"When I get to Washington, D.C., I'm going to stick out my chest and represent the Negroes in Dallas County [Alabama]."

Traveling to Washington
On buses, trains, cars, trucks, airplanes, and on foot, people traveled from every state. For many, the journey to Washington was as memorable as the day’s events. The organizers had hoped for a diverse crowd and saw their hopes fulfilled. An estimated 250,000 people—united across race, class, and ideological lines, and representing organizations, unions, churches or simply themselves—poured into Washington and onto the grounds of the Lincoln Memorial. 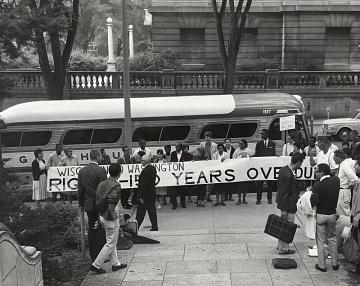 Getting on the Bus in Madison, Wisconsin

Courtesy of the UW-Madison Archives, #S00650

On the Podium
On the steps of the memorial, A. Philip Randolph opened the program and served as the day’s moderator. The program began with an invocation and included music, a tribute to the “Negro Women Fighters for Freedom,” and speeches from six civil rights groups and four supporting organizations. 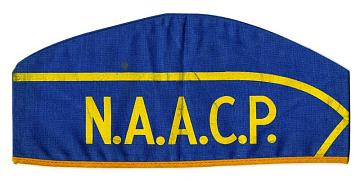 As the program began, march leaders held an emergency meeting in a small security room behind Lincoln’s statue. The Kennedy administration and moderate members of the coalition had seen an advance copy of John Lewis’s remarks, and they were furious. They thought Lewis was too critical of the civil rights bill and SNCC’s demands were too confrontational. Lewis complained about censorship and threatened to pull out of the program. But for the sake of the coalition, Lewis made last minute changes that he believed did not compromise his message.

Acknowledged as the most gifted speaker within the movement, Martin Luther King Jr. had the honor of giving the concluding address. In a day of inspiring speeches, his call for justice stands out as one of the most powerful in American history. His speech echoed the words of the Bible, the Constitution, Lincoln, and the national anthem. He wove together long unfulfilled promises, the injustices of a segregated society, and a vision of a renewed nation. In repeating “I have a dream” again and again, he summed up the aspirations of the march and the demands of the civil rights movement.

To Bear Witness
By the end of the day, an estimated 250,000 people participated in the march. They carried signs, sang along with civil rights anthems, waded in the Reflecting Pool, and listened to the speeches. Mostly, they came to bear witness, for themselves and their communities, that they would not stand by idly when the rights of so many Americans were being denied. Their presence on the National Mall was as powerful a statement as any delivered on the podium. 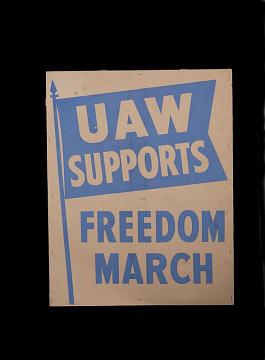 Celebrities
Stars played an important role in supporting the struggle for civil rights from its earliest days. Many threw their support behind the March on Washington. Ossie Davis, Harry Belafonte, Charlton Heston, Marlon Brando, and others organized contingents from Hollywood and New York. They brought to Washington some of the leading film, television, and music stars of the day. 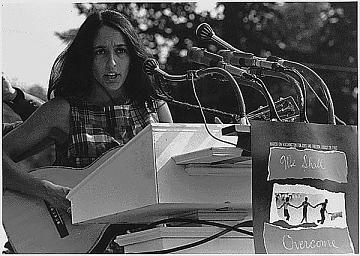 Protest music held an essential role in the Civil Rights Movement of the 1960s and on the day of the march. White folk singers included Joan Baez; Bob Dylan; and Peter, Paul and Mary joined with Odetta, Mahalia Jackson, Marian Anderson, and the Eve Jessye Chorus and others to perform throughout the day.
U.S. National Archives and Records Administration

"Uncounted millions from Accra to Zanzibar turned their eyes to Washington as they have for few other events in American history."

The Whole World Was Watching
Reporters from around the nation converged on Washington to cover the day’s events. The three national television networks interrupted their daily programming to broadcast the speeches, and a Telstar satellite beamed the coverage around the world. Recording companies quickly packaged the major addresses and distributed them to an eager audience. Long after the crowds returned home, the speeches of the day were heard again and again. 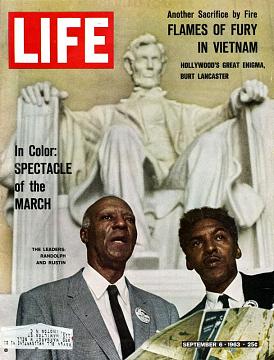 March Leaders at the White House
At the conclusion of the day's events, President Kennedy invited the march leaders to come to the White House. The group posed for photographs and briefly discussed the chances of passing the pending civil rights bill. Several pushed the president on the need to strengthen the bill in areas of employment and education. He was cordial and noncommittal. In the weeks that followed, Kennedy’s legislation stalled in Congress, and most observers believed it was destined to be defeated. 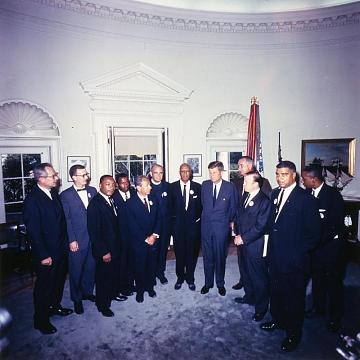 President Kennedy and administration officials meet with the March leaders at the White House.
U.S. National Archives and Records Administration

‹ Expectations and Fears up Legacy and Impact of the March ›