Skip to main content
Notice for Sunday, January 16: Due to inclement weather, the National Museum of American History will close at 2 p.m..

The Union’s Army of the Potomac

The Union’s Army of the Potomac

By 1863 the Union army had established a printing department for its Army of the Potomac, undoubtedly a consequence directly related to the invention and sale of portable printing presses. The department retained more than ten printers from several Union states until the end of the war. At least three portable presses had been purchased for the unit by that year, along with some six portable type chests. 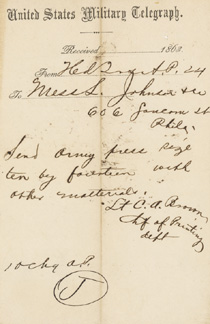 This military telegram of 1863 from Lt. Charles A. Brown, Chief of the Printing Department, Union Army of the Potomac, to the Philadelphia foundry L. Johnson & Co., requests an “army press,” size 10x14, with other materials.

The Cooley Cabinet Printing Office was the only portable press, however, advertising the same 10x14 size printing bed requested by Lieutenant Brown. Some months earlier, the then-commander of the Army of the Potomac, General McClellan, had been listed as having purchased two complete Cooley Offices.

Type Chest, Army of the Potomac

This type chest, measuring roughly 1’H x 2.5’W x 1.5’D, was purchased from L. Johnson & Company for the Printing Department of the Union Army of the Potomac. At least five other type chests were made for that unit. The top of the chest reads "Headquarters Army of Potomac, Printing Department, No. 6." A virtually identical chest marked “No. 5” is displayed at Appomattox Court House, Virginia. 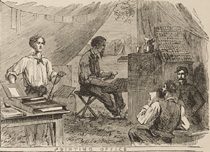 Army of the Potomac Printing Department

Eighteen-year-old Charles A. Brown joined New York’s Sixteenth Infantry Volunteers in 1861. According to census records, his older brother had been a printer before the Civil War, and might have passed on some of his knowledge and expertise on the subject. After six months, in March 1862, Charles was serving on detached duty as a printer to the Army of the Potomac’s Printing Department, where he later became the head.

After concern about his being mustered out of his unit in 1863 and leaving the Printing Department, it was arranged that he be honorably discharged from the Sixteenth Infantry Volunteers as of 1862 in order to be able to accept a commission as second lieutenant in the Army of the Potomac and continue as head and superintendent of the department. Charles Brown, along with the equipment from his department, was detailed to a government building in Washington before the end of the war. Brown was relieved of duty in April 1865.
‹ Field Printers up The Pennsylvania Thirteenth ›