Records also indicate that field units commonly printed documents in printing shops encountered in towns along the way. Larger printing presses and additional supplies of type, paper, and ink would have been available in those situations, and were often used to refill unit supplies.

Copying documents by hand was still an option for the units without presses and for less formal correspondence like letters, or single communiqués.

Printing presses, no matter how portable, were sometimes abandoned in battle situations. Equipment was left behind on occasion, and unit printers were injured or killed. Therefore, some units may have printed field documents for only a short period of time.

The documents that follow are examples of the sorts of forms, orders, letters, and newspapers that were likely printed in the field using portable presses. Because the same type, paper, and ink were used for all presses, it is difficult to determine which documents were prepared by which printing presses.

The prospectus for the Cooley printing press lists Major General Burnside as having purchased a Cooley press by July 1862. Both Union and Confederate general orders were printed using similar type fonts and formats.

This Confederate form, a requisition for stationery dated June 30, 1864, was prepared for Captain Roggen of Company F of the Army of the Confederate States of America. It requested five quires [sets of sheets, 24 sheets per quire] of letter paper, five quires of foolscap paper, and fifteen quires of envelope paper. This sort of form, with the address “in the field,” could have been both printed and filled out in field. 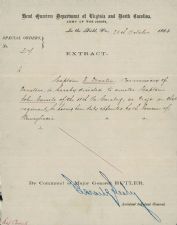 Special Order No. 314, Union Head Quarters for the Department of Virginia and North Carolina, Army of the James, October 28, 1864

This Special Order of October 28, 1864, from the Headquarters of the Union Department of Virginia and North Carolina, Army of the James, was likely printed using a portable press. Its printed address, ”In the Field, Va.” also indicates a length of stay at that address. Israel R. Sealy, signer and assistant adjutant general assigned to this unit, was responsible for the administration and the printing of his unit’s army records, among other duties. 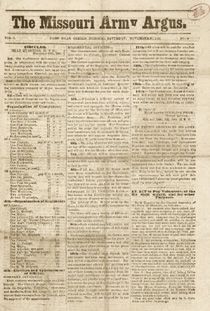 The Missouri Army Argus was a Confederate soldier newsletter printed in the field by forces under Gen. Sterling Price and published between October 1861 and May 1862. In his January 1862 edition, editor William F. Wisely writes, “We have only a little hand press . . . we publish . . . without an office.” During times between actions, it was not uncommon for units to prepare news sheets recording recent military actions, regulations, and events of interest. Hundreds of newspapers are known to have been produced by various military units. 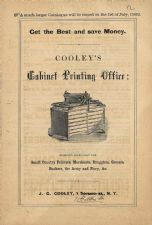 No known examples of this press still exist.
‹ Portable Printing Presses (page 2 of 2) up Field Printers ›