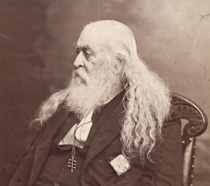 Before the Civil War, Albert Pike had been the owner of the Advocate, a newspaper out of Little Rock, Arkansas. He was commissioned in the Confederate army as a brigadier general in 1861, and during the war he was charged with the command of the Indian Territory. Referring to his ability to print during the War, Pike wrote “. . . having purchased a press, I print my own blanks . . .” 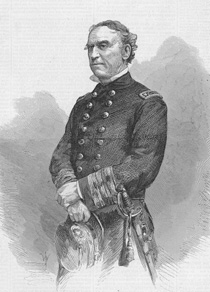 Remembered to have exclaimed “Damn the torpedoes, full speed ahead,” David Farragut, a Tennessee native, served in the U.S. Navy beginning in 1810. During the Civil War he was given the rank of rear admiral in the Union forces for his success in the battle for New Orleans. He was later involved in the 1864 attack on the mine- and torpedo-filled Mobile Bay. Farragut was listed as having purchased an Adams Cottage Press for his fleet.
This document, dated April 10, 1865, is an example of the prisoner parole pass printed and issued to some 28,000 Confederate soldiers at Appomattox Court House at the end of the Civil War. 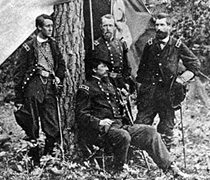 Assigned the rank of major general in the Union forces in 1864, John Gibbon commanded the 24th Corps, Army of the James, at the time of the Appomattox Court House surrender. He was given the task of accepting the surrender of the Confederate Army of Northern Virginia. He offered his services to quickly print some 28,000 blank parole documents to legalize the status of Confederate troops under the terms of the surrender and to assist them to return home safely. Gibbon “had a small printing press and could have blank forms struck off which could be filled in and one given to each officer and man of the [Confederate] army . . .”

“My corps press was at once set to work to print off the requisite number of blank paroles but it soon became apparent that our few printers would speedily break down at the task, some 30,000 blanks being required. The Adjutant General reported that the press would have to be run all night and probably all the next day. I, therefore, directed him to send out and make a detail of the necessary numbers of printers to supply relays for the press until the job was finished. This was done; we obtained all the printers we wanted and the next day the paroles were ready for distribution.”

An 1865 advertisement for the Lowe printing press discusses the ability to print some 300 to 500 documents in one hour. The Cincinnati Type Foundry’s Army printing press was advertised as being able to print between 200 and 300 impressions in an hour.

The paroles were likely printed in groups, using the text for three or more paroles to a page, which would allow for the total to be completed in about 24 hours.

This document, dated April 10, 1865, is an example of the prisoner parole pass printed and issued to some 28,000 Confederate soldiers at Appomattox Court House at the end of the Civil War.
‹ Civil War Documents up The Union’s Army of the Potomac ›