“Every Man His Own Printer!” advertised the makers of the Lowe and Adams presses. Easy to use, these presses inspired military and amateur printers during and after the Civil War to make use of portable presses to print military orders, receipts, billheads, and other documents.

Albert Adams's New York cylinder press was described as useful for the armed forces and merchants. It was patented on March 19, 1861, and manufactured and distributed by entrepreneur Joseph Watson and the Adams Press Company in New York.

The Adams Cottage printing press was designed without a frisket. The frisket, a separate inner frame hinged to the cloth-covered tympan, served to hold the paper in place and protect the printed sheet. The press included an automatic tympan which closed with the movement of the cylinder. Adams’s press and other portable presses did not include a self-inking system. The type was inked by hand, a sheet of paper was placed over the inked type, and the bed of the press was cranked below the cylinder to produce an impression and the printed sheet.

Advertisement for the Adams Cottage Press, about 1864

Kits for the Adams Cottage printing press were sold in five different sizes, to fit different needs and to enable the production of different-sized documents. The kits, along with the press, included printing equipment such as type, rollers, and ink.

The advertisement reads: “To the army and navy . . . they will be found very useful. They can be packed within the compass of a common traveling trunk, and transported any distance without injury. We have supplied quite a number of regiments with portable printing offices, and they have given universal satisfaction. Rear-Admirals Farragut, Goldsborough and Bailey have each one of our printing offices in their respective fleets.” 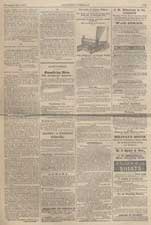 This advertisement in Harper’s Weekly for the Adams Cottage printing press appears to have introduced the press, as later advertisements became much smaller in size. One of the testimonials printed here from the quartermaster of the New York Volunteers reads that the press “has done the work of the entire Brigade, Orders, Countersigns, Invoices, Receipts, &c.” and that “every quartermaster in the service [should] procure one immediately.”

Samuel W. Lowe of Philadelphia invented the Lowe printing press, an unusual conical cylinder press patented in 1856. Like the Adams Cottage printing press, it did not include a frisket and also included an automatic tympan. The frisket, a separate inner frame hinged to the cloth-covered tympan, served to hold the paper in place and protect the printed sheet. The press included an automatic tympan which closed with the movement of the cylinder. The rights for the press were sold in 1858 to Joseph Watson, who marketed the press in Boston and Philadelphia.

The Lowe printing press does not appear to have been as heavily advertised as Adams’s press, although the company notes that “we have sold many presses . . . to druggists . . . in this country and in other lands. Every boy and business man seems to be having one.”

As for portability, the Lowe was more than a third lighter than the Adams, ranging from between 12 and 120 pounds as compared to the Adams printing press at between 100 and 400 pounds. The Lowe used a simpler frame and relatively thin castings.

Advertising brochure for the Lowe Press from the Lowe Printing Company, Boston, about 1860

Five sizes of the Lowe printing press with kits were sold, with printing beds of between five by six inches and thirteen by seventeen inches. These dimensions reflect the range of sizes for completed printed documents.

From advertising brochure for the Lowe Press from the Lowe Printing Company, Boston, about 1865

One of the Lowe printing press advertisements included examples of the fonts of type available for sale with the Lowe kits. They were sold with three sizes and three fonts of type, described as both plain and fancy.

The brochure reads “We have sold many Presses to the Army and Navy, to printers, druggists, medicine dealers, merchants, clergymen, lawyers, mechanics . . . in the country, the Canadas, and in other lands.”