The intimate connections between human and animal health are nowhere as apparent as in the study of infectious disease. Even a cursory examination of the history of bacteriology and virology reveals that relationships among humans, animals, and microbes have been foundational to investigations of the causes, prevention, and treatment of disease. Every vaccine owes a debt to the cow (vacca in Latin) and the realization that a dose of a cow disease—cowpox—could provide humans with protection from the dreaded smallpox.

Vaccines for animal diseases were the first to result from laboratory-based scientific investigation. French chemist Louis Pasteur developed a vaccine for chicken cholera in 1879, and one for anthrax of sheep and cattle in 1881. Pasteur tested his rabies vaccine on animals in 1884—within a year, the vaccine’s success prompted its use on humans bitten by suspected rabid dogs.

Animals have been both the recipients and the sources of vaccines and serums. Antitoxin manufacture required large animals, usually horses, to produce the antibody-rich blood serums for human use. Similarities between animal and human immune functions, as well as a shared susceptibility to the microbial pathogens, undergirded the success of these methods.

The economic importance of livestock spurred governments to support research to understand and control animal disease. Responding to extensive disease-related losses in the cattle and pork industry, in 1884 the United States government established the Bureau of Animal Industry (BAI) within the Department of Agriculture. The Bureau’s research and programs proved profoundly beneficial to the livestock industry, while also spurring the growth of the veterinary sciences. 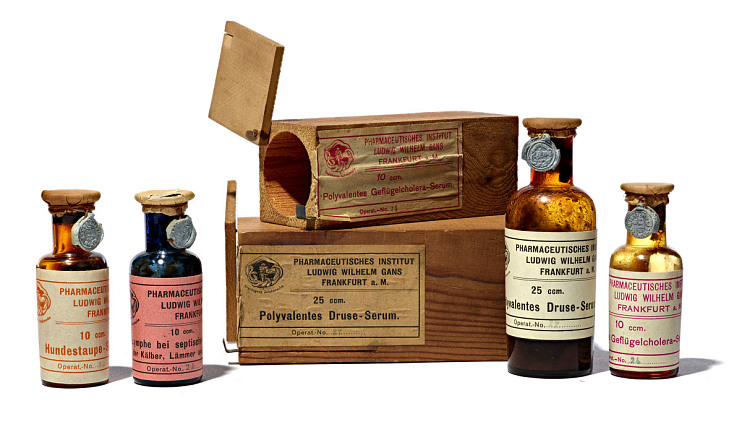 Early 20th-century serums for canine distemper, chicken cholera, and other livestock infections made by Ludwig Wilhelm Gans, Frankfort, Germany. These specimens are part of a vast collection of “business ephemera” amassed by Isadore Warshaw and purchased by the museum in 1967. The collection proved to be an unexpectedly rich source of material for the medicine collections.

For the most part, the Smithsonian’s curators of medicine did not actively acquire or exhibit veterinary medicine. The museum’s veterinary holdings are largely a by-product of collecting from pharmaceutical firms and drug retailers that dealt in both human and animal health products. Diseases that clearly cross boundaries—such as rabies—are better represented in the collection than those of a purely veterinary concern.

The following are some highlights from the museum’s collections of veterinary biologics: 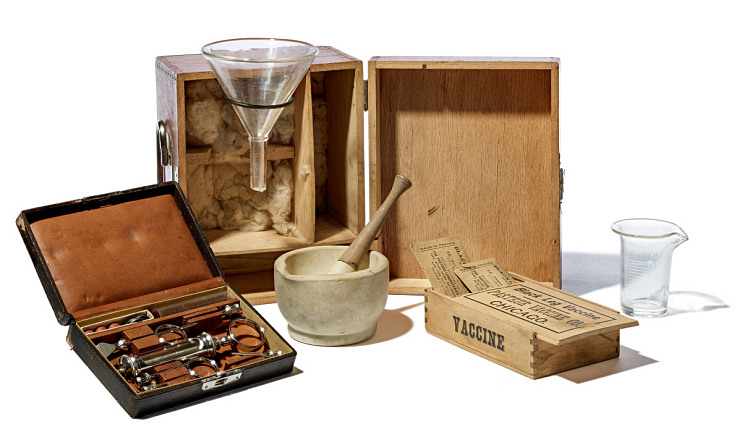 Blackleg, also known as black-quarter or quarter-evil, is an infectious, usually fatal, disease of cattle and sheep caused by the bacterium Clostridium chauvoei. By the late 19th century, the disease was causing heavy losses to cattle herds in the western United States. The Pasteur Institute introduced blackleg vaccination kits beginning about 1895. The kit included a mortar and pestle, a glass funnel with linen filters, and a complete syringe set, along with packets of blackleg vaccine. To use, the vaccine powder was first finely ground in the mortar and mixed with water. The resulting solution was filtered through linen, and then injected into the animal’s tail, ear, or shoulder.

Diagnostics for Bovine Tuberculosis and Glanders 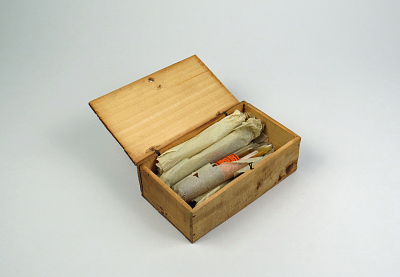 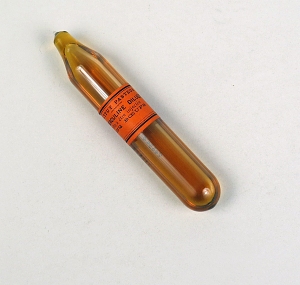 A box of ampules of Tuberculin and Mallein made by the Pasteur Institute in Paris, early 20th century.

Testing for tuberculosis in cattle began in the 1890s, not long after the discovery of tuberculin by German bacteriologist Robert Koch. Tuberculin was essentially a broth of the tubercle bacillus (the bacterium that causes tuberculosis) which was heated and filtered to remove the infectious organism. Although it was introduced as a treatment, or vaccine, for tuberculosis, its real value lay as a diagnostic agent. If an animal or human was infected with the disease, an injection of tuberculin would induce a measurable rise in temperature. In the skin test for tuberculosis, introduced in the early 20th century, infection is indicated by a visible local reaction at the site of injection. The test is critical for control of the disease, especially as individuals can harbor symptomless infections that can spread to others.

Testing for glanders, a highly infectious and mostly fatal disease of horses, is based on the same principles. The diagnostic agent, Mallein, is produced from the bacteria Bacillus mallei (or Burkholderia mallei), which is responsible for the disease. Its use as a diagnostic also began in the 1890s.

Both diseases can be transmitted to humans and pose a serious health threat. In the early 20th century, bovine tuberculosis caused an estimated 20–25% of human tuberculosis cases in the United States. The disease was often spread through infected milk, and disproportionately affected children. Pasteurization of milk, along with an aggressive eradication campaign launched in 1917, vastly reduced the incidence of bovine tuberculosis in this country. 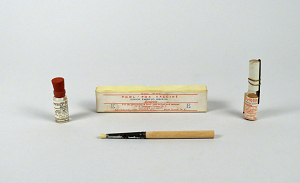 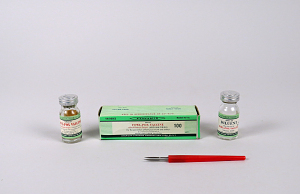 Two samples of Fowl-pox vaccine: Lederle Laboratories vaccine (left), ca 1941, and American Cyanamid Company vaccine, ca 1959. The Lederle vaccine uses the “follicle method” of application and includes a short, stiff-bristle brush applicator. After plucking four or five of the bird’s feathers, the vaccine was vigorously brushed into the follicles. The Cyanamid vaccine uses the “stick method” and includes a two-pronged needle applicator. The needle was dipped in vaccine and then quickly jabbed through the bird’s wing web.

Fowl pox, also known as bird pox or bird diphtheria, is caused by a virus from the pox family. Similar to smallpox or chicken pox, which infect humans, this disease is characterized by the formation of pus- filled blisters, which dry out and scab over. Early 20th-century vaccination attempts used injections of ground scab material in saline solution to provoke immunity. Beginning in the 1920s, vaccine applications though superficial stabs to the skin or directly to feather follicles replaced the older injections.

By the 1940s, a live-virus fowl-pox vaccine was available. The vaccine used virus grown in chicken embryos, a relatively new propagation method that is still critical for the manufacture of vaccines. The dried vaccine material was packaged with a vial of diluent for reconstituting the vaccine, and included an applicator brush or stick vaccinator. 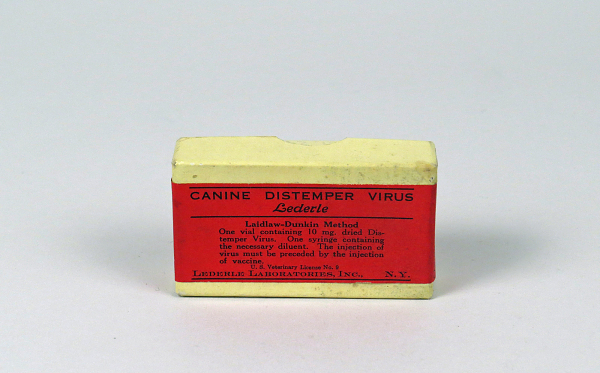 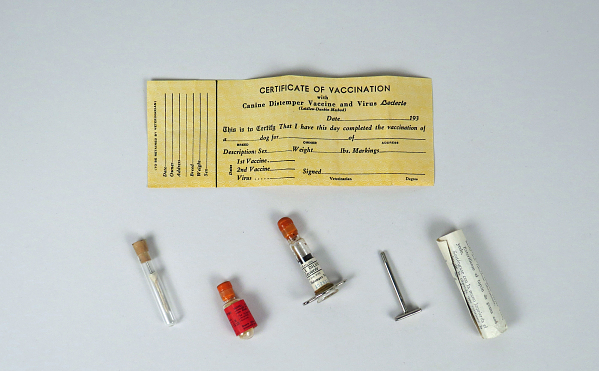 Canine distemper is an infectious disease of dogs, foxes, minks, and ferrets. Although it is caused by a virus, secondary bacterial infections are responsible for many of the serious complications that arise from the disease.

In 1901, French pathologist Henri Carré identified a “filterable virus” as the cause of distemper, but his findings remained disputed for the next twenty years. After World War I, the British National Institute for Medical Research established a program to produce a vaccine. Scientists Patrick Laidlaw and G. W. Dunkin developed a two-step process: first a killed-virus vaccine was used to stimulate immunity; two weeks later, a dose of live virus was injected to produce a stronger, longer-lasting immune response. Once the British field trials proved successful in 1928, Lederle Laboratories and Mulford Laboratories began commercial production in the United States.