Mathematical Paintings of Crockett Johnson -- About 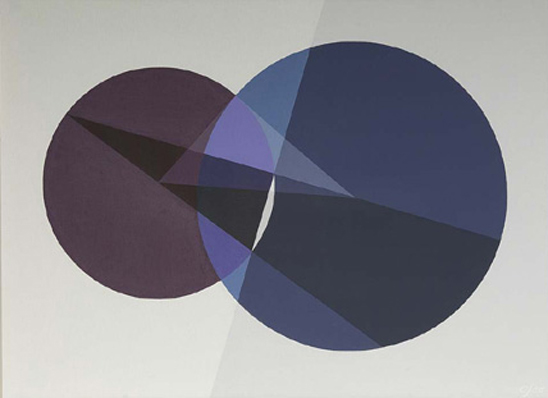 CJ, as he signed himself, first became known to the general public through the cartoon strip Barnaby which ran in the 1940s and again in the early 1960s. It featured five-year-old Barnaby Baxter, his family, and Mr. O’Malley, his cigar-smoking “fairy godfather.” Their adventures appeared in a few dozen newspapers and were collected in paperback books. Crockett Johnson also illustrated and wrote children’s books, most notably Harold and the Purple Crayon.

Crockett Johnson was not alone in finding mathematics an inspiration for art. Contemporary painters such as Piet Mondrian, Ad Reinhardt, Josef Albers, Alexander Calder, and Richard Anuszkiewicz used geometric forms in their paintings. Artists like Alfred Jensen paid tribute to mathematicians in paintings like Honor Pythagoras – Per I – Per IV (1964).

Crockett Johnson was unusual in that he linked geometric constructions and specific mathematicians. As he explained to artist friend Ad Reinhardt in 1965, he planned “a series of romantic tributes to the great geometric mathematicians from Pythagoras on up; in other words the shapes and disciplines are pilfered (but interpretation is the greatest form of plagiarism and besides I am very willing to share credit with Euclid, Descartes, et al).”

He based his early paintings on diagrams in a volume compiled by James R. Newman entitled The World of Mathematics (1956). As time went on, he took a more active interest in following the mathematical arguments in books, and then began to develop his own geometric constructions. This led him to two mathematical publications, one on estimating geometrically the value of the number pi and another on constructing a polygon with seven equal sides.

Crockett Johnson did not attempt to master all the technical details of painting. He preferred to do small paintings, to paint on masonite rather than canvas, and to use house paint mixed at a local hardware store. His paintings were shown at the Glezer Gallery in New York City, at the IBM Gallery in Yorktown Heights, New York, at the General Electric Gallery in Fairfield, Connecticut, and at what is now the National Museum of American History. Many of the works adorned the walls of his home in Connecticut and were treasured by him and by his wife, the author Ruth Krauss. One painting was donated to the Museum in1975, the others were given in 1979. In recent years, the paintings and Crockett Johnson’s work in general have received attention from several scholars.