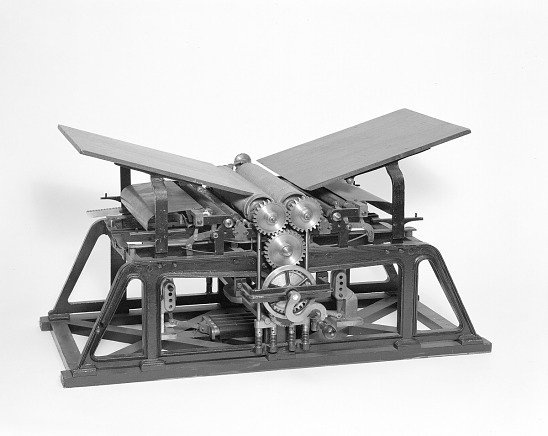 Of the 10,000 patent models held in this Museum, some 400 models are housed in and relate to the Graphic Arts Collection. These include models prepared for the printing, type, paper, and bookbinding trades.

Black and white photographs of many of the 400 plus patent models in the Graphic Arts Collection were taken in the 1960s. We hope the publication of these photographs will also assist the public in better understanding the Collection.

“Until 1880, the U.S. Patent Office required most inventors to submit a model with their application for patent protection. The Patent Office thus became the keeper of a huge collection, one that suffered several catastrophes over the years. In 1836 a fire at Blodgett's Hotel, where the Patent Office was housed, destroyed all existing models—about 10,000 items—as well as the records of some specifications. After the fire new patents, hitherto unnumbered, were numbered in a consecutive series. In 1840 an effort was made to restore models and specifications lost in the fire. Some 2845 were restored (and numbered in a new X... series), but there were gaps that could not be filled and remain blank to this day. In 1887 a second fire started in a loft in the Patent Office where 12,000 rejected models were stored. It spread rapidly, destroying or damaging 114,000 more models out of the total collection of around 200,000. Of these, 27,000 were eventually restored, while 87,000 were lost.

The largest single group within that transfer—about 4,000—consisted of models for the textiles industry. More than 300 were for the printing trades. Other printing models have arrived since 1926, singly or in small groups.”

For more information about the Museum’s patent model collection, see Patent Model Index, Guide to the Collections of the National Museum of American History.