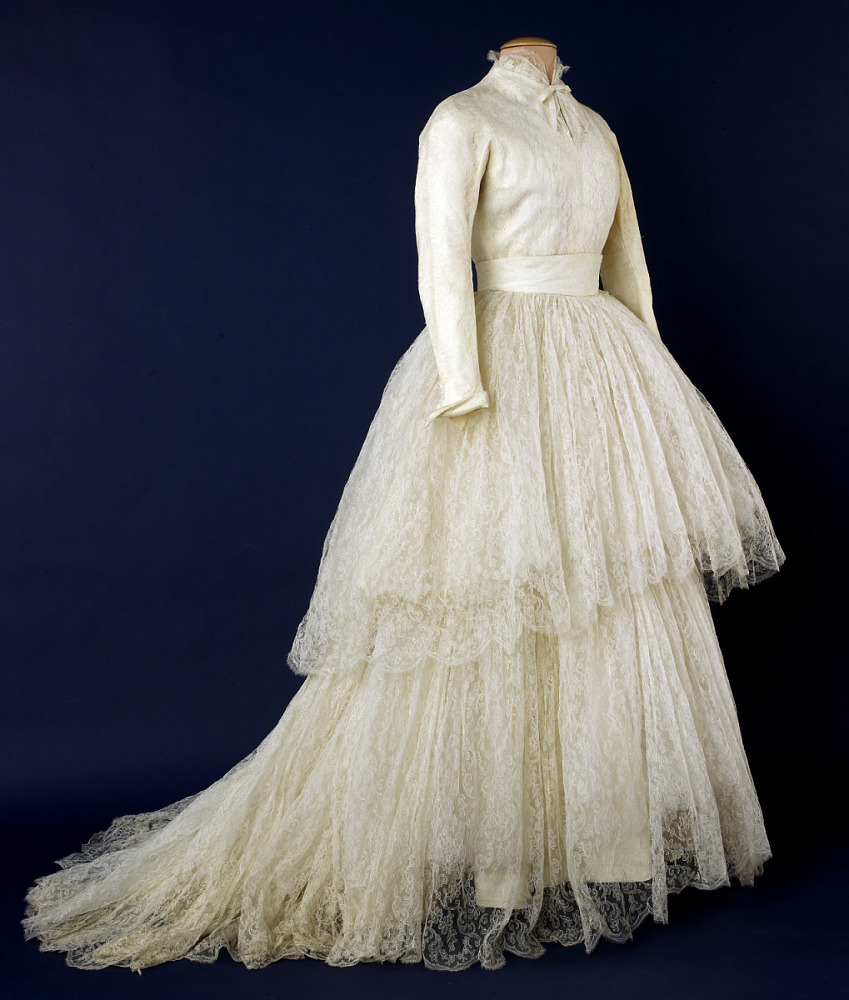 Description
This dress, custom designed by the renowned French fashion designer Christian Dior, was worn by Rena Kipnis Sherman at her wedding to Henry Sherman in June 1956 in New York City. The bride’s father, Leon Kipnis, was an accountant whose firm represented Christian Dior in the United States. Dior gave this dress as a personal wedding gift to the family. Dior designed for many celebrity clients, including Olivia de Havilland, and he designed her wedding dress as well. It is believed by the donor, Joyce Rudick, that the fabric and style for this dress were chosen in Paris and made to measurements supplied to Dior in Paris. The dress was then altered after being sent to the United States. The dress echoes Dior’s earlier “New Look” style with the rounded shoulders, cinched waist, and long full skirt of luxurious fabrics. Dior liked the transparent look and feminine lightness of patterned lace, which is seen in this dress.
Christian Dior was born on January 21, 1905 to a wealthy family in Granville, Normandy, France. After studying political science, he served in the military for two years. He then began his fashion career by selling sketches of hats to Parisians in 1935. Before and after WWII, Dior worked for a number of design houses, but in 1946, he launched the House of Dior backed by the textile manufacturer Marcel Boussac. By 1958, he had salons in fifteen countries. Dior was particularly known for the “New Look,” which was his first collection in 1947. It featured narrow shoulders, a constricted waist, and a long, very full skirt. Dior felt that the postwar era was the time to bring femininity back to fashion, and the opulent clothing style he created helped to re-establish Paris as the center of the fashion world. The designs of Dior represented consistent elegance, and his name was synonymous with luxury and haute couture. During the 1950s, Dior continued as a trend setter and dictated style with the themed collections he created. After Dior’s sudden death in Italy on October 24, 1957, Yves St. Laurent, his assistant for four years, took over as head designer. Although Christian Dior only designed under his own name for a decade before his death, he was one the most important and influential designers of his era.
This white lace wedding dress consists of a fitted lace bodice and a tiered skirt section. The bodice is constructed of white silk lace over white tulle and taffeta, with a center front seam and bust and waist darts. The taffeta peplum extends under the skirt section to create a smooth line. The long sleeves with pointed turned-back cuffs are darted at the elbows and are set in at the front armholes but dolman style at the back with gussets. A center back opening has seven laced covered buttons with bound buttonholes. The front neckline is open partially at the center front seam and is trimmed with two layers of scalloped lace to create a jabot effect. A V-neckline is created at the front with four layers of scalloped lace extending into two layers of scalloped lace at the back neckline. A narrow bow trims the center front neckline. The skirt section consists of two gathered tiers that are constructed of three layers of tulle and one of net under each upper layer of lace. The upper tier extends longer at back and the lower tier forms a trained effect at hemline. The net layer of the lower tier is attached to an under skirt lining with a wide bias hem reinforced with horsehair for stiffness. The skirt section is attached to a contoured waistband that is three inches wide at front tapering to two inches at back with a hook-and-eye closure at the back. The waist measures 24 inches.
Location
Currently not on view