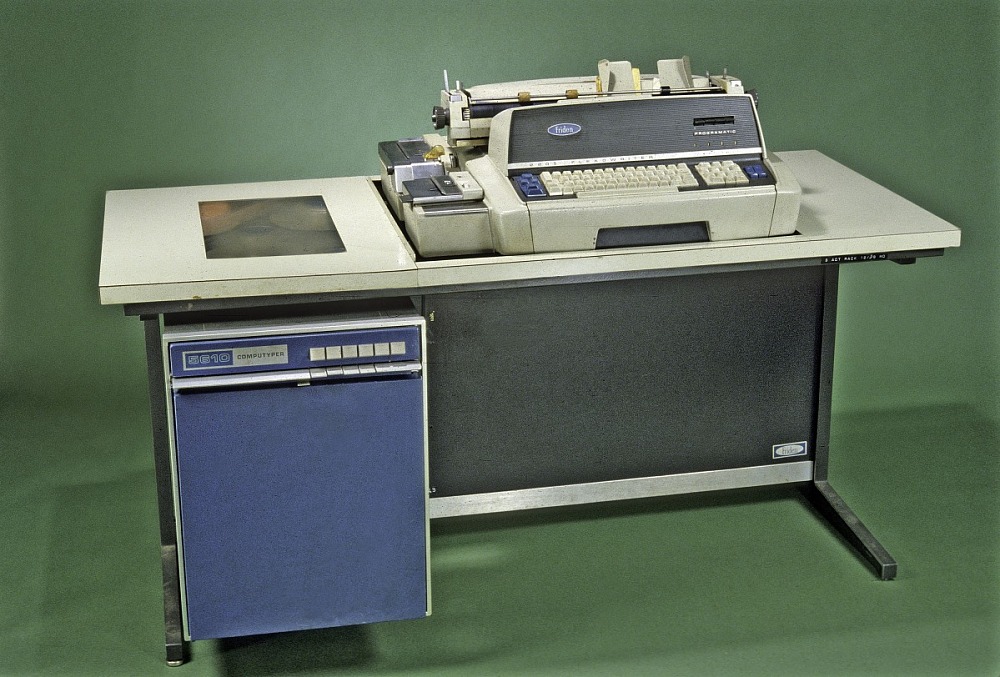 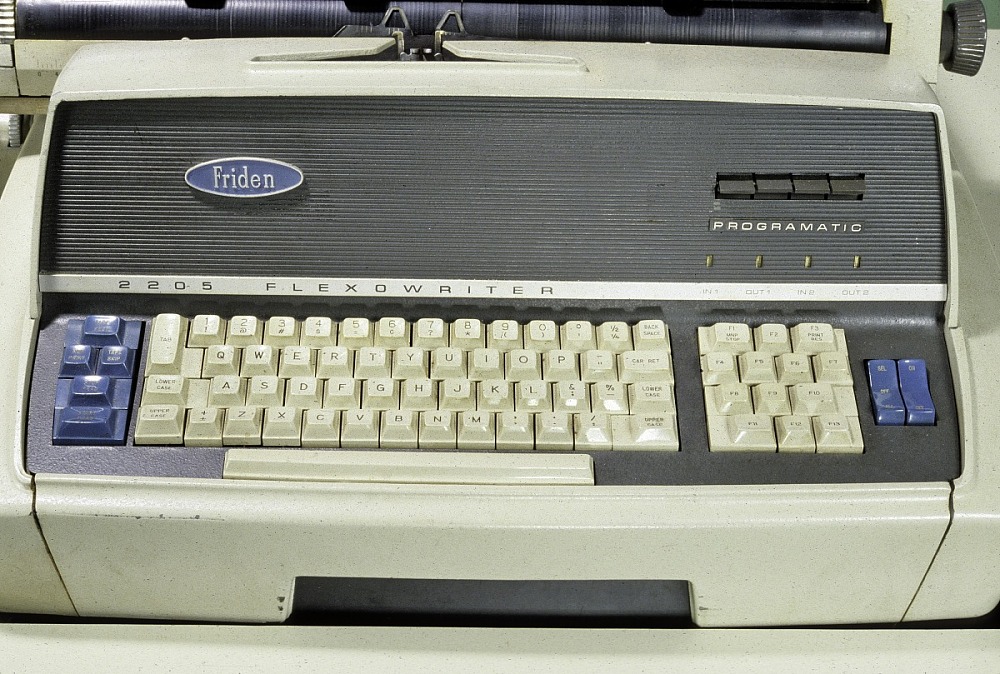 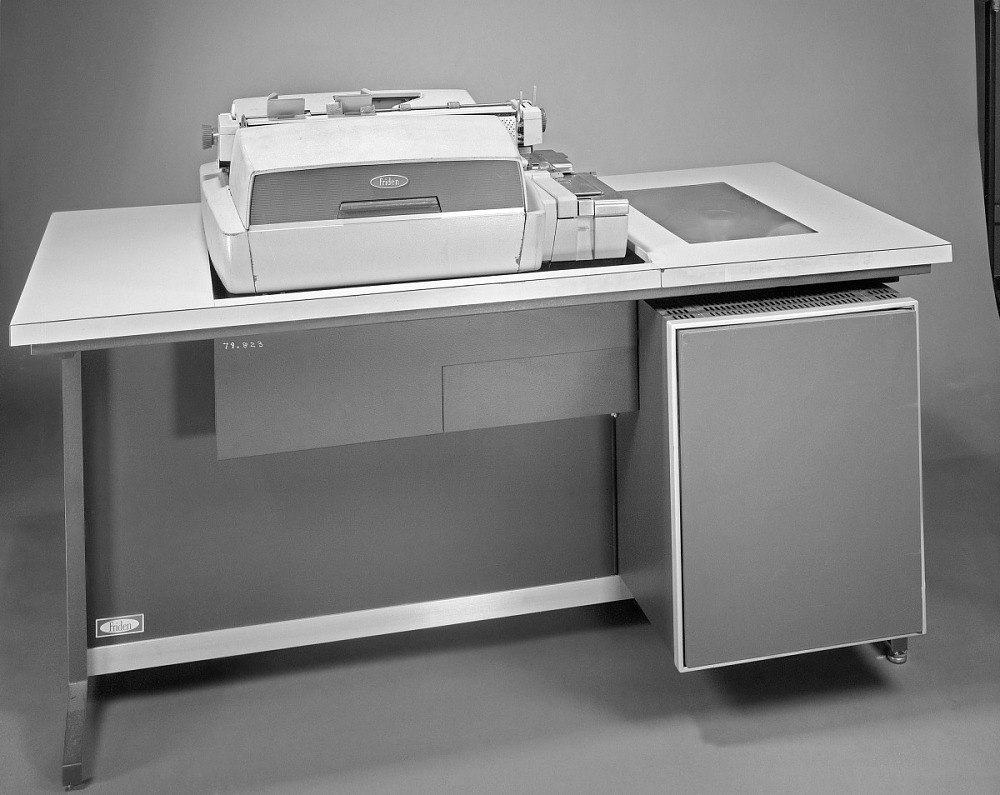 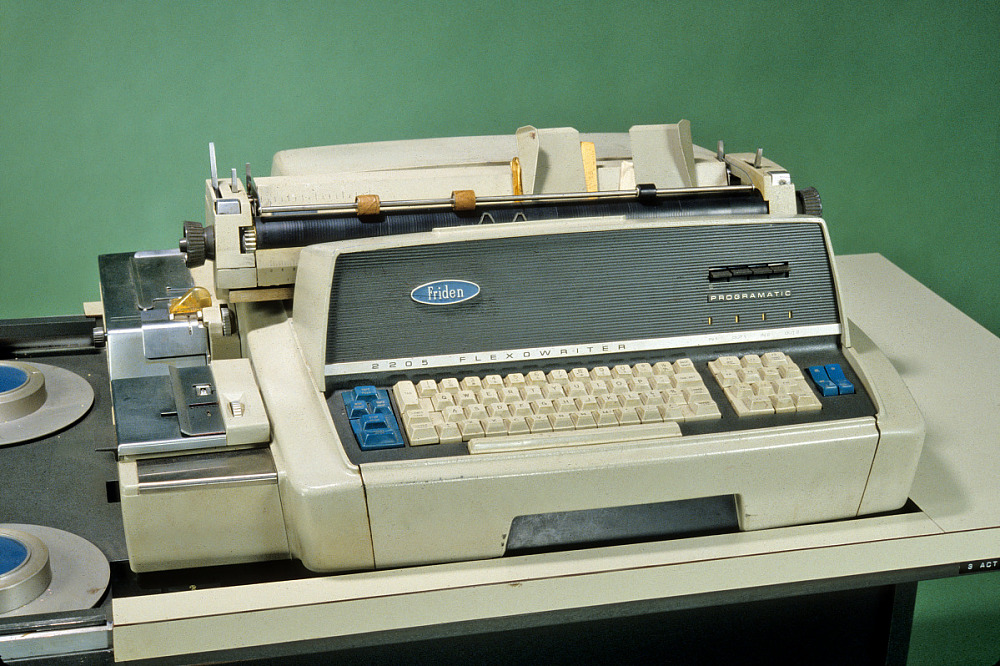 reply
I was a “systems salesman “ with Friden in the early 1960s selling Flexowriters and Computypers. The original Computypers actually had a Friden mechanical rotary calculator in the cabinet to do the calculations They were not “electronic” until about 1965.

reply
This computyper was manufactured before 1969, because I used it in 1966 and 1967 for invoicing at Philco Ford in North Wales, PA. It was placed at the back of our office because of the noise level, but I liked using it. I was 21 years old at the time and this was the first piece of automated office equipment I’d used. The photo brings back fond memories. Thank you.

reply
I was trained to repair this machine in the International Training school Berg an Dal Nijmegan, Holland. The course was about a month long. There was an exam at the end of each weeks training and if you didn't pass you had a problem! I think the tutor was Jan Ke Boom or similar. I have class photos taken at the time. I found it very difficult to repair primarily because of the delay-line memory. all data was moving all of the time!

reply
I loved this machine. I used it in the 1970 for billing and credits., we just put a minus sign in front of the totals to send our credits out. It was noisy but I loved it.

reply
I love this machine, I love programming language SWITH, like mini Assembler, with priferal units, readers and punch tapes. We received this machine with all perriferals and documentations at Labs - Catedra de Informatica a ASE, Bucharest, For teaching students. I created many Informatic systems, like retribution , analysa statistica a quality industrial production etch.

reply
I purchased a Friden 5610 Computyper surplus from Mountain Home Air Base in 1976. The 5610 was a 650 lb. desk with a electric typewriter and was not functioning, I found an open diode in the circuit and forced it into an error loop and was able to have it print out from this error loop. My interest sparked by this amazing machine, I found a service tech. in Boise, Idaho and found out that there was only one 5610 in the state of Idaho. He agreed to sell me the tech manual if I would purchase all his supplies. While studying the manual I discovered the unit had 44 commands, 70 storage registers and math co-processor with 5 registers. I proceeded to write my first accounts receivable program in machine code then using function keys to activate each routine and stored it to paper tape so I could run the program by loading it from the stored paper tape. A good predecessor to the computers in 1978.

reply
"I am currently working with a student at the University of Iowa on restoring a Singer/Friden model 2201 Flexowriter that is visually similar to the 2205 Flexowriter that is part of this object. It was used by a bank in Coralville Iowa to type dunning form letters to people who owed money in the late 1960s and into the 1970s., when it was replaced by a computer. I am putting up a web site with photos of the innards, connections to the relevant patents and other documentation. See: http://www.cs.uiowa.edu/~jones/flexo/ for the current state of this effort."

reply
I operated a flexowriter computyper way back in 1970-1973 at Merchant & Evans, a firedoor manufacturer in south Philadelphia. I remember it had two different maybe 6 X 8 inch blocks, I forget what they were called, but one was for accounts receivable and the other for accounts payable. But I remember when it would break down, I had to call IBM to send someone out to fix it. So, it was interesting reading up on my old machine. They also had a bookkeeping machine that was gigantic and when it was on and running, every time it would hit the tab stops the whole office shook. Lol!

reply
"I am a former Singer/Friden Technician who was factory trained on the 5610. You couldn't purchase a 5610 without a Flexowriter as it was it's primary I/O and print station. Input was from keyboard or paper tape reader. Output was to the print station or paper tape punch. Auxillary / peripheral units were available. These include a high speed paper tape reader, paper tape punch, IBM Card Reader, and an interface unit for an IBM 026 Card Punch. Memory for the 5610 was an acoustical delay line. It was approximately 50' of piano wire spooled on nylon spacers.It provided 1100 characters of storage. (7 ascii bits to a character) A bit was a 4 nanosecond twist placed upon the wire that "rang " around the spool and had to be regenerated when it reached the end. Data reads were destructive. When you took a character off the delay line a "marker " character was put in it's place, When the delay line "wrapped " to the marker the character was put back in place of the marker.The 5610 was primarily used in accounting , billing, and inventory applications I also had themon Kennedy Space Center, Patrick A.F.B., and Postal Sort Stations A typical installation cost about $24000. in 1969. The Flexowriter could be purchased as a separate stand-alone type station for about $2200."

reply
"I love this computer machine. I did programming in SWIFT, retribution, accounting, and teach students about this operating, programming andpaper tape used at ASE Bucharest"