Group of Coal Mine Workers, Pennsylvania, 1911

Group of Coal Mine Workers, Pennsylvania, 1911 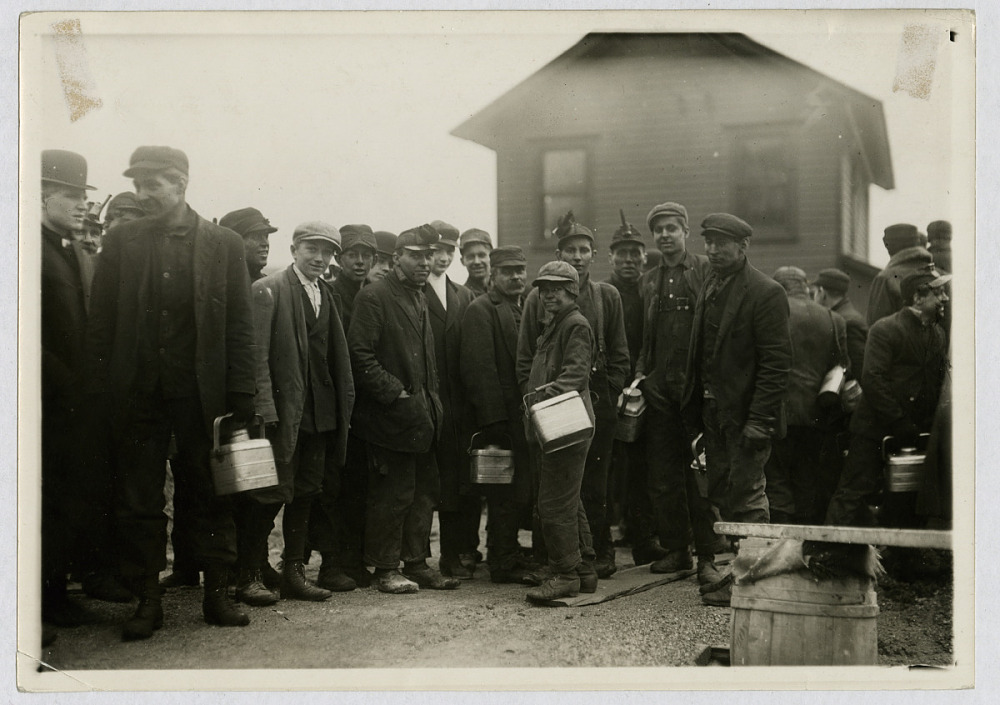 Description (Brief)
A Lewis Hine silver print circa 1906-1918. This image is one in a series of photographs made for The National Child Labor Committee. The image is of a very dirty looking group of men and boys outside of a building. Many are carrying tin boxes.
Description
Lewis Hine was born in Oshkosh, Wisconsin to a working class family. He was orphaned at the age of fifteen and forced into the workforce. While supporting himself, Hine managed to continue his education. After high school graduation he worked a few odd jobs and then in 1900 eventually enrolled at The University of Chicago. At the University Hine studied Sociology. While taking classes, Hine came to know Frank Manny a professor at the State Normal School. Manny had recently received a job offer to be the superintendent of the Ethical Culture School in New York City. Hine decided to join his new friend and in 1901 moved to New York to teach at Manny's school. Hine continued to pursue his degree in Sociology at New York University. It was during this period that Hine began to use a camera. At first, his interest in photography was simply as a means to educate students and to document school events. However, Hine was quick to take an interest in photography and ultimately this new medium would become the means through which he could express his growing social concerns, especially about child welfare.
In 1904, Hine began his first photo essay. In an attempt to counter growing anti-immigration sentiment amongst New Yorkers, and Americans in general, Hine began a project to photograph immigrant families arriving at Ellis Island. Instead of making them appear pathetic or even animalistic, as other photographers were doing, Hine photographed these people with a humanitarian eye. He depicted them as brave, dignified pioneers of a new land. Hine's camera was a 5x7-plate box-type on a tripod. Often he had to work in low light. If he was indoors, Hine usually had only one chance to photograph an image because after he used a magnesium flash powder to create artificial light the room would fill with smoke, obstructing the image.
In 1905, Hine received his degree from NYU and began considering a career in Sociological Photography. By 1908, he had left his teaching job for a full time position as an investigative photographer for The National Child Labor Committee (NCLC). His first commission from the NCLC was to photograph home workers, children and adults, in New York City tenements. Hine was horrified with what he saw, he described the conditions as "One of the most iniquitous phases of child slavery." Later that year Hine, on commission from the NCLC, left New York to photograph child laborers all over the United States. In 1909 Hine published his first photo essay on children at risk. The essay was comprised of material from the first years of his tour of the United States.
Throughout his career many more photo essays would follow, alerting the public to the plight of these American children who were obviously in such grave danger in their working environments.
Hine's work also took him to Europe in 1917. Funded by the Red Cross he photographed European refugees of World War I. In the 1920's, Hine returned to America and to Ellis Island to once again photograph newly arrived immigrants. Although Hine was a pioneer in 'Sociological Photography' and he had vastly increased public awareness about child labor, he still struggled to make a living.
In 1930, ten years before his death, Hine received the honor of photographing the construction of the Empire State Building. For a change, Hine focused on the joyful and productive side of labor instead of the dark side. Lewis Hine died in 1940. As a photographer, Hine left a resounding impact on the worlds of journalism and art, pioneering a new form of storytelling that today we call photojournalism.
Location
Currently not on view