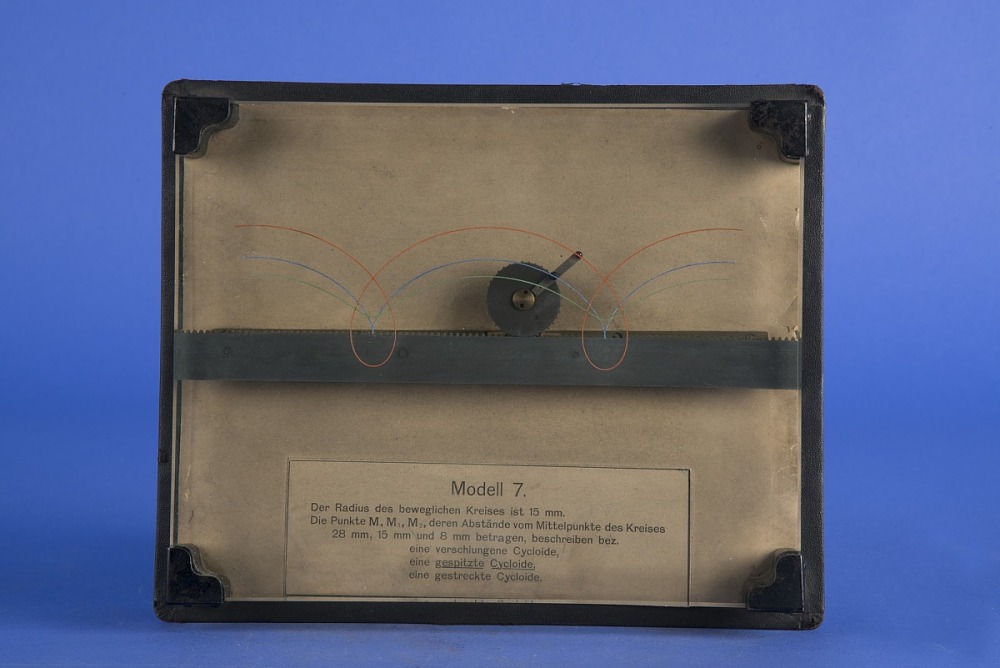 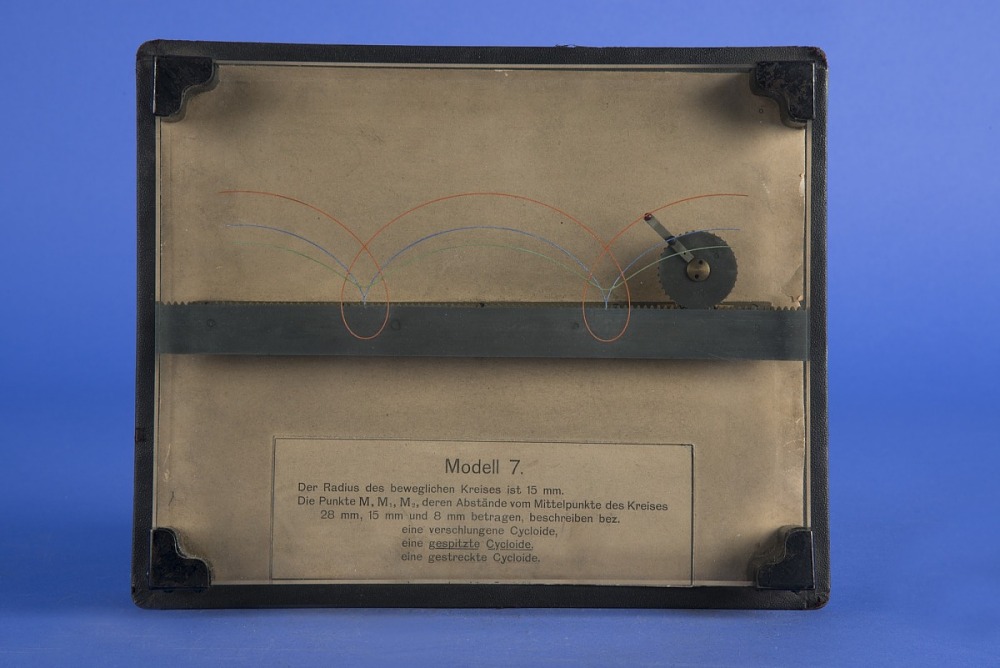 Description
Around 1900, American mathematicians introduced ideas to their students using physical models like this one. This model is the seventh in a series of kinematic models sold by the German firm of Schilling to show a mechanical method for generating mathematical curves.
The cycloid solves the 17th-century problem posed by Swiss mathematician Johann Bernoulli known as the brachistochrone problem. This problem asks for the shape of the curve of fastest decent: the path that a ball would travel the fastest along under the influence of gravity.
The cycloids are drawn by tracing the location of a point on the radius of a circle or its extension as the circle rolls along a straight line. Cycloids are members of the family of curves known as trochoids, curves that are generated by tracing the motion of a point on the radius of a circle as it rolls along another curve. The curve generated by a point on the circumference of the rolling circle is called an epicycloid, and a ball rolling on this curve (inverted) would travel faster than on any other path (the brachistochrone problem). Points either inside or outside the rolling circle generate curves called epitrochoids. The cycloid also solves the tautochrone problem, a curve for which a ball placed anywhere on the curve will reach the bottom under gravity in the same amount of time.
An example of the application of the cycloid as a solution of the tautochrone problem is the pendulum clock designed by Dutch physicist Christopher Huygens. As the width of the swing of the pendulum decreases over time due to friction and air resistance, the time of the swing remains constant. Also, cycloidal curves are used in the shaping of gear teeth to reduce torque and improve efficiency.
This model consists of a toothed metal disc linked to a bar that is toothed along one edge. A radius of the circle extending away from the bar has a place for a pin inside the circumference, a pin on the circumference, and a pin outside the circle. Rotating a crank below the baseplate of the model moves the circle along the edge of the bar, generating a curve above each point. The curves are indicated on the glass overlay of the mechanism. The curve generated by the point on the circumference of the circle is an epicycloid, depicted in blue on the glass; that generated by the point outside the circle is a prolate (from the Latin to elongate) cycloid, depicted in orange; and that generated by the point inside the circle is a curtate (from the Latin to shorten) cycloid, depicted in green. The German title of this model it: Erzeugung von Cycloiden (to produce cycloids).
References:
Schilling, Martin, Catalog Mathematischer Modelle für den höheren mathatischen Unterricht, Halle a.s., Germany, 1911, pp 56-57. Series 24, group II, model 7.
Online demo at Wofram Mathworld: http://mathworld.wolfram.com/Cycloid.html
Location
Currently not on view