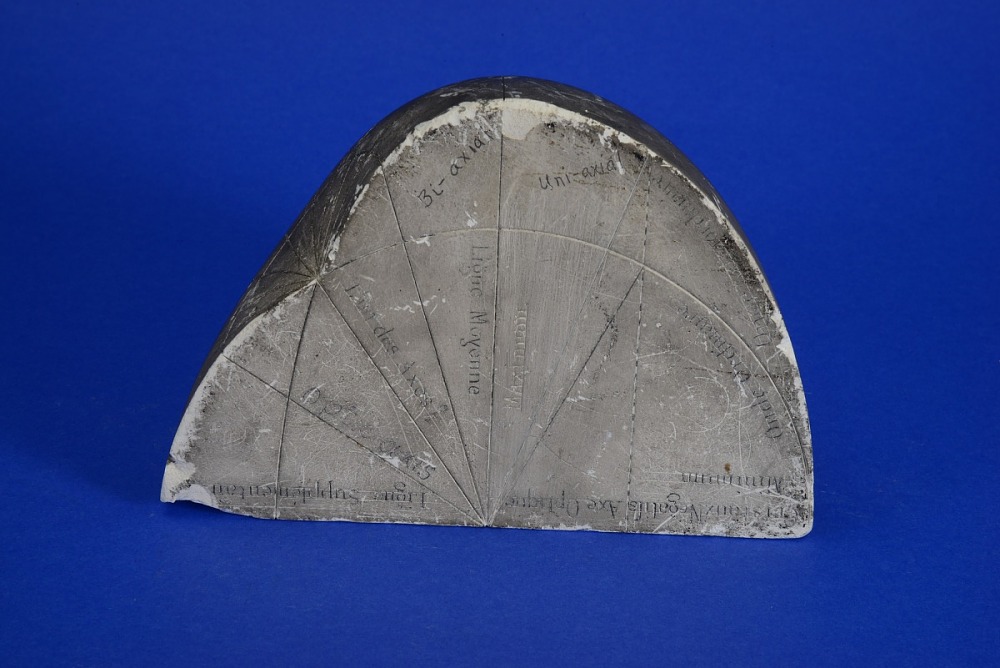 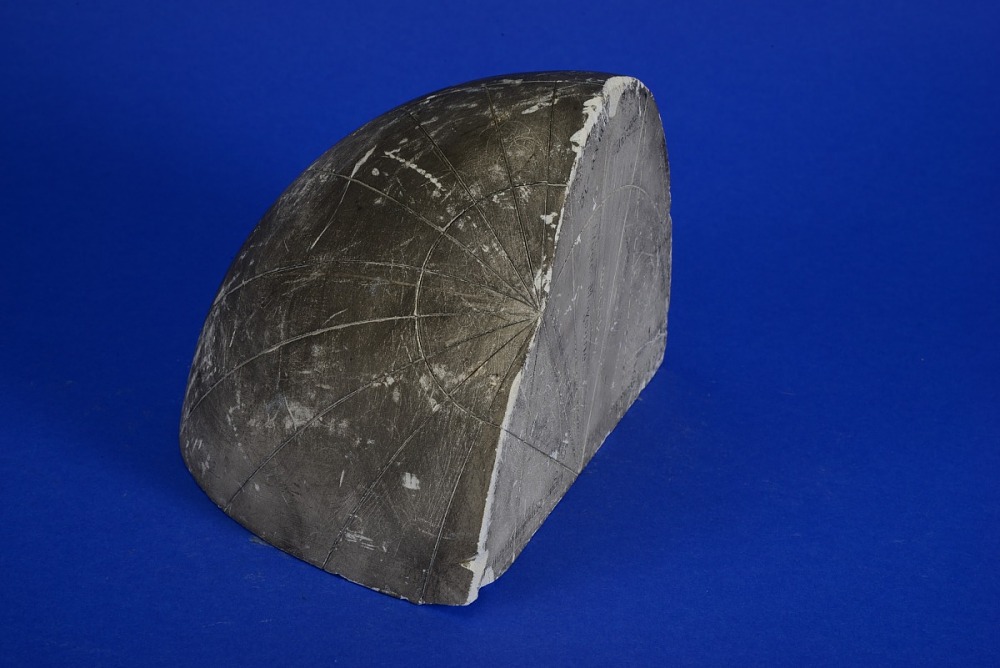 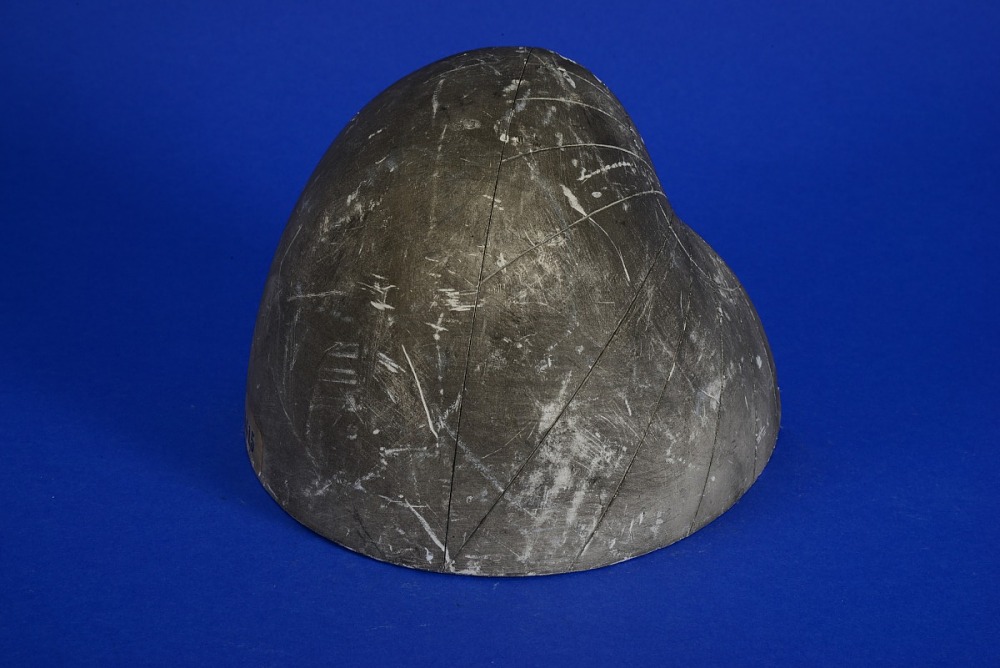 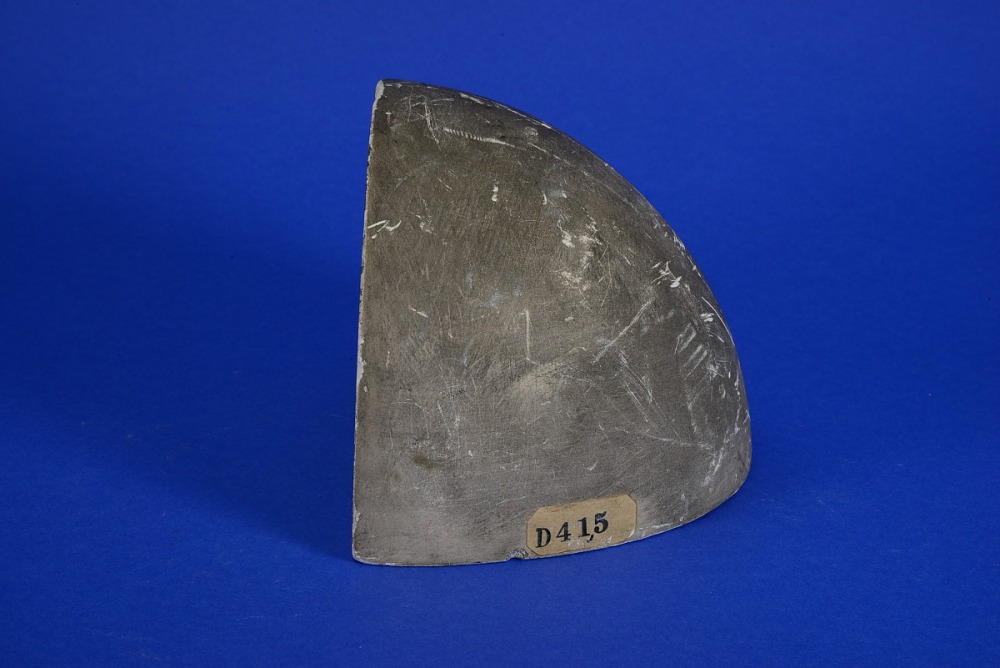 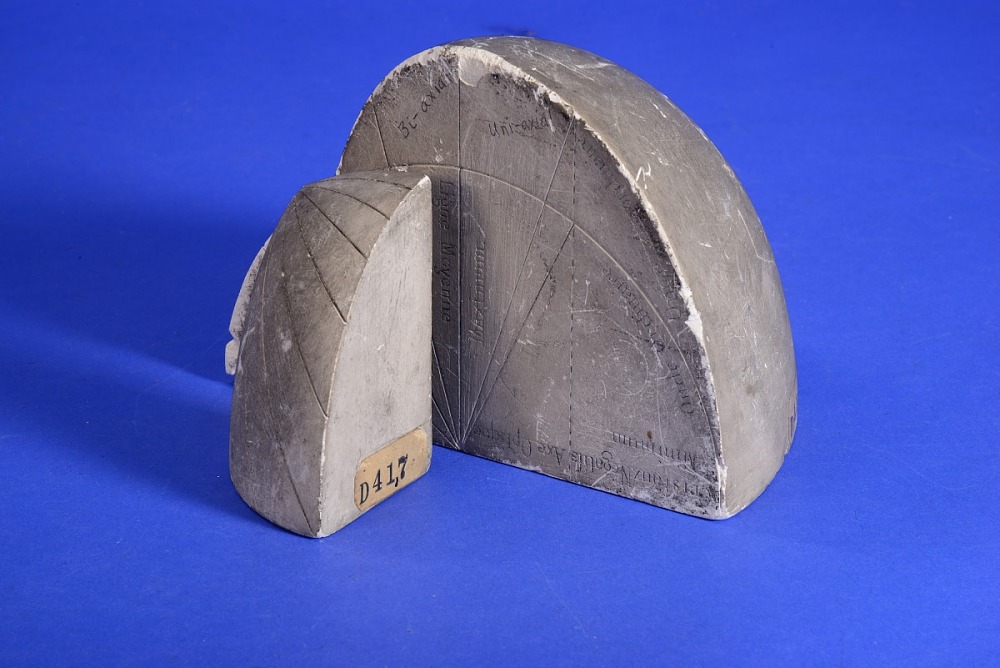 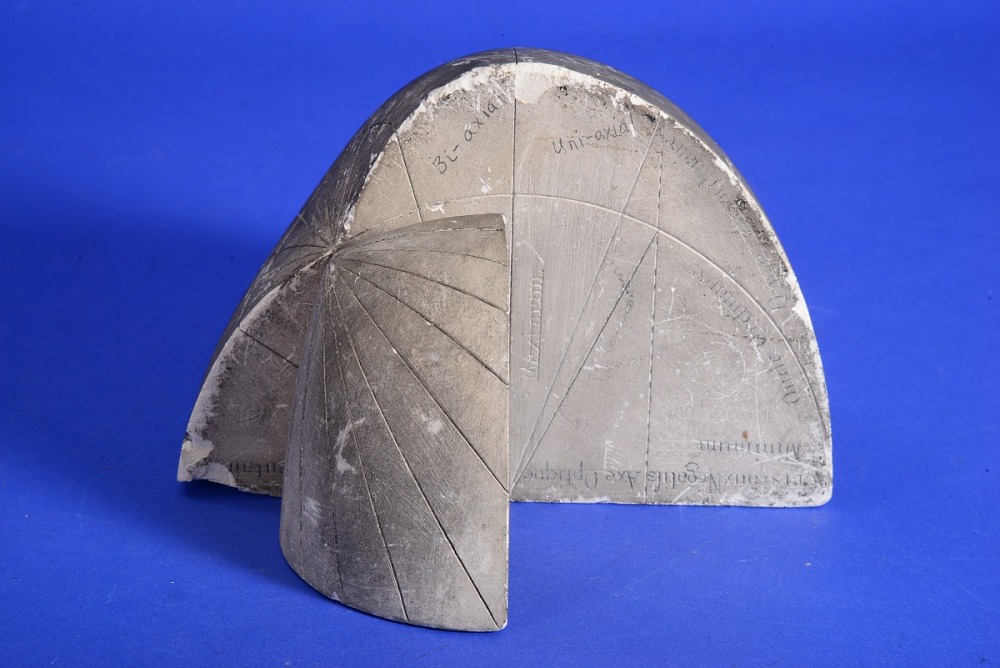 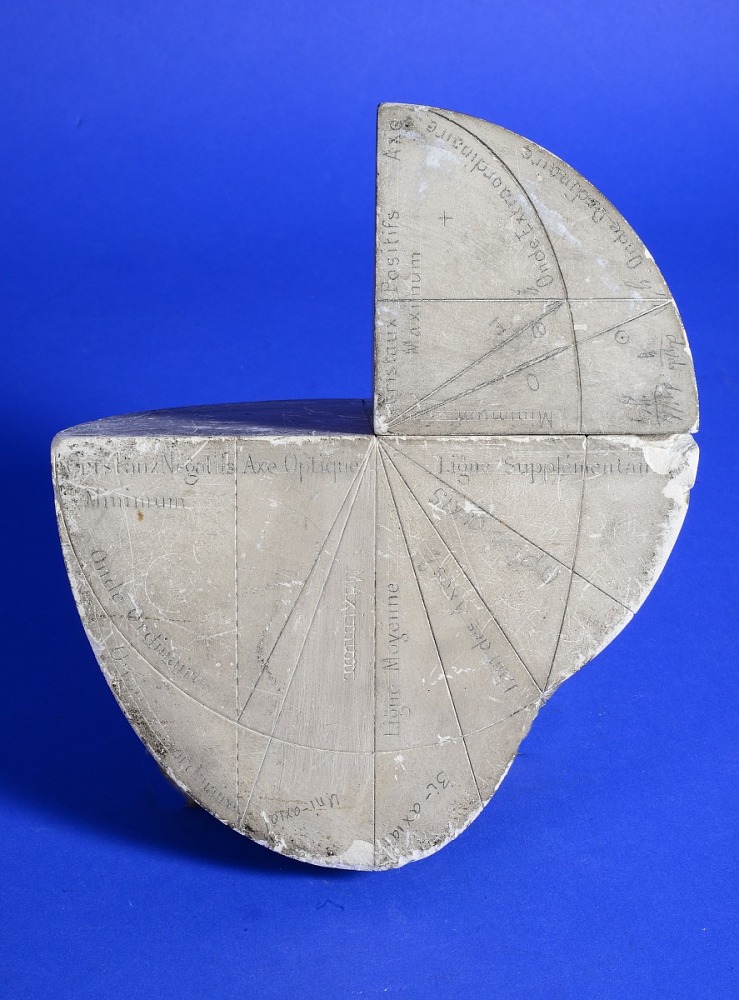 Description
This plaster model was most likely constructed in the second half of the nineteenth century in France. It is one of a set of three models (1982.0795.20, 1982.0795.22, and 1982.0795.26) representing wave surfaces of light in crystals that were probably used to teach students of optics about “double refraction,” also called “birefringence.” The wave surfaces represented by these models show the set of points that light will reach in a fixed time after emanating from a single point in a crystal. Since the speed that light travels through a crystal depends on the direction in which the light is travelling and for most directions there are two values of that speed, each wave surface has an inner and outer shell. Shells of wave surfaces that meet at four points are associated with bi-axial crystals and while those that meet at two points are associated with positive and negative uni-axial crystals. The inner and outer sheets for uni-axial crystals are a sphere and an ellipsoid with the sphere being the inner sheet when the crystal is negative.
While the maker of this set of three models is not known, they resemble a set of four plaster models of octants of wave surfaces sold by Parisian optician J. G. Hofmann c. 1860. Hofmann’s models include the outer shells of both types of wave surfaces for uni-axial crystals and the inner and outer shells of the wave surface for the same bi-axial crystal. The three models of outer surfaces indicate the location of the inner shells using portions of ellipses and circles on the faces of the octants. This model combines Hofmann’s model of the outer shell for a bi-axial crystal (left quadrant) with his model for the negative uni-axial crystal (right quadrant). Although the faces where the two Hofmann models meet are quadrants of the same ellipse, the curves on those faces do not match as one is a quarter circle and the other is a quadrant of an ellipse.
The correlation between this model and two of Hofmann’s models is based on the shape of the models and the lines and curves that appear on one face of the model (see AHB2016q012322.jpg) as compared with photographs of the Hofmann models from the Yale Peabody Museum of Natural History, “Plaster surface model illustrating polarization in birefringent crystal” (YPM HST.051252.D on the left and YPM HST.051252.C on the right), and a slide show displaying six Hofmann models from the Teylers Museum in Haarlem, the Netherlands, “Models of wave fronts of light in birefringent crystals.”
Both this model and model 1982.0795.26 have printed inscriptions in French. This model also has handwritten inscriptions in English. Since the model was donated by an American university, the English writing may have been added after the model was purchased. The inscriptions on the Hofmann models differ somewhat from those on this model. For example, inscriptions that are not on the this model but are on the Peabody Museum version of the uni-axial half of this model include “Sphère” and “Ellipsoïde” following “Onde ordinaire” and “Onde extraordinaire” (ordinary wave and extraordinary wave), respectively.
Both the Peabody Museum and the Teylers Museum versions of the Hofmann models corresponding to the bi-axial half of this model and to model 1982.0795.22 include two B’s and one C that line up to show that the model 1982.0795.22 is an octant of the inner shell of this model (see AHB2017q015513.jpg and AHB2017q015514.jpg).
Location
Currently not on view