The Japanese surrender on board the U.S.S. Missouri in Tokyo Bay on September 2, 1945

The Japanese surrender on board the U.S.S. Missouri in Tokyo Bay on September 2, 1945 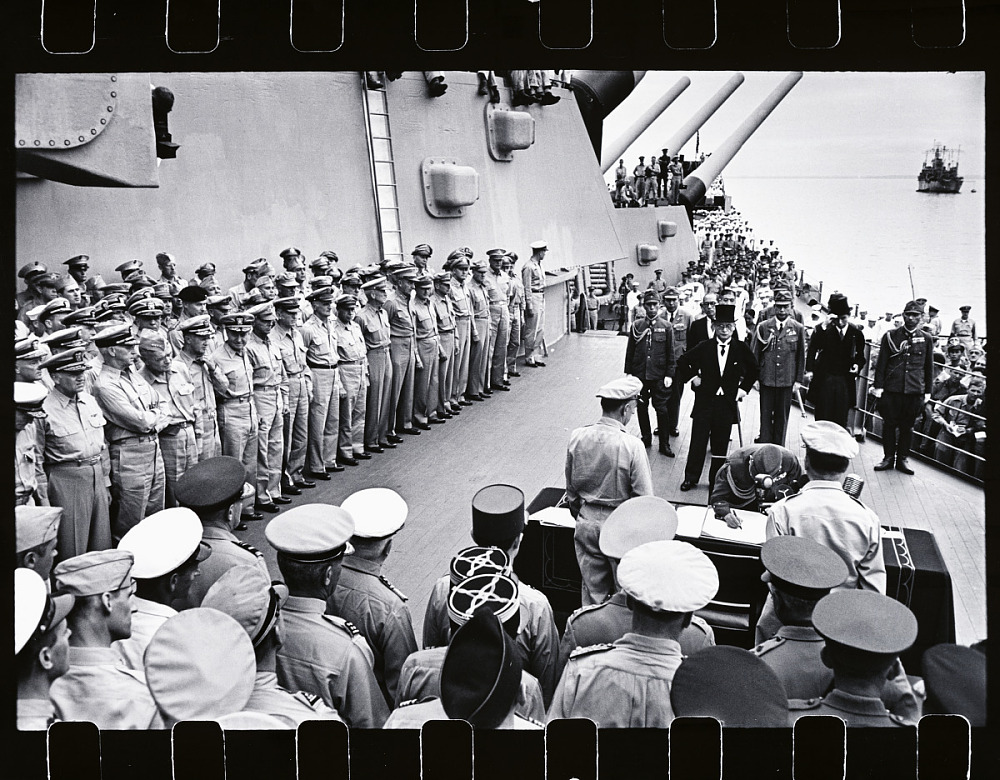 Description
Early Sunday morning on September 2, 1945, aboard the new 45,000-ton battleship U.S.S. Missouri and before representatives of nine Allied nations, the Japanese signed their surrender. At the ceremonies, General MacArthur stated that the Japanese and their conquerors did not meet "in a spirit of mistrust, malice or hatred but rather, it is for us, both victors and vanquished, to rise to that higher dignity which alone benefits the sacred purposes we are about to serve."
Despite these words, none of the Japanese delegates were saluted by any of the high-ranking officers. Gen. Carl A. Spaatz later revealed that U.S. planes had been ready with bombs to halt any last-minute treacherous act on the part of the Japanese. Seeing a deckful of high Allied officers on the U.S.S. Missouri might have presented a tempting target for a final suicide attack.
In this image, Mydans captured Gen. Yoshijiro Umezu, Chief of the Army General Staff, signing the Instrument of Surrender on behalf of the Japanese Imperial General Headquarters. Watching from across the table are Lt. Gen. Richard K. Sutherland and Gen. Douglas MacArthur. Representatives of the Allied Powers stand behind General MacArthur.
When asked how he attained such a good shooting position at the surrender, Mydans answered that "being in combat, knowing the generals, covering the war over a long time helped a lot." The first outfit to head out of Okinawa was the 11th Airborne, commanded by Gen. Joe Swing. Since Mydans had been alongside Swing during some of the fighting, he was lucky enough to be chosen by the general to get on that first plane.
Location
Currently not on view

reply
If at all possible could you please tell me the name of the Ship on the right in the background??

reply
My dad, Robert R. Harrison, was on a ship that passed near the fantail of the USS MIssouri as the surrender documents were being signed. He recalls looking up and seeing MacArthur as well. He was to have been the 8th Cavalry's choice for MacArthur's honor guard but had to decline due to malaria. H is 97 years old now and lives in Muscatine, Iowa.

reply
My dad Albert j Steckel seaman 1st class shot the 16 inch guns,and was on the Missouri on 9/2/45.My father was directly above Emperor Hirohito during the signing of the surrender document.After the war he worked in a steel mill and then served 23 years as a police officer.My father operated the 5A which served as a police vehicle and ambulance, since at that time paramedics were not in existence My father delivered 39 babies during his 23 years of police service as well as numerous citations for bravery beyond the call of duty.My father was truly an American hero. I am sad to say his career was shortened ,when he dies of lung cancer on September 7th 1973 at the age of 57

reply
My dad, Robert E. McGranaghan, from the USS Nicholas, was on the USS Missouri at the signing of the treaty with Japan. He is now 94 and will be flying to Hawaii for the ceremonies of the 75th anniversary of the signing of that treaty. His 13 children are very proud of him.

reply
Although he wasn’t aboard Missouri for the signing, my late father , Alexander Creswick, was aboard the Royal Australian Navy’s HMAS Hobart when the signing took place. He later was involved in security duties for Australian diplomats in Tokyo. He would have been 98 this year.

reply
My father served in the RN who were Co opted to the American Fifth fleet as they island hopped from Australia to Japan. He was his ship’s representative on board Missouri that day. All ships in the flotilla had one crew member selected by ballot to attend.

reply
Why is it so hard to find a list of names of all those aboard the USS Missouri at the day signing? Some have said 1100 cards or just officers, but where were the other normal 1000 sailors on board typically listed or were they moved off? I recall my wifes grandfather with card and surrender photo hanging who served on the Missouri in the USN. Finding ANY records of all the sailors seems impossible and I can't find this anywhere. others have asked but it goes unanswered.

reply
I have been searching for a list, I have a photo album from the driver of a General that was there, I have a document that he left in the back seat of the car after, and lots of photos of the big generals before the signing getting ready and standing around LOL, also have his order with the list of all the Generals under Macarthur and there drivers and cars, lots of cool pics of the cars too

reply
Jamie, I've wondered the same thing. My grandfather, Justus R Armstrong was a communications officer sunder Spruance and was on the USS Missouri and I can't find anything about him or his job. I've found one photo of him on the ship.

reply
I recently came across a letter from my grandfather ( Charles brooks) who was on board for the surrender. It was written to my grandmother celebrating the end of the war. It mentioned a man with a prosthetic leg, 2 men who were pows in Japan and the Duke of York. I would also like a list of who were there

reply
My dad was on the USS Major (DE 796) at the time of Japan’s surrender. It was the second or third ship from the USS Missouri. We still have the letter he wrote to my grandmother where he mentioned the sun came out at the time of surrender.

reply
Yup, I was on board during signing and given a card with Japanese flag background with my name and somehow it disappeared over time and I think mostly it was stolen from me. And I was first loader on quad 14 barrel #3 and Mr Caron was my gun captain and he was from Sanford Maine. First loader was the most important position on the most important anti aircraft gun as they knocked out more Kamikazis than all other anti aircraft guns put together. The instructions of operation should be preserved for demonstrations !!!!

reply
I seem to remember my Uncle telling us that he was on The Missouri during the signing of the treaty. His name was Richard Kindness.

reply
My father, who served in the Pacific, told me he was brought on board the U.S.S. Missouri for the formal surrender in Tokyo because MacArthur wanted the height of the Americans to contrast as starkly as possible with the height of the Japanese. Is that true? Were tall men specially selected?

reply
My dad said the same thing! He told me he was on board for the signing of the treaty. Stated specifically they picked the tallest for intimidation. But he had fought the Japanese in Palau, Peleliu island, 1st Marine division and was one of 35 men in that division who left the island walking. He passed away in June at 93 and I miss him! He never talked about his time in WWll until he turned 90. What a wonderful dad he was and always a hero to me.

reply
Height and MacArthur: possibly. He did it at the surrender in Manila: ordered tallest soldiers to be there to guard Japanese General when he arrived for surrender ceremony. All the American soldiers were very tall ...

reply
My father as US Navy officer serving in the Pacific was "invited" to be aboard the Missouri for the surrender September 2, 1945-- so the family story goes. Is there any way to verify who, specifically my father, was aboard the Missouri on that day?

reply
Only those present as sailors received an attendance certificate card. My grandfather was present and received a card. The reason for the card was to prove who was actually present. As many "stories" were passed down they were there. When actually only about 1100 were present. If someone does not have the card, they most likely were not present for the signing.

reply
My father was present but was not an officer. The ordinary sailors like the cooks did not get a card.

reply
My father, Signalman First Class Raymond G. Hensel, was stationed on Guam. The night before the USS Missouri left for the signing of the peace treaty in Tokyo Harbor, he looked down from the tower onto the dock, and below him stood three five stars! Nimitz, Halsey, and MacArthur. My father, 21 at the time, scrambled down and asked if they needed anything. They replied they were waiting for the tender to take them on board the Missouri. It is a moment he will never forget. He is now 95, and living at Patriot's Landing, near Joint Base Lewis McCord, in DuPont, WA. After being released from the Navy and using the GI Bill at the U of Washington, he went on to join the U.S. Army as a career, and retired as a Lt. Col.

reply
My dad was on the USS Nicholas when it was alongside the USS Missouri at the signing on 9/2/45. He saw MacArthur 30’ away and was much impressed! He will be 94 this November. Still has his memories! Robert E. McGranaghan is his name. Last of 3 living Nicholas survivors.

reply
Congrats. You must be proud. Thank you for sharing.

reply
I have been trying to look up the position where USS Missouri was anchored for the surrender of Japan. Surprisingly, the latitude and longitude i s not mentioned. I have seen it in some memorials but have been unable to find it on line.

reply
From Adm Murray's account at the Surrender Ceremony: "This was the spot we had anchored in there in Tokyo Bay, Off Yokosuka. The same spot we’d originally anchored, where Perry had been in 1853".

reply
The latitude and longitude are actually on the plaque on the deck of the Missouri.

reply
Where can I find a list of the names of the officers and American personnel in the picture? Thank you!

reply
Are any of the officers on deck U.S. Marines?

reply
The officer standing between Admiral John McCain and Admiral William Halsey is Marine Colonel Gerald Friedman, a staff officer of Admiral Halsey's. He was 21 or 22 years old at that time.

reply
Yes, some of them are marines. My great uncle, Robert Rinearson, was there and he was in HQ company of the 1st Marine Raider Battalion.

reply
"This moment is represented across the America: With this photo in Washington, DC, the Missouri itself at its final mooring place in Pearl Harbor, Hawaii, and the original commemorative medallion imbedded in the deck where the surrender signing took place is located in the Missouri state capitol in Jefferson City."