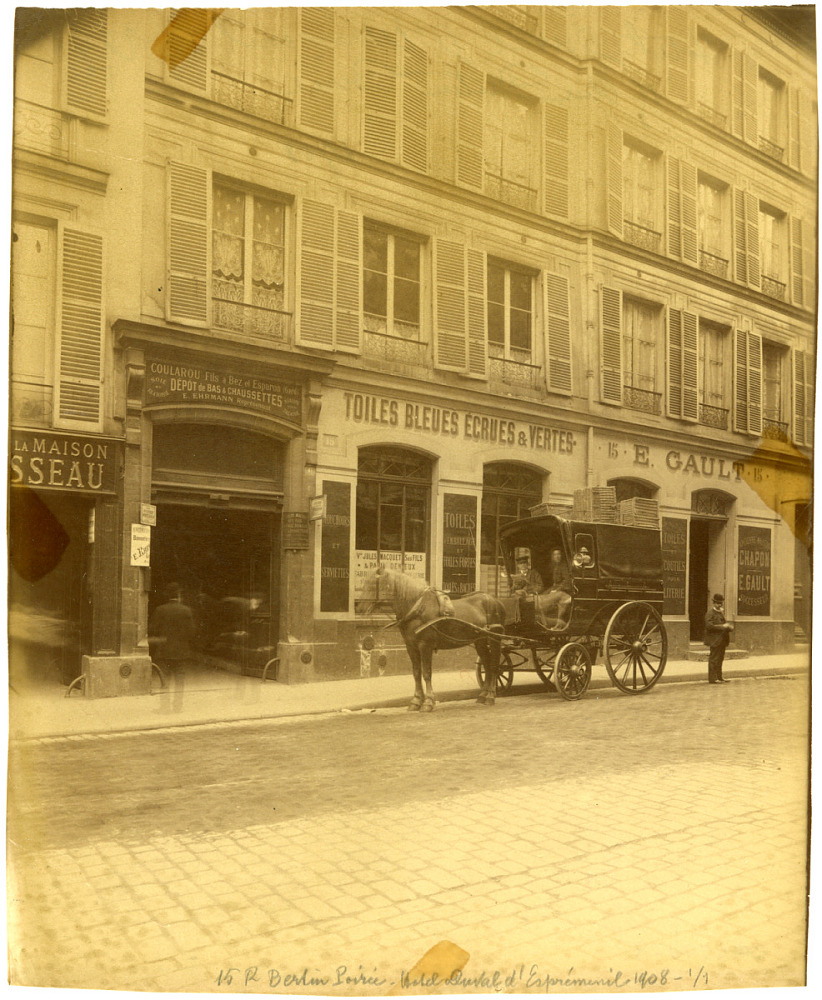 Description (Brief)
Unmounted silver albumen photograph by Eugène Atget, "Hotel Duval d'Espremenil, 15 rue Bertin Poiree, 1908." Four story building with shutters on all windows above ground-level store selling fabrics and linens - "Toiles Bleues, Écrues, & Vertes" is the primary name of the store; "15" is written to either side of the name "E. Gault, who is listed as the "successeur." Horse-drawn carriage at front with single horse and two men seated in the carriage. Blurred figures stand in front of entrance to "Dépôt de Bas & Chaussettes," for which "E. Ehrmann" is listed as the "representant." (salesman). Front: 15 R Bertin Poirée, Hotel Duval d'Esprémenil 1908 - 1/7. Verso: Hotel Duval d'Esprémenil, 15 rue Bertin Poirée; 1908 beneath, 290 in upper right corner.
Description
Le Pére Atget, as Man Ray fondly called him, was born in Libourne, France in 1857. As a young man, he was drawn not to photography, but to the stage. Although he was drafted into the army in 1878 and remained on active duty for several years, Atget began studying at the National Conservatory of Music and Drama in 1879. By 1881, however, his teachers decided he could not handle the joint responsibilities of acting and military duty, and did not ask him to return the following year. Despite his dismissal, Atget went on to perform in small productions for the next ten years. However, by the time he was forty, he had realized that he was not going to succeed as an actor. After an initial attempt at painting and a few years of photographic experimentation, Atget finally settled into a Parisian apartment on Rue Campagne Premiere between 1890 and 1891 and hung a small painted shingle above his door that would define his work for later generations: “Documents pour artistes.”
While Atget is considered to be one of the great early photographers, his work was by no means considered groundbreaking at the time. The first push to document historical architecture in France, and especially Paris, began in the 1850s when the Commission des Monuments Historique was formed to photograph the city. Among the photographers appointed by the commission were Henri Le Secq, who photographed Chartes Cathedral and Reims, Edouard Baldus, and Charles Nègre (COLL.PHOTOS.000054). Atget began his work during a second push around the turn of the century, and was greatly facilitated by technological advances in the mid-1890s that made it easier to photograph for professionals and amateurs alike. What distinguished Atget from his contemporaries was his decision not to work for an institution, where his photographs would be on public record, but to instead carve his own niche in the market as a freelance photographer.
As a result, in addition to any commissions he received from clients, Atget had the opportunity to seek out subjects that were of personal and professional interest, such as the trees that figure so frequently in collections of his work. Between 1898 and 1927 Atget systematically photographed streets, monuments, historic buildings and dwellings both in Paris and in the outlying areas. His meticulously categorized work was arranged in albums, and he recorded in detail his client’s preferences for different subjects so that he would be prepared when he met with them. To his credit, Atget’s body of work remains perhaps the best pictorial record available of Paris in the first quarter of the twentieth century.
By 1920, when most photographers had switched to smaller and technically superior cameras, Atget continued to use the same 18x24 view camera he had been using since 1888. Professionally, he was isolated as he did not enjoy the company of a group of peers with whom he could discuss his work. The first publication of his photographs was in “La Revolution Surrealiste” in 1925. Though Atget had been well-known in his business since 1901, this was the first time his work had been identified as artistic rather than merely documentary. Atget himself refused to have his name included in the magazine, and by implication in the movement, explaining that he was simply a purveyor of documents that could be used by other artists. While his work belies this statement, he continued to disassociate himself from Surrealism until his death in 1927.
Both a businessman and artist, Atget sold his work to artists, historians and even institutions such as the Bibliotheque Nationale during his lifetime. In 1920 the Service Photographique des Monuments Historiques purchased just over 2600 of Atget’s negatives. The remainder of the negatives, as well as any prints that remained following his death, went to his good friend Andre Calmette. Shortly thereafter, Berenice Abbott (COLL.PHOTOS.000017), a young American photographer, persuaded Calmette to sell her the collection so that she could properly introduce it to the world. She and American photographer Walker Evans (COLL.PHOTOS.000024) are testaments to the style and rigor that characterized Atget’s work, and both followed his tradition of documenting the urban landscape and its details.
The Eugène Atget collection consists of fourteen silver albumen prints made between 1907 and 1908. On the back of each print the title and dates are handwritten by the artist. On a few, a number is etched in the negative. All of the photographs present different scenes in Paris, France. Most are architectural in subject matter, but some do include individuals as well. Each print is approximately 7 x 8.5 inches and is not mounted.