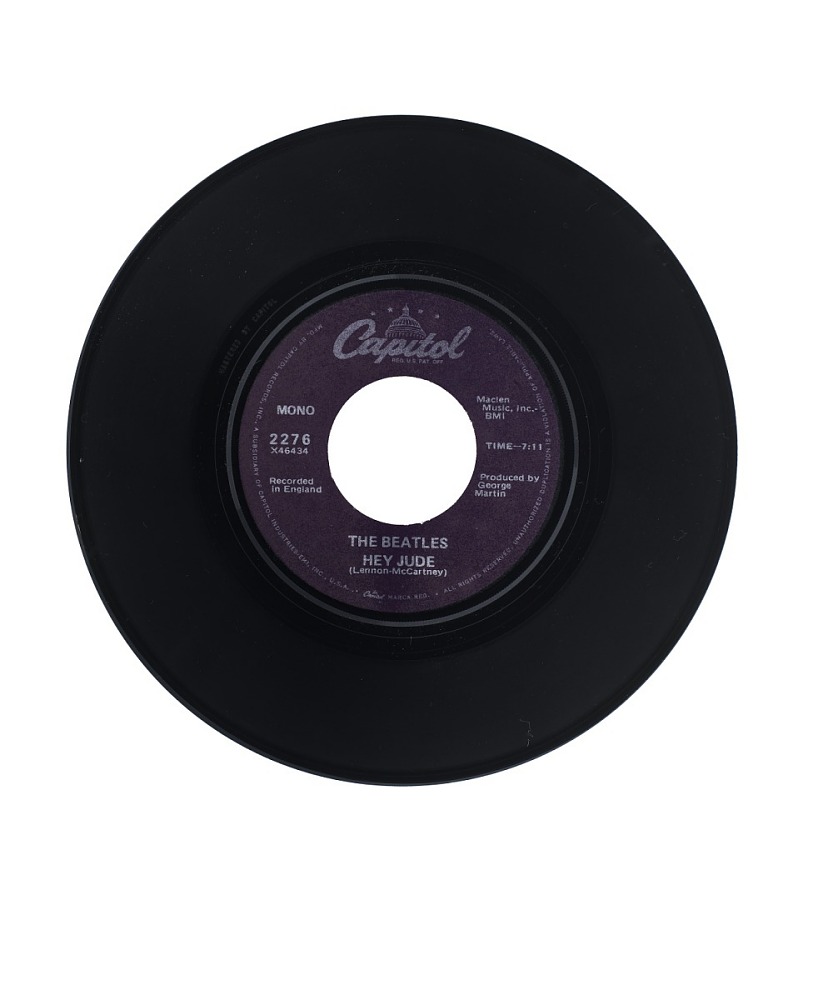 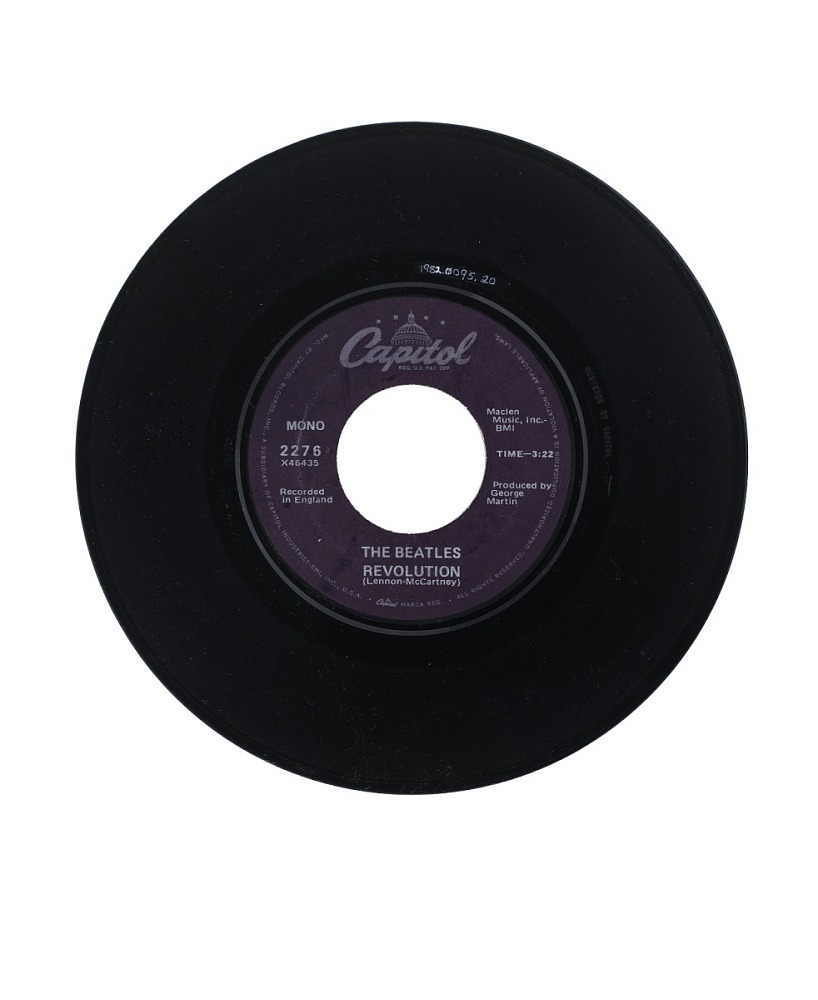 Description
This is the 45 rpm 7 inch vinyl single containing the Beatle’s song “Hey Jude” and the B-side “Revolution.” Originally released in August of 1968 on the Beatle’s Apple Records label, “Hey Jude” was over 7 minutes long, the longest single ever to hit number 1 in the United States. Technical limitation of records used to limit singles length to 3 minutes, but Bob Dylan’s six minute long “Like a Rolling Stone” changed this convention and extended the single format on both vinyl and radio. This record is the Capitol Records rerelease from 1978 with catalog number 2276 and matrix number X46434.
Location
Currently not on view (sleeve)

reply
A 45 RPM, microgroove, 7" phonograph record CAN contain more than 7 minutes and 11 seconds of music. The maximum length of time that any record format can reasonably contain depends upon the dynamic range of the music, e.g. a quiet classical piece, Debussy's "Clair de' Lune" would be able to extend the maximum possible time limit as the modulation is generally much less than on a pop record like "Hey Jude". Modern lathing heads have long been driven by a type of analogue computer that looks ahead on the master tape and charts the modulation levels in units of physical revolutions of the phonograph disc. This is not as easy at its sounds for late 1950's technology, but it worked splendidly. I believe Scullay developed this technology along with the great feed-back lathe that greatly improved bass response. Master tapes have traditionally moved at 15 inches/second (ips) & occasionally at 30 ips. The analogue computer is able to search ahead on the master tape and determine the level and location of the upcoming modulation (or velocity'), —relative to the physical disc. E.g., if the cutting head knows that the modulation coming up over the next two, or more disc revolution will be low; then the lathing apparatus can move the next two (or more) revolutions of physical grooves closer together, thus allowing for more recorded time on the record. This is called, variable groove spacing and all records have employed this technique since the middle 1950s. Alas, this is why it is impossible to give an exact figure for the maximum possible time permitted on any phonograph format. In addition, the 45 RPM allows for slight, but useful variation in the groove size. The standard size (circa 1950s- 1960s) being about 1.0 mil, which is a little larger than the microgroove size on a 33-1/3 RPM. When stereo 45 RPM records were made, a .07 mil cutting head stylus was generally used, along with a better grade of vinyl (more vinyl to plastic ratio). Such records naturally allowed more music. The standard "microgroove playback stylus began at 1.0 mil and gradually was reduced to .07 mil (width); —some stylus are elliptical, e.g. .07 x .04 mil. The elliptical shape allows more accurate reproduction of higher frequencies and more complex groove configurations. In addition, stereo grooves move the stylus in three dimensions, and an elliptical stylus often proves better than a conical stylus when tracking more complex groove modulations. "Hey Jude" timed at 7:11, and for a high energy modulated record, that IS about the maximum time allowed; however, an extra 10 to 20 seconds (at least) could be made available if the run-out and/or start grooves were was made thinner. In addition, if the over-all maximum modulation was lowered 10%, it would allow significantly more music. This was often done in the early days of RCA 45 RPMs and I have seen early 45 RPMs with more than 8 minutes of music. The lathing technology was amazing if one considers that it all had to be done without ADCs, laser sensors or digital logic. Stereo was publically introduced in 1958 because that is when the first reasonably inexpensive stereo cartridges became available. I believe the first significant commercial stereo cartridge was the General Electric VR 1000. Shure and Fairchild also made some early stereo cartridges that proved worthy. Variable Reluctance is a variation of the "moving iron" cartridge design that still sounds quite good. (E.g., Grado is a similar design). To this day, I often use assorted GE VR mono cartridges for restoration transfers of shellac, lacquer and acetate 78 RPM parts. PS: An easy way to visualise how stereo grooves work is to imagine one channel being recorded on the inner groove wall and the other channel on the outer groove wall. Of course, the nimble minded will quickly realise that the stylus is moving in THREE dimensions under this scenerio, and this makes a lot of sense. After all, two eyes give you stereoscopic vision. and two ears give you stereo sound. Hence, the early advertisements of "Three dimensional sound". The 45 RPM speed affords significantly higher bandwidth and much improved signal to noise over the 33-1/3 RPM speed. If you listen to a vinyl 12" recorded at 45 RPM (& well mastered) this will become wonderfully obvious. —E.g. Elvis Costello's 12" vinyl E.P. "Every Day I write the Book". Alas, at best, a 33-1/3 rpm vinyl record can deliver no more than about 27 - 30 db signal to noise ratio (22-23 db is average), and no more than about 24 - 25 db of stereo separation at 1000 Hertz (with only the finest playback gear). —E.g. Thorens TD124 or Technics SL10 using a Shure V-15MR VI, or several more expensive MC cartridges. Yet, any modern CD will allow a S/N reproduction rating of over 100 db and a stereo separation spec of at least the same! —Not to mention a wow and flutter spec of ZERO. Hmm.