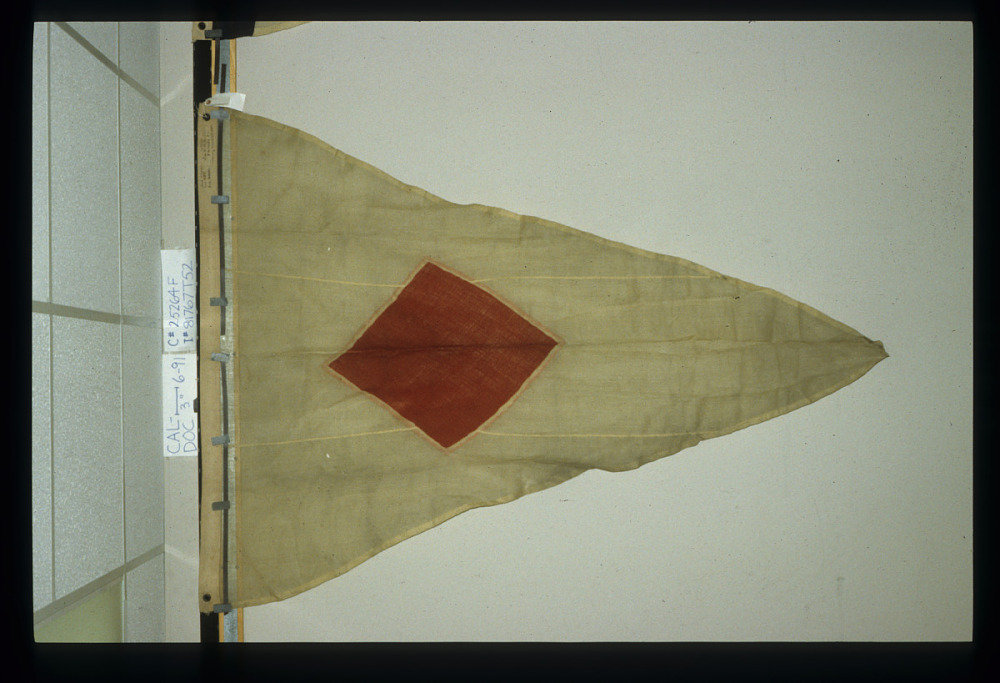 Description
Physical Description:
Wool bunting pennant flag. White field with a large red diamond in the center of the flag. The white cotton hoist is machine-stitched and has a metal grommet at each end. Flag has hand-stitched seams. Inscription on hoist reads "3rd Corps/1st DIV/1st BRIG From/Wm. F. Scheible/Philada. Pa./Contract March 23, 1865".
General Description:
Third Army Corps (26 June - 12 September 1862)
The diamond shaped lozange, a symbol adopted by the Third Army Corps under General Philip Kearny, became the ensign for the corps flags. The use of corps badges today may be traced to a spontaneous beginning with a directive from General Kearny. According to legend, General Kearny mistakenly reprimanded a group of soldiers from a corps other than his own while on march. To eliminate future confusion, he issued diamond shaped badges of cloth, known as "Kearny Patches," to be worn on the crown pieces of the caps of the soldiers.
The necessity of identifying corps, division, and brigades on the battlefield soon led to a requirement that all corps in the Union Army be represented with a designating badge. Often the badges were used on the corps equipment and flags. For many corps, the badge introduced an ensign that served thereafter as an enduring symbol in its heraldic lineage. Although the original Third Army Corps flags probably carried the "white cross botonny with red 'three' found in other Army of the Potomac Corps,:" (Todd p. 323), shown here is the regulation diamond shape used after 1864. Flags of the third Army Corps were carried in all the battles of the Army of the Potomac except Antietam (Boatner, p. 189).
Location
Currently not on view