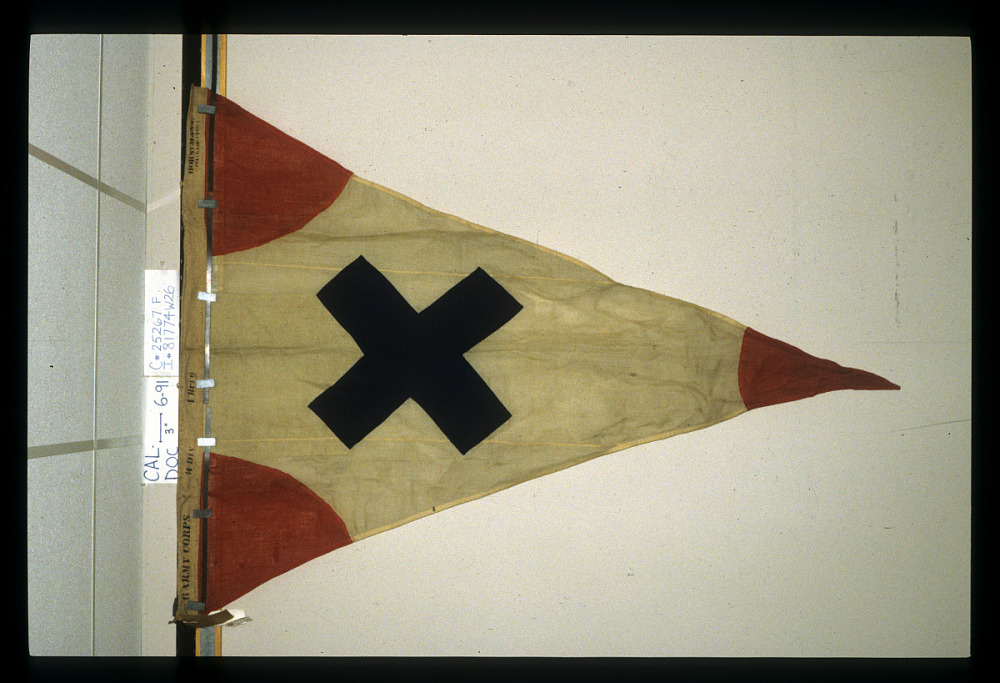 Description
Physical Description:
Wool bunting pennant flag. White field with a large blue St. Andrew's cross in the center of the flag. Red triangles form the corners of the flag; the edges of the triangles facing the center of the flag are convex. White hoist (yellowed) with no grommets. Inscription on hoist reads "6 ARMY CORPS 3 Div 4 Brig HORSTMANN/PHILADELPHIA".
General Description:
Sixth Army Corps (18 May 1862 - 28 June 1865)
Originally the Greek cross was the corps emblem for the Sixth Army Corps. Early in 1864, the cross was shifted 45 degrees to create the St. Andrews cross in 1864 that was used until the end of the war.
Known as "The Fighting Sixth" and "the most famous corps in the Civil War", the Sixth Army Corps was created on 18 May 1862 and discontinued in June 1865. the Sixth Corps was commanded by Major General John Sedgwick, who was known as "Uncle John" to his men. General Sedgwick was killed at the battle of Spottsylvania. After the war, a member of his staff, Colonel James H. Platt, presented the headquarters flag of the Sixth Army Corps to the Association of Vermont Officers with the following letter:
"This flag should be especially dear and sacred to the old Vermont brigade, as it is the only one that our beloved Sedgwick ever used while he commanded the immortal 6th Corps. It was his headquarters battle flag. Always carried near his person in every action in which he commanded the corps, it will be recognized by every soldier of the Old Brigade at once, and must awaken in their hearts vivid memories of the numerous fields upon which, under its folds, they achieved so much of their imperishable renown. It will recall the noble Sedgwick, who loved them so well and was so well loved in return, who was at once the brave soldier, the able commander, the sincere friend; the best soldier and the noblest man it was ever our good fortune to serve under. It will also recall our brave comrades who sealed their devotion to their country by their heroic deaths upon the field of battle under its folds. I have regarded it as a precious and sacred relic; and, believing I had no right to retain it all to myself, have long contemplated presenting it to this association. I respectfully request my old comrades, through you, to accept it a valuable addition to their store of relics; that they will permit it to grace the hall at their annual reunions, and cherish it as a memento of our beloved Sedgwick and the old Corps."
Location
Currently not on view