MAP of route pursued by U.S. Troops, from Fort Smith, Arkansas, to Santa Fe, New Mexico SOUTH SIDE OF CANADIAN RIVER, in the year 1849.

MAP / of route pursued by U.S. Troops, from Fort Smith, Arkansas, to Santa Fe, New Mexico / SOUTH SIDE OF CANADIAN RIVER, / in the year 1849. 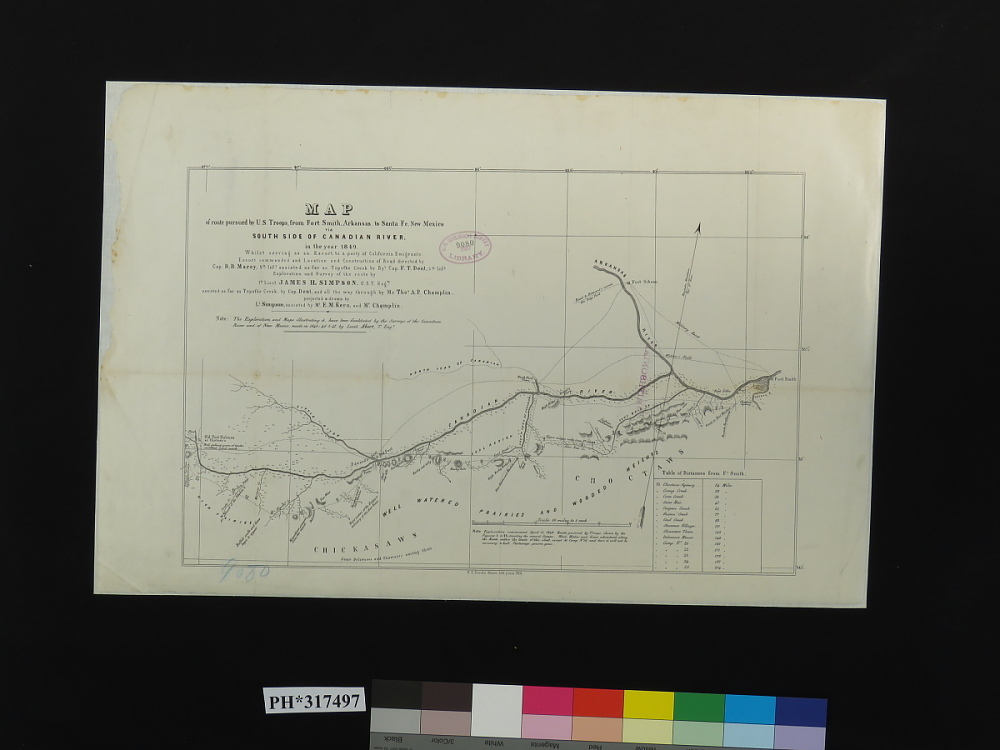 Description
In 1849, shortly after gold was discovered in California, some 3,000 immigrants traveled along the Canadian River from Fort Smith in Arkansas to Old Fort Holmes, in what is now Oklahoma. Since their route passed through the Commanche buffalo range, the immigrants were escorted by troops led by Capt. Randolph Barnes Marcy (1812-1887), a graduate of the U.S. Military Academy who spent much of his career as an Army officer in the American West.
This map extends from about 34°30' to about 36°10' north latitude, and from about 94°10' to about 97°35' longitude west of Greenwich. The scale is 10 miles to the inch. There is a table of distances from Fort Smith. The full title reads: MAP / of route pursued by U.S. Troops, from Fort Smith, Arkansas, to Santa Fe, New Mexico / SOUTH SIDE OF CANADIAN RIVER, / in the year 1849. / Whilst serving as an Escort to a part of California Emigrants. / Escort commanded and Location and Construction of Road directed by / Cap. R. B. Marcy, 5th Infy assisted as far as Topofke Creek by Byt Cap. F. T. Dent, 5th Infy / Exploration and Survey of the route by / 1st Lieut. JAMES H. SIMPSON, U.S.T. Engrs / assisted as far as Topofke Creek, by Cap. Dent, and all the way through by Mr. Thos A. P. Champlin. / projected & drawn by / Lt Simpson, assisted by Mr E. M. Kern, and Mr Champlin. The text at bottom reads “P. S. Duval’s Steam Lith press Phil.”
Ref: W. Eugene Hollon, Beyond the Cross Timbers: The Travels of Randolph B. Marcey, 1812-1887 (Norman, 1955).
Location
Currently not on view