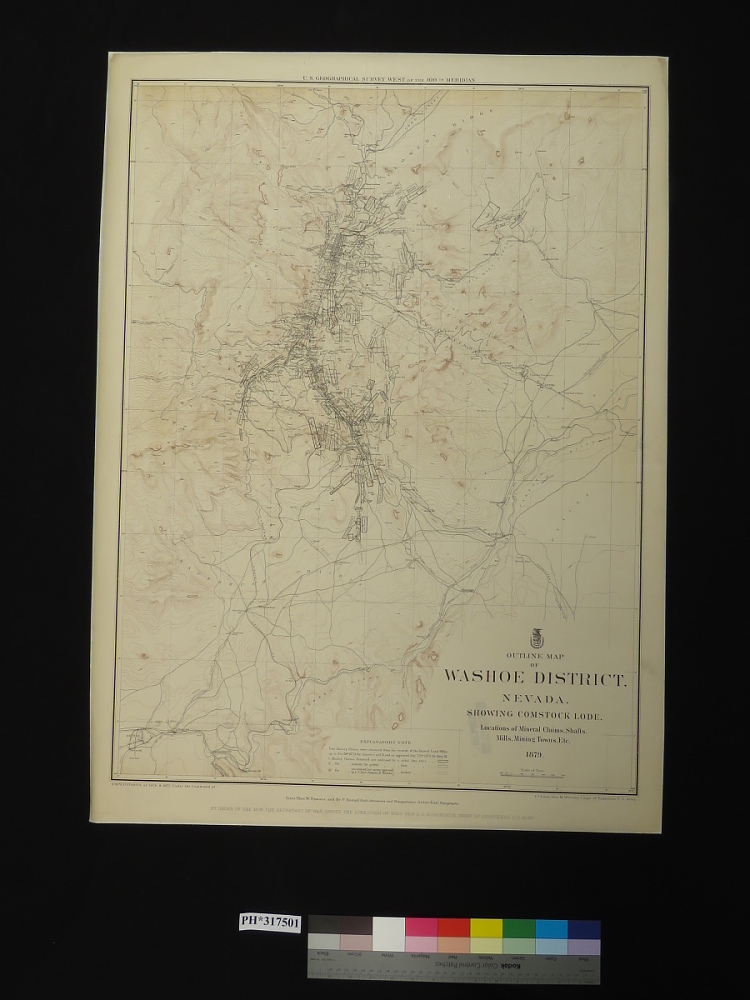 Description
This map extends from 39°10'10" to 39°21'15" latitude and from 119°32'30" to 119°43' longitude west of Greenwich. The text at top reads “U.S. GEOLOGICAL SURVEY WEST OF THE 100TH MERIDIAN.” The texts at bottom read “EXPEDITIONS of 1876 & 1877, Under the Command of 1st Lieut. Geo. M. Wheeler, Corps of Engineers, U.S. Army” and “Lieut. Thos. W. Symons, and Dr. F. Kampf, Field Astronomy and Triangulation. Anton Karl, Topography, and “BY ORDER OF THE HON. THE SECRETARY OF WAR, UNDER THE DIRECTION OF BRIG. GEN. A. A. HUMPHREYS, CHIEF OF ENGINEERS, U.S. ARMY.”
The Comstock Lode of silver ore lies under the eastern slope of Mount Davidson, in the Virginia Range in Nevada. It was the first major silver lode found in the United States. After it was made public in 1859, prospectors rushed to the region. This map was made by the geological survey of the United States west of the 100th meridian authorized by Congress in 1872. Also known as the Wheeler Survey, it was led by George M. Wheeler (1842-1905), a graduate of the U.S. Military Academy and member of the Army Corps of Engineers.
Thomas William Symons (1849-1920) was a graduate of the U.S. Military Academy who, after joining the Corps of Engineers, surveyed and mapped the American Northwest. Dr. F. Kampf was a civilian astronomical assistant on the Wheeler Expedition. Anton Karl (b. 1854) was a Bavarian who, after coming to the United States in 1870, drew maps for the War Department, the General Land Office, the Geological Survey, and the Surveyor’s Office of the District of Columbia.
Ref: George M. Wheeler, “Annual Report upon the Geographical Surveys of the Territory of the United States West of the 100th Meridian,” in Annual Report of the Chief of Engineers for 1879 (Washington, D.C., 1879), opp. p. 189.
Location
Currently not on view