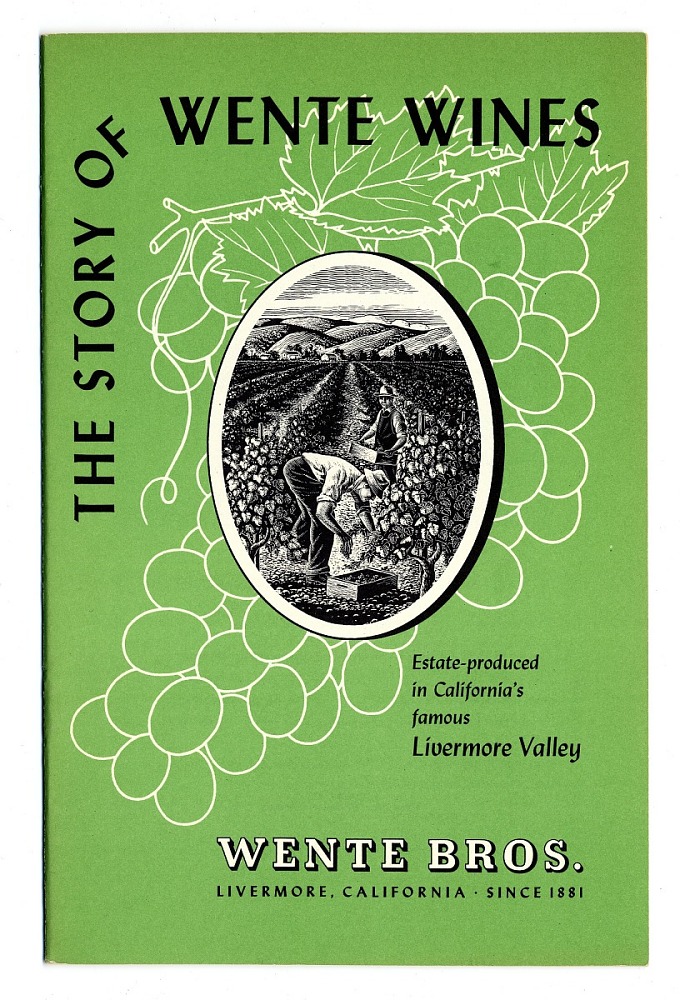 Description
This 16-page booklet, published in 1954, is a marketing brochure for the Wente Bros. winery in Livermore, California, “home of the BIG white table wines of California.” It includes a short essay on the location of the winery, the make-up and quality of the soil in the Livermore Valley, and the story of Carl H. Wente, who established the winery in 1883. The booklet includes pages describing the wines produced by the Wente Bros. and recipes for complementary dishes. The pairing of wine with recipes was an important aspect of wine education in post-Prohibition America, as trade organizations and vintners alike encouraged people to think of wine as part of a meal. A section on “Bits of Wisdom about Wine” offers advice on purchasing, serving, and enjoying wine.
The Wente family’s history in wine began in 1870, when Carl Heinrich Wente came to the United States from Hanover, Germany. He sought out prominent German winemaker, Charles Krug, and learned the basics of viticulture and winemaking in California’s Napa Valley. In 1883 he moved to Livermore, east of San Francisco, and acquired an interest in a local vineyard, soon expanding his holdings to 300 acres in cultivation. Two of his three sons learned the business: Ernest studied agriculture at the University of California, Davis, and took on responsibility for the vineyards, while Herman studied enology at Berkeley and became the family’s winemaker. In the early years of production, the Wentes specialized in white wines, selling their wine in bulk to firms in the San Francisco area.
During Prohibition, the Wentes produced altar wine in bulk for Georges de Latour of Beaulieu, in the Napa Valley. But, like most California growers, they sold most of their grapes to home winemakers. Following Repeal, in 1934, they bottled wines for the first time.
The Wente family is known for its significant work with Chardonnay, which began when Ernest Wente was a student at UC Davis. In 1912, with the help of Davis employee Leon Bonnet, Ernest persuaded his father to import cuttings from the vine nursery at the University of Montpellier in France. He also sourced budwood from the Gier Vineyard in Pleasanton, in Alameda County. Ernest planted the two sources in the Wente’s Livermore Valley vineyard and over the next three to four decades, selected vines that showed favorable traits. He re-planted them to establish what is now known as the Wente Clone of Chardonnay. In the 1940s and 1950s, the Wente clone was spread across the state to other wineries. The most famous and widely distributed of all the clones that derived from the Wente plantings, FPS 04, eventually became the most widely planted Chardonnay selection in California.
In 1960, the family expanded its holdings, buying acreage in the Salinas Valley called the Arroyo Seco Vineyard. When Herman Wente died in 1961, Ernest’s son Karl became the head of the company. After Karl’s death in 1977, the next generation—Eric, Philip, and Carolyn—assumed responsibility for the family’s enterprise.
Location
Currently not on view