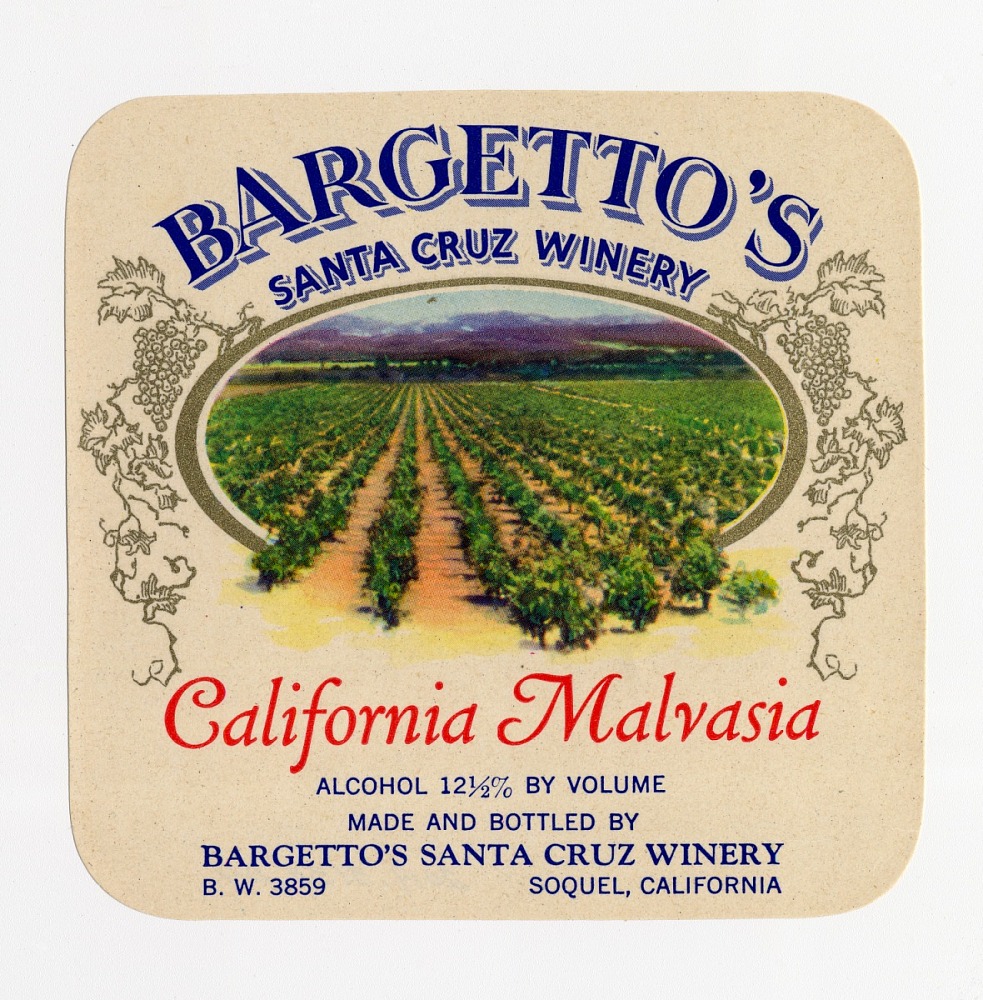 Description
Malvasia refers to a group of wine grape varieties historically grown around the Mediterranean, including the island of Madeira. Malvasia Bianca is the most widely planted white wine grape in Italy and Italian immigrants to California wine country, like the Bargetto family, would have been familiar with its versatility and character. This label from the 1940s was used on the Bargetto’s “California Malvasia,” a dry table wine made and bottled at their winery in Soquel, in the Santa Cruz area of California’s Central Coast. Malvasia continues to be grown in California, where it is primarily used in blending.
The Bargetto family’s story reflects in many ways the history of Italians in California, with several themes threaded throughout: multiple migrations between Italy and America, opportunity and work in the wine industry, and the importance of family and community. The first Bargettos to arrive in California were Giuseppe (Joseph) and his eldest son Filippo (Philip), who left their ancestral home in Italy’s Piedmont region, in 1890. They settled among other Italians in the winegrowing area around Mountain View, in the Santa Cruz Mountains, where they found work at the Casa Delmas Winery. Although Joseph moved back to Italy two years later, Philip remained until 1902, when he returned to Italy to be married. Three years later Philip and his new family arrived back in California, settling first in San Francisco, then, with remarkable prescience, to Mountain View just before the devastating earthquake and fire in 1906.
In 1909, back in San Francisco, the Bargettos opened their first family winery on Montgomery Avenue. Philip’s uncle Giovanni (John) arrived from Italy and, with a third partner, Alberto Colombo, they formed the South Montebello Vineyard and Wine Co., where they fermented, aged, and delivered barrels of wine to local restaurants. The next member of the family to arrive from Italy was Philip’s younger brother, also named Giovanni (John P.), who went to work in a San Francisco restaurant. After two years and suffering from exhaustion, he moved to the Santa Cruz Mountains, where he was joined by his sisters Angelina and Maddalena, both of whom married Italian immigrants. The growing Bargetto family became part of an expanding community of Italian Americans in the town of Soquel.
As Prohibition loomed, the Bargettos closed the San Francisco winery and moved to Soquel in 1917, where they purchased the site of what became the family’s winery after Repeal. Here they began making wine for home use by family and friends. To keep themselves financially afloat during Prohibition’s dry years, the family peddled vegetables and also served meals out of their home on weekends. Customers who wanted a glass of wine with their meal, a longstanding Italian tradition, were served wine from barrels stored in the cellar.
After Prohibition was repealed in 1933, the Bargettos applied for federal bonding, and officially became Bonded Winery 3859. The two brothers, Philip and John P., ran the winery together until Philip’s death in 1936; through the 1940s and 1950s, John P. held the company together with help from his sons Ralph and Lawrence, who took the lead in the 1970s and 1980s.
The winery was still family-owned in 2014, when artifacts associated with the early years of the Bargetto family’s winery were donated to the museum. The donor, John E. Bargetto, with his brother and sister, are the third generation of Bargettos to operate the family’s wine business in the Central Coast region of California.
Location
Currently not on view