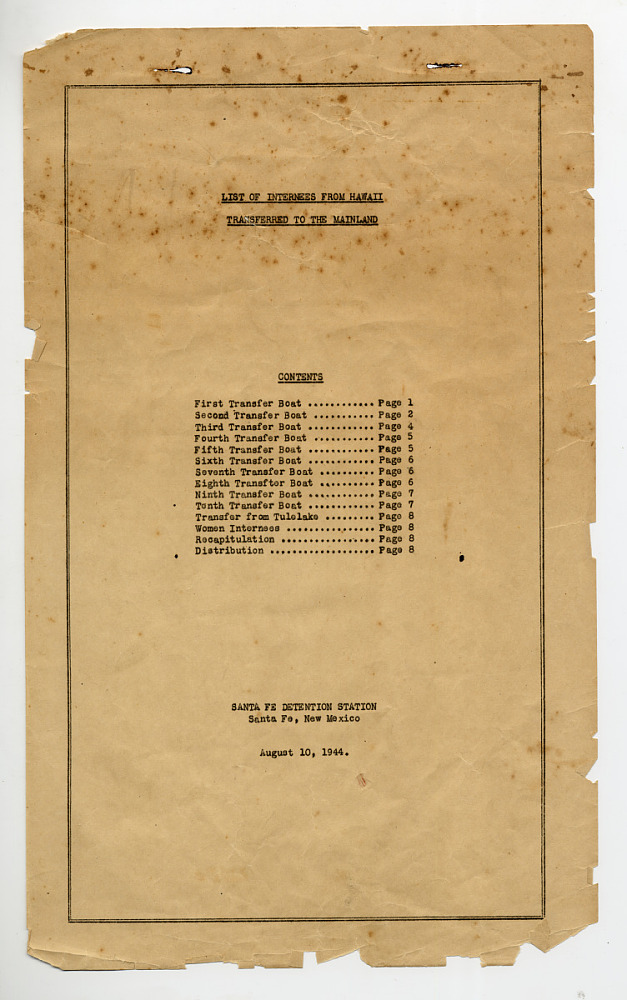 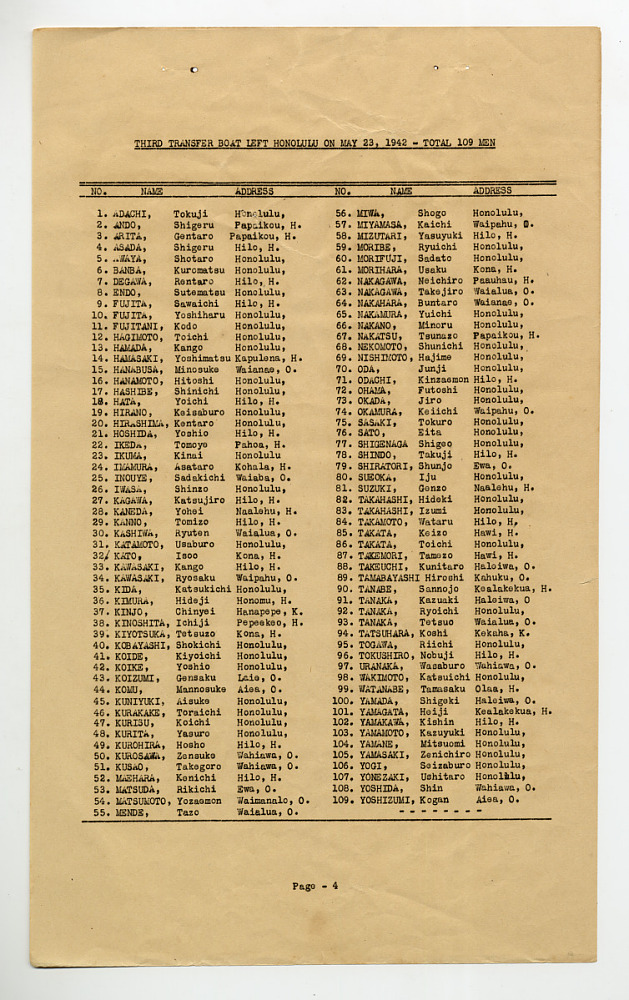 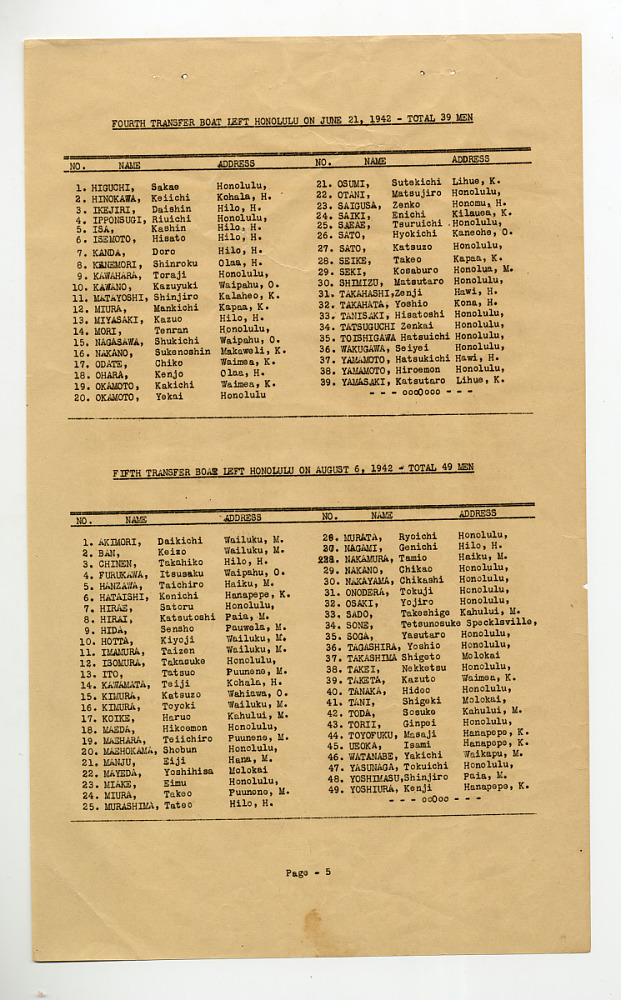 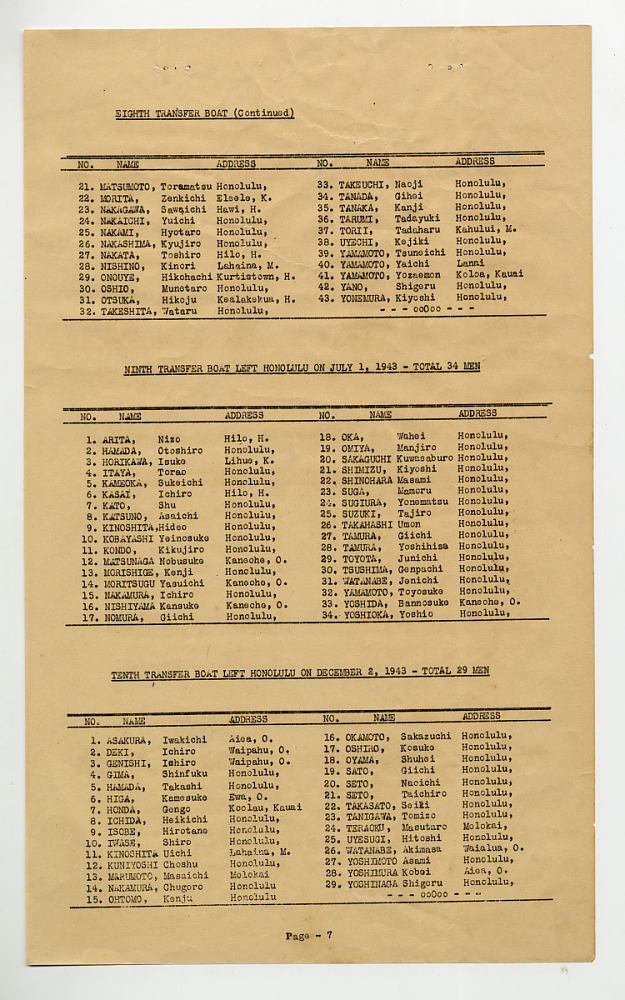 Description
This is a list of prisoners that were transferred from Hawai'i to the mainland, dated August 10, 1944 on ten separate transfer boats. The document itself comes from the Santa Fe Detention Station in Santa Fe, New Mexico. Seisaku Aoyagi is listed on page six and is one of twenty-eight men on the sixth transfer boat that left Honolulu on September 16, 1941.
Following the events of the Japanese attack on Pearl Harbor on December 7, 1941, the United States of America was swept up in a wave of hysteria. President Franklin D. Roosevelt signed Executive Order 9066. Executive Order 9066 authorized the creation of military zones and the exclusion of persons deemed a threat to national security from them. Much of the west coast was declared military zones, and this caused the forced relocation of 110,000 Japanese Americans from their homes into guarded prison camps in Arizona, California, Idaho, Wyoming, Arkansas, Utah, and New Mexico.
Because Hawai'i was a territory and not a state, Executive Order 9066 did not legally apply to the then Territory of Hawai'i. Executive Order 9489 was issued by Franklin D. Roosevel to control the Territory of Hawai'i. Executive Order 9489 authorized the Secretary of War to designate a Military Commander for the Territory of Hawai'i and to prescribe it as a military zone. Executive Order 9489 authorized the exclusion of those considered a danger to national security from the Territory of Hawai'i, and Seisaku Aoyagi was directly affected by this.
Seisaku Aoyagi was forcibly relocated from his home in Hilo, Hawai'i to the Lordsburg, New Mexico prison camp.
. It opened on June 15, 1942, and closed in 1944. Lordsburg held the largest number of Issei prisoners with a peak population of Issei at 1,500. Seisaku and Kin Aoyagi were both Issei. Lordsburg was an enemy alien camp managed by the Department of Justice, and its first prisoners consisted of a group of Japanese men deemed dangerous by the FBI.
The infamous killings of Toshio and Hirota Isomura happened at Lordsburg on July 27, 1942. These two elderly prisoners were shot and killed by a guard, Private First Class Clarence Burleson, who claimed they had been running towards the fence to escape. The guard was found not guilty by an army court-martial board even after prisoners testified that Kobata and Isomura were both physically disabled (Kobata had tuberculosis and Isomura had a bad back). This led to a protest of prisoners, and it turned out that Colonel Lundy had violated the Geneva Convention by forcing prisoners to build military facilities in harsh conditions without pay. Colonel Lundy was retired and Lordsburg was closed after this, with everyone in the camp relocating to the Santa Fe Detention Camp in New Mexico.
On October 22, 1945, The Commanding General ended the prohibition of all that were removed from Hawai’i under the provisions of Executive Order 9066 and Executive Order 9489 and stated that they were allowed to return. Seisaku Aoyagi returned to his home in Hilo, Hawai'i.
Location
Currently not on view