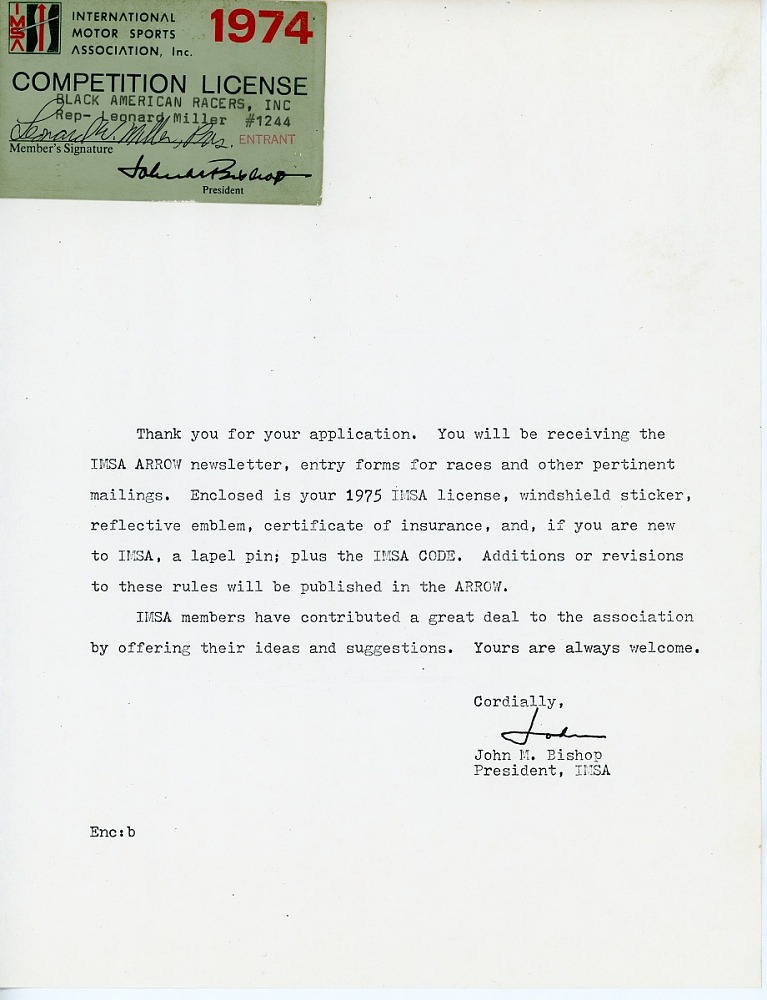 Description (Brief)
Competition license for Leonard W. Miller, president and owner of the Black American Racers team for the 1974 season. Miller was the president and owner of the Black American racers team. This license was used for BAR Formula Super Vee competition. His driver was a second generation African American, Benny Scott from Los Angeles.
In 1969, Len Miller and his brother Dexter for Miller Racing to race hot rods on the drag racing circuit in Pennsylvania, New Jersey and the Northeast. With success on the racetrack he formed Vanguard Racing in 1972 and was the first African American to enter a car in the Indianapolis 500. He then went on to found the Black American Racers Association in 1973. The goal of the organization was to “unify African-American drivers in all types of racing – stock car, open wheel, and drag racing -- pave the way for greater success and introduce race fans to African-American’s history in motorsports.”
Later that same year the Black American Racers, Inc. (BAR) was formed with Benny Scott as their second generation African-American driver. Also in 1973, BAR became the first team to have an African American driver compete in England. In 1975, BAR driver Benny Scott would break the color barrier at the Long Beach Grand Prix, when the team entered a Formula 5000 car in the inaugural race. Len and Benny Scott were inducted into the Black Athletes Hall of Fame for their achievements in motorsports in 1976. In 1978, BAR experienced a setback when their driver Tommy Thompson was killed in an accident at the Trenton Speedway. Many of the team members took a break after this tragedy and in the 1980s the team turned toward stock car racing.
Location
Currently not on view