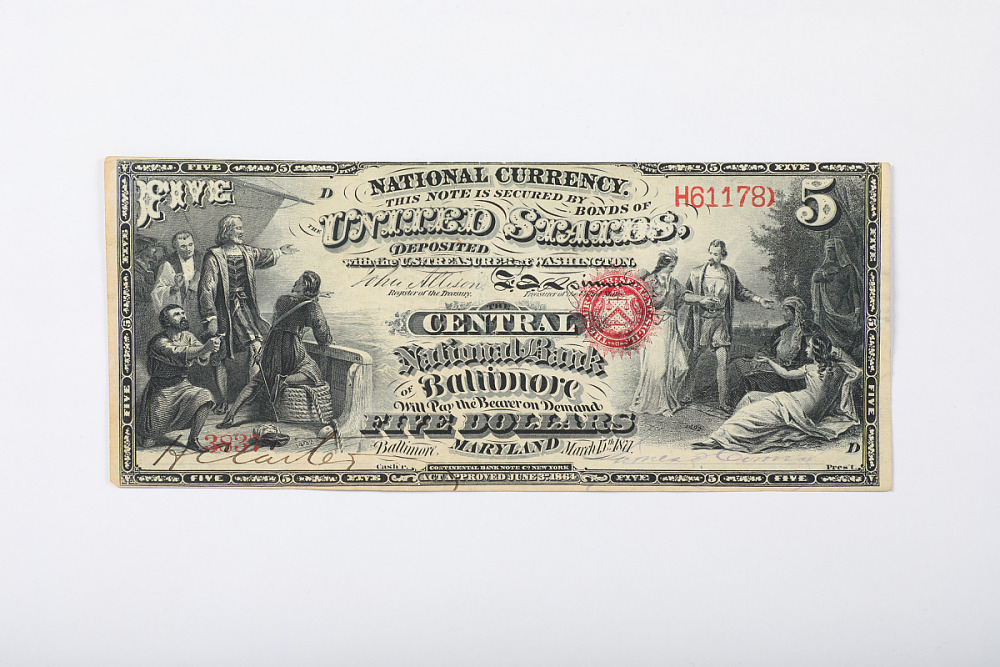 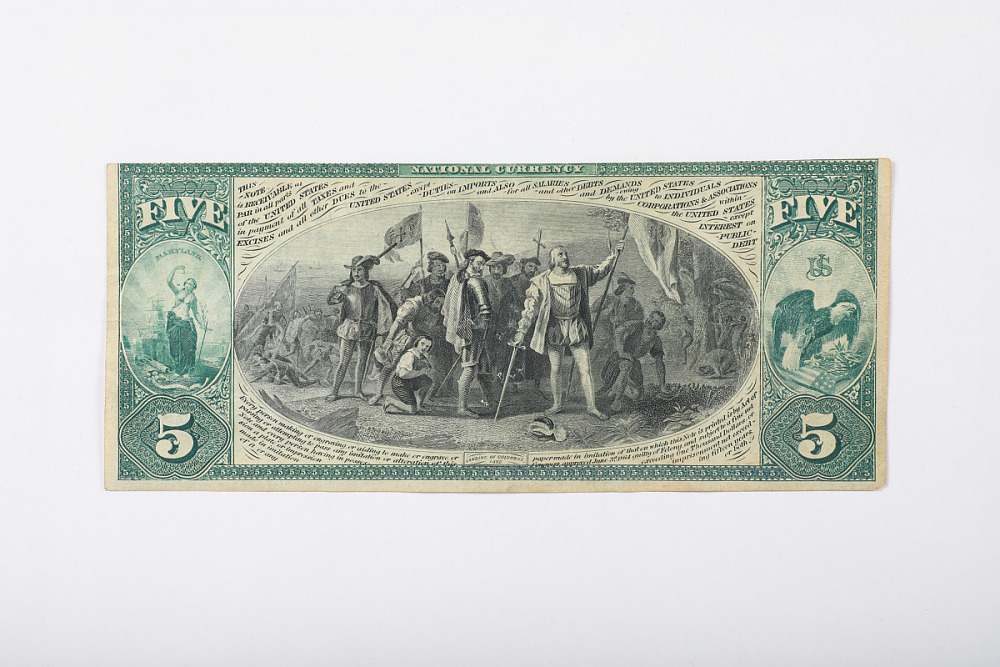 Description (Brief)
One (1) 5 dollar note
United States, 1871
Obverse Image: On left, Christopher Columbus and men in sight of land. On the right, Native American princess, representing America, being presented to figures representing the Old World.
Obverse Text: NATIONAL CURRENCY. / THIS NOTE IS SECURED BY BONDS OF THE UNITED STATES DEPOSITED WITH THE U.S. TREASURER AT WASHINGTON. / REGISTER OF THE TREASURY / TREASURER OF THE UNITED STATES / THE CENTRAL NATIONAL BANK OF BALTIMORE WILL PAY THE BEARER ON DEMAND FIVE DOLLARS / BALTIMORE, MARYLAND / MARCH 15TH, 1871. / CONTINENTAL BANK NOTE CO. NEW YORK / ACT APPROVED JUNE 3D. 1864 / CASH'R / PRES'T / H61178 / 3837 / D
Reverse Image: The landing of Christopher Columbus.
Reverse Text: FIVE / 5 / NATIONAL CURRENCY / THIS NOTE IS RECEIVABLE AT PAR IN ALL PARTS OF THE UNITED STATES IN PAYMENT OF ALL TAXES AND EXCISES AND ALL OTHER DUES TO THE UNITED STATES EXCEPT DUTIES ON IMPORTS AND ALSO FOR ALL SALARIES AND OTHER DEBTS AND DEMANDS OWING BY THE UNITED STATES TO INDIVIDUALS CORPORATIONS & ASSOCIATIONS WITHIN THE UNITED STATES EXCEPT INTEREST ON PUBLIC DEBT / EVERY PERSON MAKING OR ENGRAVING OR AIDING TO MAKE OR ENGRAVE OR PASSING OR ATTEMPTING TO PASS ANY IMITATION OR ALTERATION OF THIS NOTE AND EVERY PERSON HAVING IN POSSES-SION A PLATE OR IMPRESSION MADE IN IMITATION OF IT OR ANY PAPER MADE IN IMITATION OF THAT ON WHICH THIS NOTE IS PRINTED IS BY ACT OF CONGRESS APPROVED JUNE 3D. 1864 GUILTY OF FELONY AND SUBJECT TO A FINE NOT EXCEEDING ONE THOUSAND DOLLARS OR IMPRISONMENT NOT EXCEED-ING FIFTEEN YEARS OR BOTH. / LANDING OF COLUMBUS 1492 / MARYLAND
Description
In 1863 the U.S. issued its first national notes and decided to feature historically themed paintings from the Capitol Rotunda on the reverse. The paintings were shrunk from their original size of twelve by eight feet to a mere four-and-a-half by two-and-a-half inches, but maintained the detail and quality of the paintings. This decision converted national treasures into national currency.
John Vanderlyn’s painting of Italian explorer Christopher Columbus was installed in the Capitol Rotunda in 1847. It depicts the landing of Columbus on a beach in the West Indies in 1492. This moment is often regarded as the beginning of European engagement with the Americas. The painting is replicated on the first five dollar national note.
Location
Currently not on view

Credit Line
U. S. Department of the Treasury