Atlanta, Georgia, As It Appeared on the Entrance of the Union Army under General Sherman, Sept. 2, 1864.

Atlanta, Georgia, As It Appeared on the Entrance of the Union Army under General Sherman, Sept. 2, 1864. 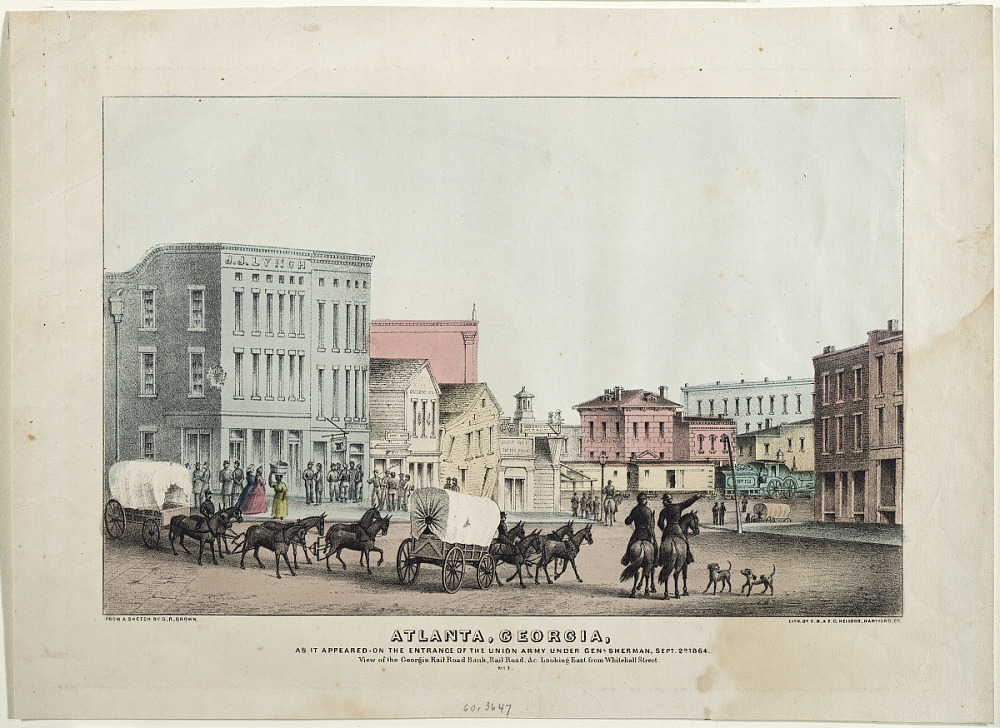 Description
During the war, Atlanta, Georgia, served as a major hub on the railroads supplying the Confederacy. Following a victory at Chattanooga, the Union Army began an invasion of Georgia, commanded by General William Tecumseh Sherman. Several battles outside of Atlanta were followed by a four-month-long siege of the Confederate army there. On September 1, 1864, Confederate General John Bell Hood decided to withdraw his men from the city, and the mayor surrendered to Sherman the next day. This print shows the Union general’s men entering the city. Two horse drawn covered wagons process through the city. To the right of these, two mounted Union officers gaze upon the urban center. A train is situated among the buildings in the background, referencing the city’s strategic importance to the Confederacy.
Both Sherman and Grant believed the Union Army would only be victorious if it could completely break the Confederacy both economically and psychologically. From Atlanta, Sherman launched his famous march to the sea, commanding the Army of the Tennessee and the Army of Georgia on a scorched earth campaign through Georgia during the winter of 1864, destroying Southern railroads, telegraph lines, and farms. Upon leaving the city of Atlanta on November 15, he ordered that the city be burnt to the ground, sparing only its churches and hospitals.
This colored lithograph was produced by the Hartford, Connecticut firm of E.B. & E.C. Kellogg. Edmund Burke Kellogg and Elijah Chapman Kellogg were younger brothers of the founder of the Kellogg lithography firm, Daniel Wright Kellogg. After Daniel Wright Kellogg moved west, his two brothers took over the family lithography firm in 1840 and changed the name to E.B. & E.C. Kellogg. They were responsible for the continued success of the family firm and involved in partnerships with Horace Thayer in 1846-47, John Chenevard Comstock in 1848 and William Henry Bulkeley in 1867.
Location
Currently not on view