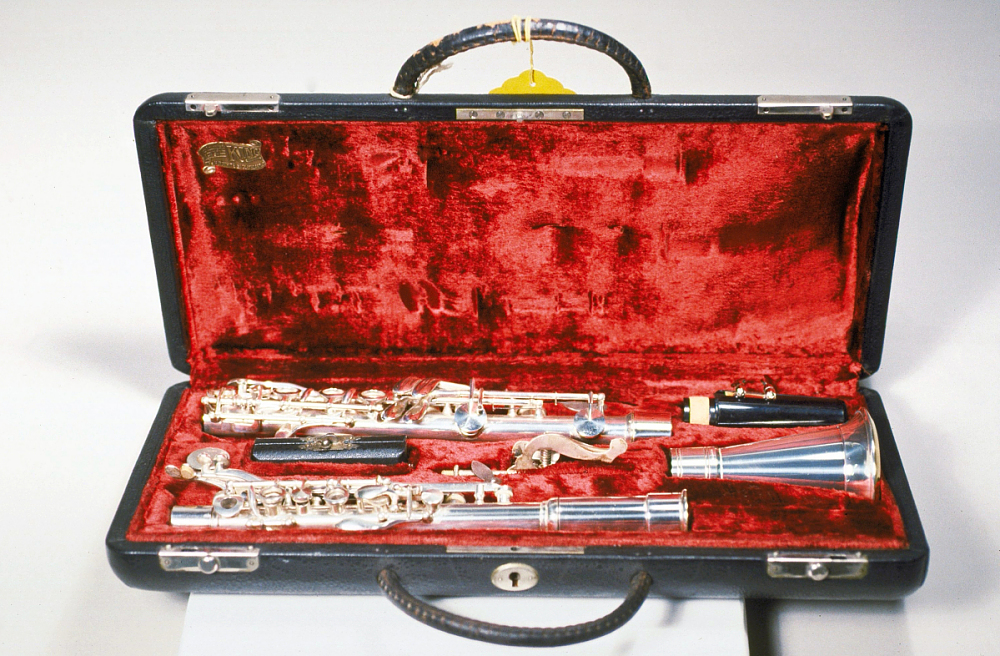 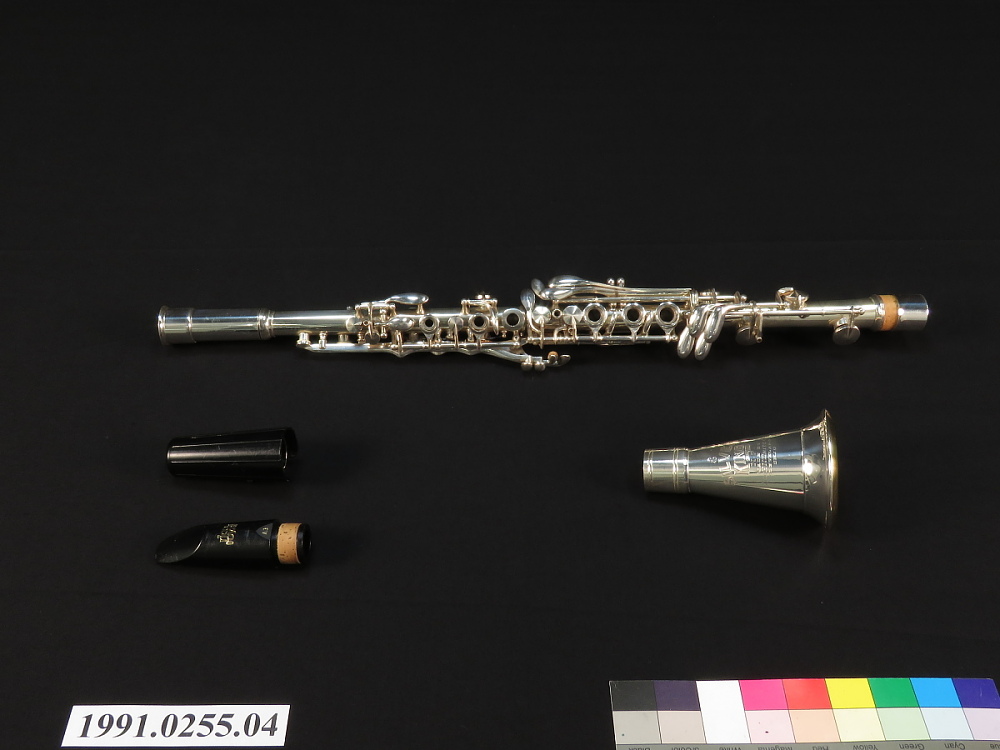 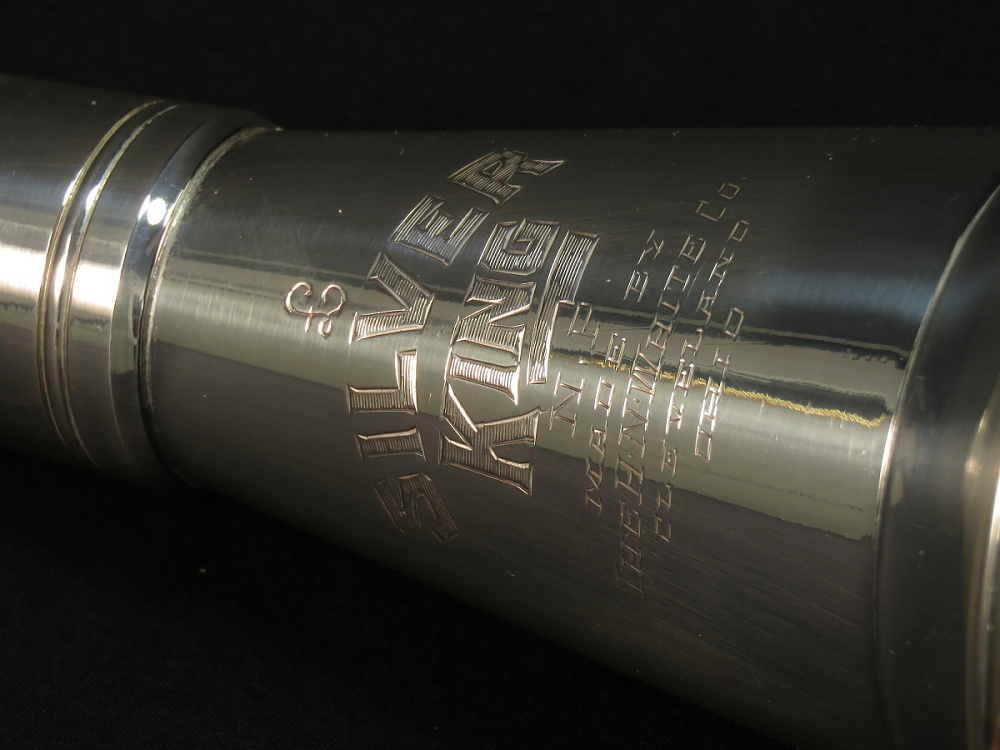 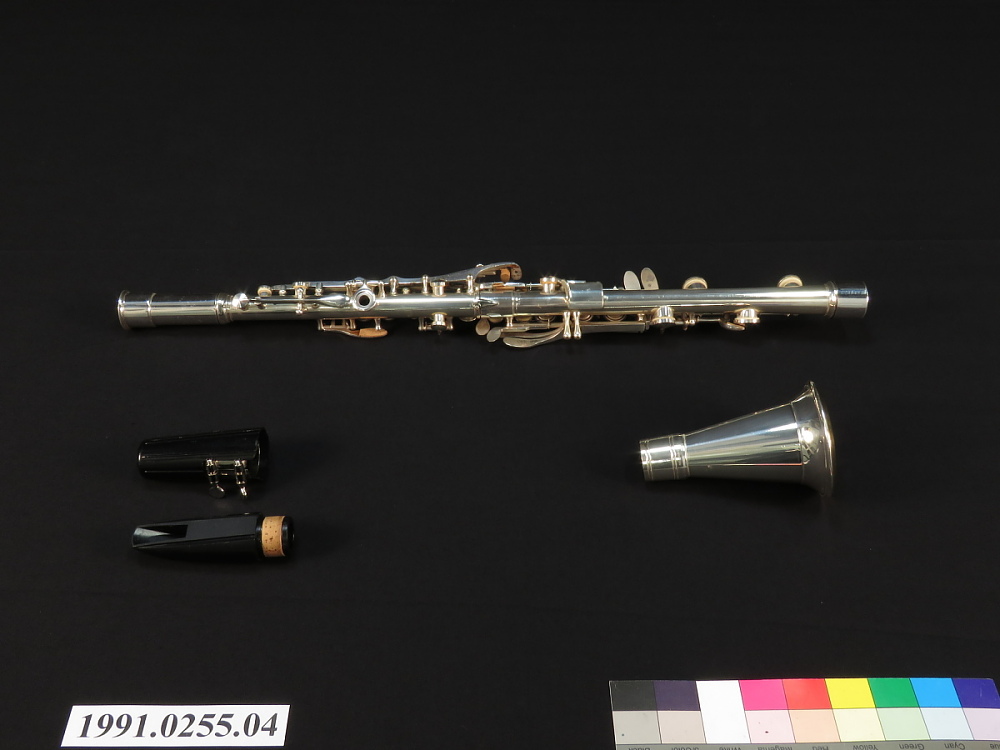 This clarinet was made by Henderson N. White in Cleveland, Ohio about 1940. It is a Boehm System clarinet in B-flat, Silver King model serial #299564, made of nickel silver with gold plate inside the bell. This clarinet is engraved:

This clarinet features United States Patent #2194513, March 26, 1940 awarded to Henderson N. White for a “Musical Instrument,” which was for the manufacture of a metal clarinet bell.

reply
The instrument body is not in fact "Silver" but "Nickel-Silver" The Bell is made from "Sterling Silver" The "Silver King" marking reflects an honour bestowed by the H.N White Co. upon it's professional grade instruments to a Mr. King, a gentleman associated Henderson N White with from the early days of the H.N White Co. The "N.P" marking on the bell reflects "Nickel Plated" - the entire instrument was nickel plated to prevent tarnish of the base material. The "Patented Bell" was a large improvement from prior designs of clarinet bells. A large collection of H.N White information is available at http://www.hnwhite.com/second%20page.htm. The United States federal (and state governments) government purchased a large quantity of these instruments for various official concert and marching bands - the instruments were the best that could be obtained. Interestingly, the H.N White Co. did not "Invent" the metal/silver clarinet. THE HAYNES-SCHWELM CO. established in Boston in 1913 (with Wm. S. Haynes, Jr. as manager) made custom built "German silver" (Nickel Silver), sterling silver and gold flutes. This firm also supervised the making and distribution of a professional metal clarinet, made in Providence, Rhode Island. The metal clarinet was made from "spring-hard nickel-silver" as this gave more resonance. These instruments had two walls with a thermos air chamber between them and the tone holes were soldered onto the tube. Experiments by Haynes have shown this to be the best way to retain the hardness and resonant tone. Lead, silver, and gold are used for soldering the instrument together. In the case of Gold, hard running solder is used first and then soft running. The Haynes Co., later delved into one-piece, thick walled German Silver and Sterling Silver clarinets - One such clarinet sold for 10,000$ US at auction in 2019. The CUNDY-BETTONEY CO. - Harry Bettoney emigrated from England to Boston in 1893. In 1897 he also started in business as an employee of W. H. Cundy. Soon after 1900 Mr. Bettoney bought out E. H. Wurlitzer. One year later Mr. Bettoney began to make flutes and piccolos, while continuing to import and sell clarinets. About 1907 Mr. Bettoney bought out the Cundy Music Publishing Co. and the firm of E. C. Ramsdel. The making of clarinets by Bettoney was begun in 1912. In 1919 The Cundy-Bettoney Co. bought out the "Boston Musical Instrument Company" (B.M.I.C.) BMIC were well known for their high quality "Three * * * / 3 Star" instruments. Around this time a gentleman by the name of "Harry Pedler" emigrated from England to the USA and began working for Bettoney. Mr. Pedler, suspected to be an English craftsman - properly apprenticed and trades accredited in the UK, was a maker of custom built high quality single wall "Metal Clarinets" made of German Silver. These clarinets were made to order for various individuals or music shops - they are distinct by way of their thumb rest, however their design - largely that of flute manufacture - appears to be that introduced later in 1925 by Bettony. Mr. Pedler subsequently opened his own musical instrument business. In September 1925 the Cundy-Bettoney Co introduced a single wall "metal clarinet" into its' product line. The "Silva-Bet", patented March 21, 1929 was the top of the line model, with 3 Star / *** Star models being of a slightly lower quality. Since the introduction of their metal clarinet 1925 , the Cundy-Bettoney Co., almost entirely manufactured metal clarinets. In 1925 no major manufacturer in the world was mass manufacturing metal clarinets when the Cundy-Bettoney Co. introduced their metal clarinet. The Cundy-Bettoney Co., due to mass production of such a quality instrument is recognised for the 1st "Successful mass-manufactured Metal Clarinet." The Cundy-Bettoney Co. offered a large variety of different grades of metal clarinets. The popular ones being the "Silva-Bet, 3 Star, "The Boston Wonder" and the "P. X. Laube." Cundy-Bettoney Co clarinets were sold everywhere in the United States and exported to many European nations. A special "hard white metal" - Nickel Silver / German Silver" variant was used for the body of Cundy-Bettoney Co metal clarinets. Among the special features of Cundy-Bettoney Co metal clarinets are the following: A single metal tube body with raised tone holes, The F# & F tone holes were closed by fingers. The G tone hole, closed by a cap carried on a lever pivoted on bearings. Cundy-Bettoney Co claimed the metal clarinet was more accurately made and could be played more easily than the wood clarinet. Cundy-Bettoney "Silva-Bet" clarinets became the standard against which United States Government specifications for clarinets were based. This was later changed when the H,N White "Silver King" professional grade metal clarinet with the reinforced bell (1938 patent) was introduced. The H.N. White "Cleveland" (Gold Lacquered) series metal clarinet is an intermediate version of the "Silver King". My wife owns 4 "Silver King" clarinets, one without the reinforced bell and 3 with the reinforced bell - one of which has a removable bell. She also owns 3 H.N White "Cleveland" metal clarinets, one without the reinforced bell and 2 with the reinforced bell. Interestingly, whilst the "Silver King" single body clarinets play bright, the single body "Cleveland" models sound more like her R-13 Buffet wood clarinet. The 4 piece "Silver King" with the removable bell also sounds like the R-13 Buffet wood clarinet - this is due to the 2 piece body and improvements in air flow control that 2 piece body allows during manufacture.

reply
Why would a nickel silver instrument be silver plated? I don't know what the N.P. stands for but so far I have seen that marking only on Silver Kings that also were marked U.S. meaning made for the US military. These instruments appear to be silver plated. Metal clarinets were made at least as far back as 1830. Haynes is notable for making double walled instruments out of solid sterling silver.