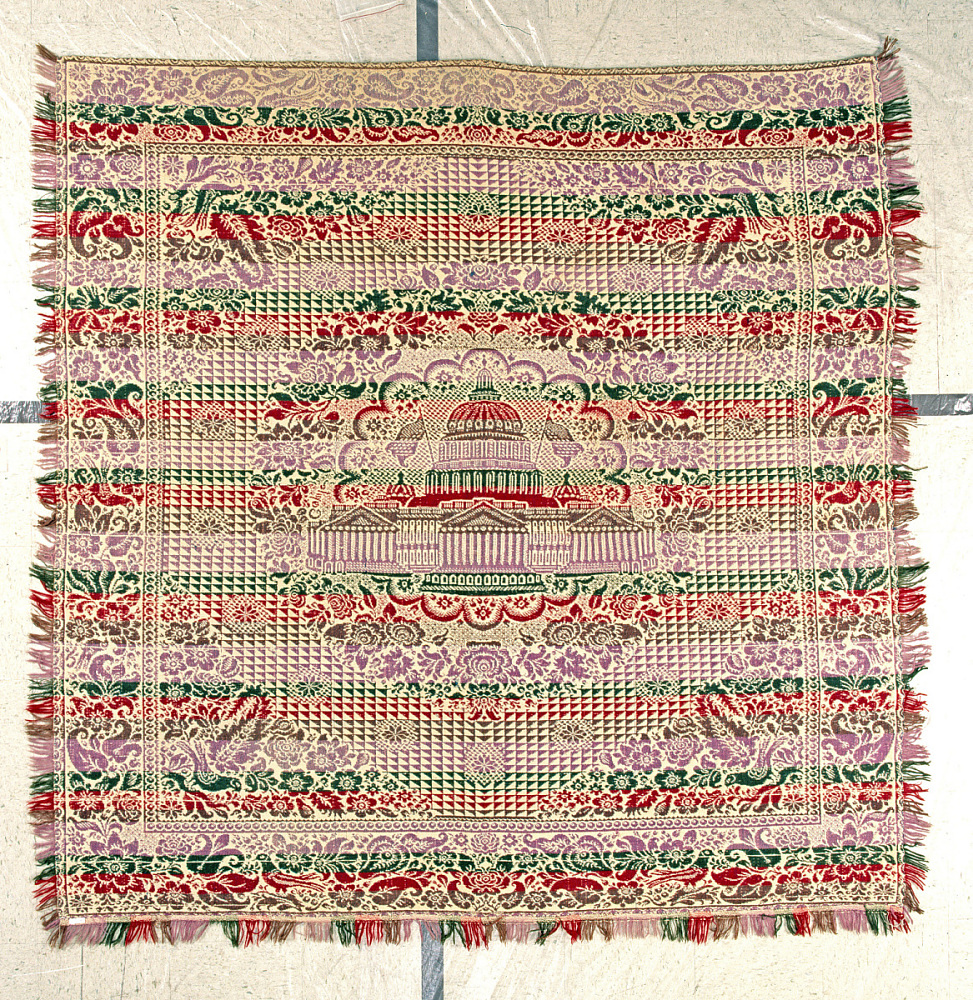 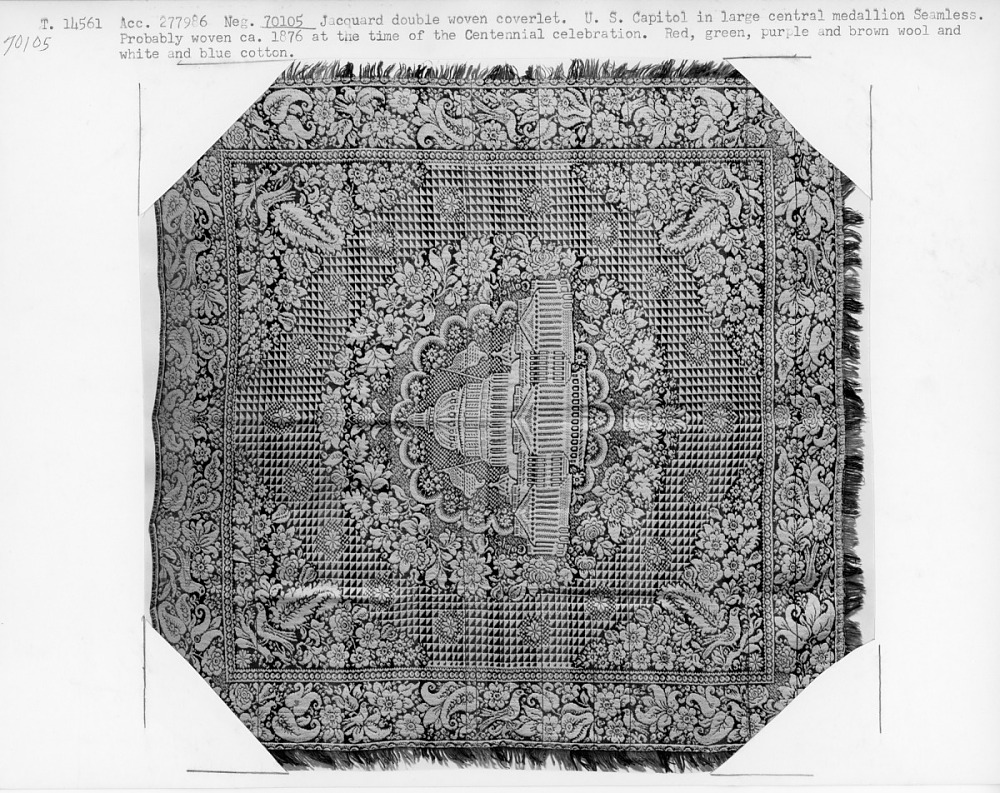 Description
Weavers at the Lancaster Carpet, Coverlet, Quilt, and Yarn Manufactory, owned by Philip Schum likely wove this Jacquard, mauve, red, green, and brown, double-cloth coverlet sometime between 1856 and 1880. The centerfield features a large central medallion made up of concentric floral wreaths. Inside these medallions is a large representation of the United States Capitol. The centerfield ground is made up of shaded triangles. Each corner of the centerfield design features a bird surrounded by flowers and above the bird is a boteh, a motif found on Kashmiri shawls and later European copies commonly referred to as Paisley pattern. The four-sided border is composed of meandering floral and foliate designs. There are not traditional cornerblocks on this coverlet, but there are large floral or foliate medallions in each corner that are very similar to those used on signed Philip Schum coverlets. There is fringe along three sides. This coverlet was woven on a broadloom, and possibly a power loom.
Philip Schum (1814-1880) was born in Hesse-Darmstadt, Holy Roman Empire. He immigrated to New York, moving to Lancaster County, PA in approximately 1844. He was not trained as a weaver and there is no evidence that he ever was. What we do know is that Philip Schum was a savvy businessman. He worked first as a "Malt Tramper" in New York, a position presumably linked to brewing and malting of grains. After six months, Philip was able to afford to bring his first wife Ana Margartha Bond (1820-1875) to join him in Pennsylvania. Once reunited, Philip worked as a day laborer, shoemaker, and basket-maker. He purchased a small general store in Lancaster City in 1852. By 1856, he has built his business enough to sell at a profit and purchase the Lancaster Carpet, Coverlet, Quilt, and Yarn Manufactory. Philip's first wife, Anna, passed away sometime before 1879, because in this year, Philip married his second wife, Anna Margaret Koch (1834-1880). The two were tragically killed in a train accident in 1880, when a locomotive stuck their horse and buggy. The New Era, a local Lancaster newspaper titled the article about the incident with the headline, "Death's Harvest." Lancaster Carpet, Coverlet, Quilt, and Yarn Manufactory began with just one or two looms and four men. It grew to four looms and eight men quickly. By 1875, the factory had twenty looms and employed forty men. Philip Schum was no weaver. He was an entrepreneur and businessman who invested in the growing market for household textiles. Philip's estate inventory included a carpet shop, weaving shop, dye house, two stores, and a coal yard. At the time of his death were also listed 390 "Half-wool coverlets." These were valued at $920. In 1878, Philip partnered with his son, John E. Schum to form, Philip Schum, Son, and Co. Another Schum coverlet is in the collections of the MFA-Houston. This particular coverlet was purchased by the donor's grandfather in either Cincinnati or Pittsburg while he was serving as a ship's carpenter along the Ohio River trade routes. The family would later settle in Crawford County, Indiana. This fact also shows that Philip Schum's coverlets, quilts, yarn, etc. were not just being made for the local market. Schum was transporting his goods west and presumably in other directions. He was making for an American market.
Location
Currently not on view