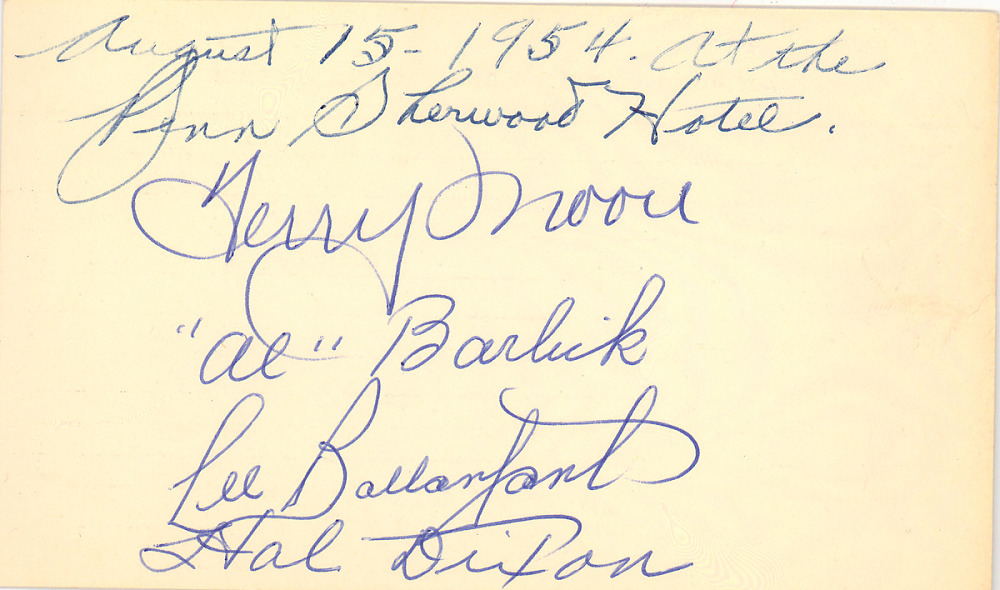 Description
Card signed by Terry Moore, Al Barlick, Lee Ballanfant, and Hal Dixon. Card is marked as having been signed at the Penn Sherwood Hotel in 1954.
Terry Moore (1912-1995) was a centerfielder for the St. Louis Cardinals from 1935-1938, missing the 1946-1948 seasons due to military service. A four time All-Star, the outfielder played on two World Championship teams (1942, 1946.)
Moore finished his career with a lifetime batting average of.280, with 80 home runs and 513 runs batted in. He would manage the Philadelphia Phillies for half a season in 1935.
Al Barlick, Edward Lee Ballanfant and Hal Dixon were umpires in Major League Baseball.
Barlick (1915-1995) umpired in the Majors from 1940-1971, missing four seasons over the course of his career: two for military service and two for health-related reasons. In that time he was selected to officiate seven All-Star games and seven World Series. Barlick later worked to find, train and supervise umpires. In 1989 he was elected into the National Baseball Hall of Fame.
Edward Lee Ballanfant (1895-1987) umpired in the MLB from 1936-1957, officiating four World Series and four All-Star games in that time. After his umpiring career, Ballanfant served as a scout for the Chicago Cubs, the Houston Astros, and the Texas Rangers.
Hal Dixon (1920-1966) umpired for seven seasons (1953-1959,) working one All-Star Game and one World Series in that time.
Location
Currently not on view