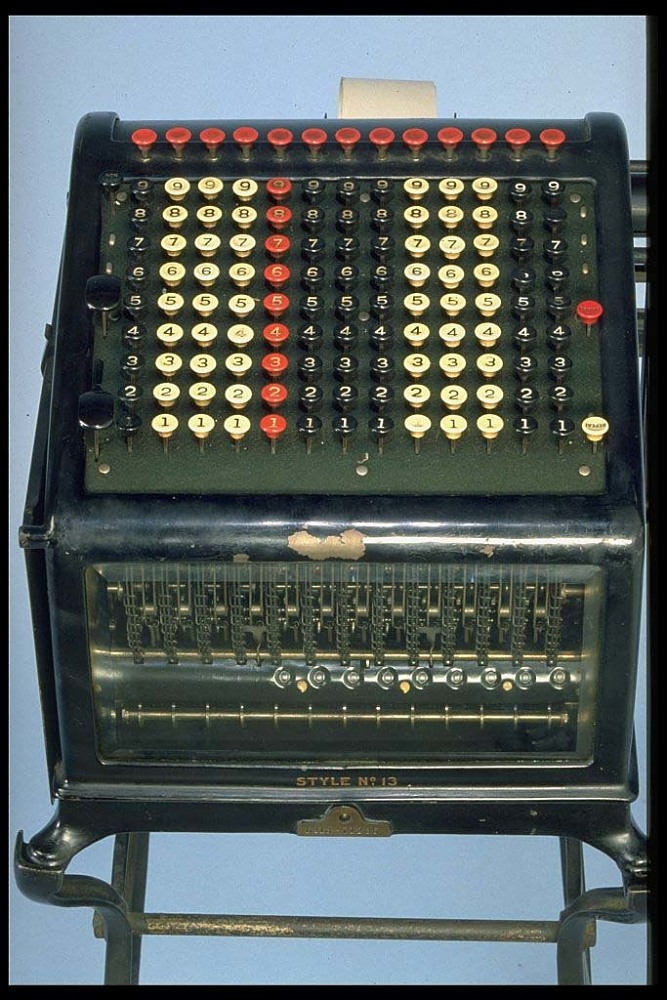 Description
This full-keyboard printing manual adding machine has a black metal body with a glass front. The mechanism is metal, as is the collapsible stand attached to the left side, the crank on the right side, and the stand. The knob on the crank is wooden. There are 13 columns of plastic-topped keys, each with nine keys. The leftmost column of keys is black, the next three columns white, the next column red, the next three columns black, the next three columns white, and the two rightmost columns are black. Once one key in a column is depressed, a second key in that column cannot be depressed. Above these is a tenth row, 12 columns wide, of red correction keys. One can read up to nine-digit entries on a display visible through the glass front. The 12-1/4”-wide carriage and the paper tape are at the back and not visible to the operator. The error and repeat keys are to the right of the keyboard with a non add key and two other interconnected keys on the left. The portion of the frame immediately below the keys is covered with green felt.
The machine is marked at the base of the front: STYLE No. 13. It is marked on a metal tag below this: No 13 71235. The Burroughs Style 13 was manufactured from 1906 until 1912.
African American civil servant and inventor Shelby Davidson (1868-1931) hoped to introduce a modified version of this machine for work at the U.S. Post Office. For details, see the work of Rayvon Fouché cited.
Reference:
Rayvon Fouché, Black Inventors in the Age of Segregation: Granville T. Woods, Lewis H. Latimer, and Shelby J. Davidson. Baltimore: Johns Hopkins University Press, 2003, esp. pp. 125-168.
Location
Currently not on view

reply
I own a 17-column Burroughs adding machine. The serial number is etched into the front: "No. 17 - 74090". When I first found the machine, I contacted Burroughs. They told me the machine was made in 1911. I have owned the adding machine at least since 1979, when I was living in Chicago. Some years earlier, I found it in the corner of a shed on a farm, where it had been stored for many years. I noticed the faint impression of rows and columns of circles that showed up on the angled surface of about an inch of dust and dirt that covered what turned out to be the keyboard. A sale of farm tools and equipment was underway, and I had been exploring nooks and crannies. I inquired about the price, and got the machine for a few dollars because I agreed to haul it away. It weighs over eighty pounds, not including the stand. It took me weeks to brush away the accumulated dirt from the top and clean each key individually. The steel and glass case seemed to have protected the machinery inside, but the case was locked and there was no cylindrical key to be found. After many attempts, I finally open the case by moving the latch with levers I manipulated from the rear of the case. The moving parts appeared to be rust-free. I brushed and gently blew out the dust and dirt. After applying tiny amounts of thin oil, I attempted to move the lever on the side, and amazingly, it worked. None of the many machines I have seen has had more than 13 columns, and I believe 17 columns was the largest model made (seventeen columns can display an amount in dollars and cents that is one penny short of a quadrillion dollars, that's 999,999,999,999,999.99). The machine only adds, so subtraction is done by adding the 10s complement; multiplication requires adding and shifting; and I've even done division in order to amuse friends. At the time it was built, the cost of my adding machine was approximately the same cost as an automobile. Businesses bought it because it greatly increased the accuracy of calculations and decreased the cost of doing them. Interestingly, the calculator on my phone can't display a trillion. For over thirty years, in my home office, I have used the adding machine to balance my checkbook, track income and expense, and to do calculations.