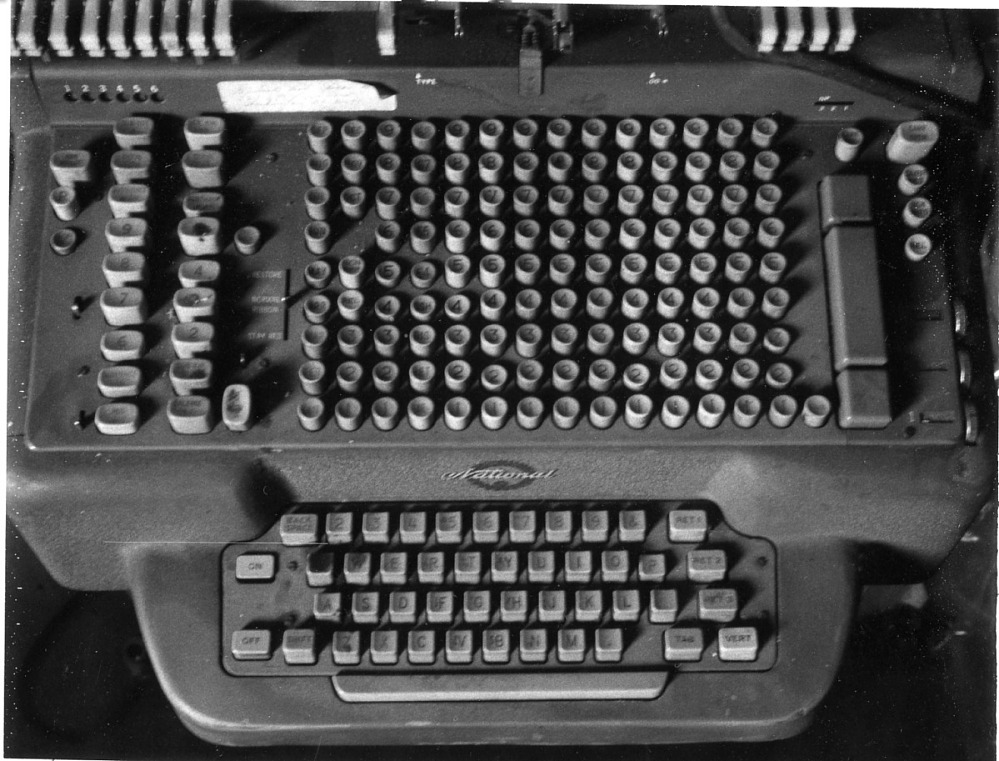 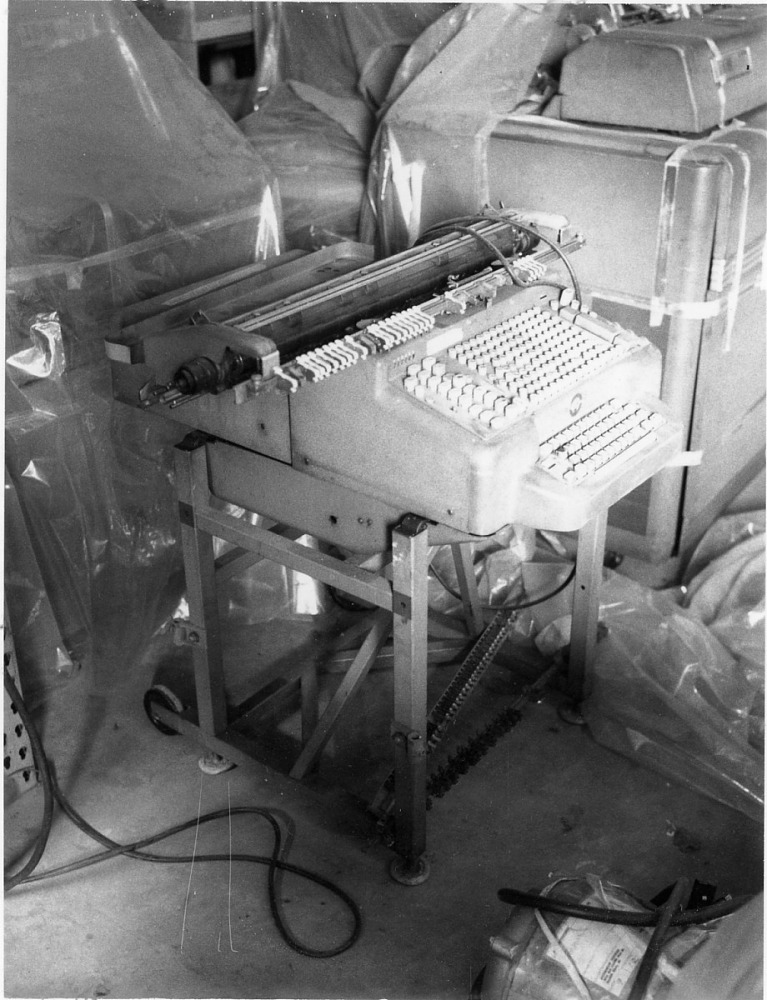 Description
During the years immediately following World War II, demand for National Cash Register products boomed. In late 1949 the company introduced a new line of accounting machines, successors to the class 2000 and class 3000. It included the Class 31 and Class 32. This is an NCR Class 31 machine from 1952.
The machine combines an electric typewriter at the front with an adding machine in the center. The adding machine has ten columns of digit keys and four columns of keys for indicating dates and types of transactions to the left of these. It has diverse function keys and bars.
A wide variety of forms could be fed through the carriage at the back of the machine and printed out. A serrated metal bar is in front of the wide carriage and has 20-odd plastic and metal pieces clipped to it. Two other bars and a cover are loose with the machine.
A mark above the typewriter keyboard reads: National. A metal label on the right side reads: 5025100 (/) SP-RB (/) 31-10-10(18)26. The first part of this mark is the serial number. The phrase “SP-RB” indicates that the machine has a split platen and an extra removable bar. The next numbers indicate that the machine is a Class 31 capable of printing ten totals and ten amount rows. The 18 signifies the style of the machine — one with a keyboard dater with months, days and years; five year and four symbol keys in row 11; and a typewriter keyboard.
Accounting machines were used to prepare monthly statements, type checks, record payroll, and do general ledger work. This example was used at the Lansburgh department store in downtown Washington, D.C.
References:
NCR, Reference Manual Class 31A Class 32A, August, 1965, Montgomery County Historical Society, Dayton, Ohio.
Accession File.
Location
Currently not on view

reply
The metal bar was set up with 10 slots per inch because the printing pitch was 1o characters per inch. The "stops," were two metal plates separated by a nylon (or pot metal) block in the back and a metal block in the front. The front metal block was for carriage control, perhaps better understood as a tab stop. There were different levels of forward tab stops and return stops. Forward was carriage movement to the left (print to the right) and return was carriage movement to the right (usually to prepare for the next line.) Different length plates were inserted into specific holes in the plastic portion to determine action, e.g., take input from the keyboard and add/subtract it to a specific total accumulator; print a specific total; take input from the keyboard but don't print it; etc. Accumulators were a stack of 13 or 14 ten-position gears. Each tooth had a base-10 value of 0, 1, 2, 3, 4, 5, 6, 7, 8, or 9. When a specific gear rolled past 9 to 0, the next higher gear moved forward one tooth. When it rolled from 0 to 9 the next lower gear moved backwards one tooth. Addition was performed by moving each gear forward by the value entered (and locked) on the keyboard, one place value at a time. Subtraction moved the ear backwards. Some of the more interesting mechanics was how to transfer a specific total to the print head. The numeric print head was separate from the typewriter. It consisted of 9 to 13 plates (inflation) that slid against each other. each plate would be moved to match the gear position of the desired total accumulator and the entire head struck the ribbon, paper, and print roller simultaneously. Accounting machines were always used with several paper forms simultaneously. First was a journal. This could be a cut sheet to be mounted in a binder or a continuous roll. In front of the journal was often a ledger, a piece of card stock. On top of this might be a check. In the early days, carbon was applied directly to the back of the ledger and the check so that printing would show on all sheets. National Cash Register invented something called micro-encapsulation. It was used for diverse items like jellied gas (Napalm) and time-release medicine capsules. But a huge use was to encapsulate two chemicals that when combined would form a permanent ink. One chemical would be put on the front of a piece of paper, the other on the back of the paper in front. The coatings were clear. When a print head struck the paper, the micro-encapsulation bubbles burst, the chemicals mixed, and print appeared on the sheets not touched by the ink ribbon. This treated paper is still known as NCR paper. The split platten (rubber carriage roller) was used to permit the advancement of one side of the platten separately from the other side. This was useful for printing checks while updating a ledger card. The "program" for the accounting machine was held on the carriage bar. Designing the program entailed laying out the desired forms on specially-designed graph paper, then drawing stops to land on the columns, marking carriage control requirements, and marking which columns required input or just printed totals. The simplest program was usually General Ledger. The first column was balance forward, entered by the operator from the ending balance on the ledger to be updated. This usually printed on the journal only and added to total 1, and the operator visually verified the entered value. The next column was a date stamp, followed by a column the operator could type a transaction description. The next stop was Debit. Here he machine would pause for the operator to enter a number or press the tab button to advance to the Credit column and make an entry there. Which ever entry was performed, the balance in total 1 was adjusted up or down. The carriage was then automatically advanced to the next stop where the new balance in total 1 was printed and the carriage returned "balance forward." The operator also controlled the carriage motion by pressing "motor bars." These are the three outsize keys just to the right of the numeric keyboard. The large one in the center was just forward to the next stop, and as I recall the bottom one was a skip and the top was a return, but memory is failing me here. If your machine no loner operates, it probably only needs a bath in Varsol, a compressed air dry, a bath it 10 weight oil, and a long drip to remove excess oil. It may be "balled-up" which means the gears are jammed, possibly due to gummy deposits or gear damage. The mechanism can be cranked to advance it through cycles without engaging the motor.

reply
I own a Class 32 machine, the slightly less sophisticated sibling of the Class 31. These are a mechanical engineering marvel. Even with the original NCR maintenance manual, it is a real struggle to troubleshoot. Thank you Dudley for your input on this piece of accounting history!