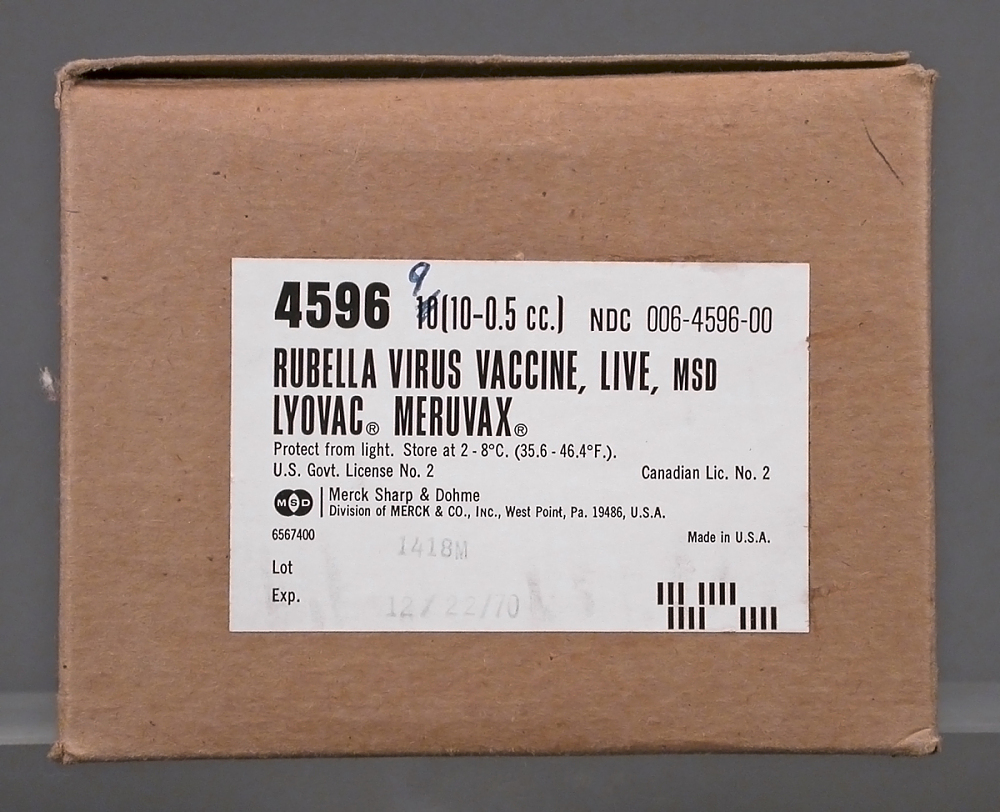 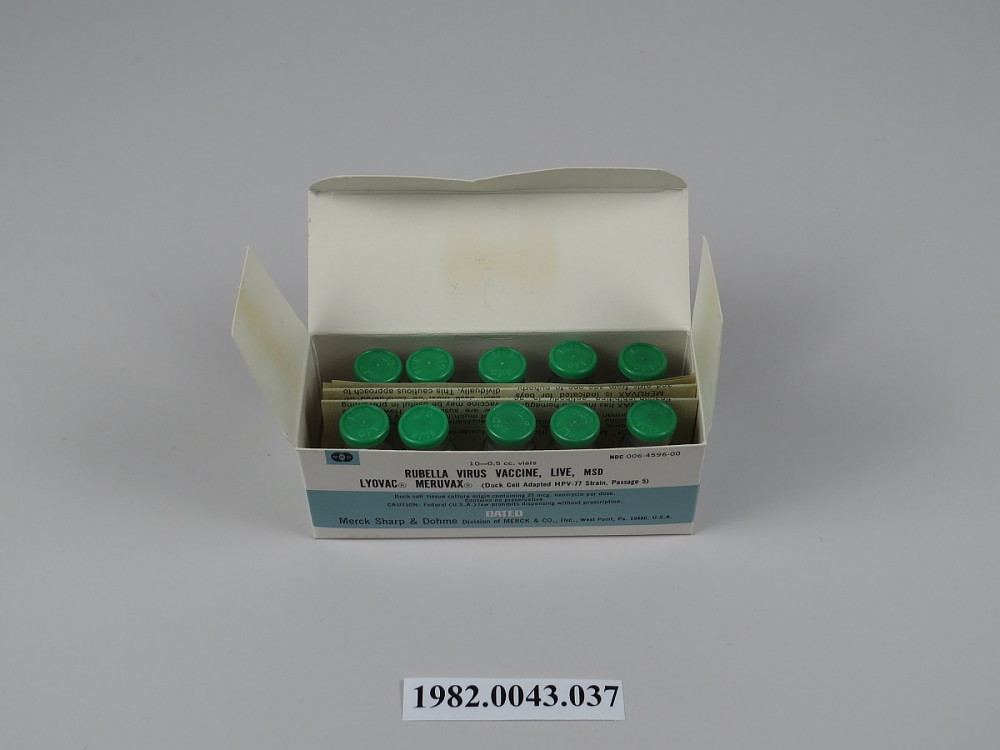 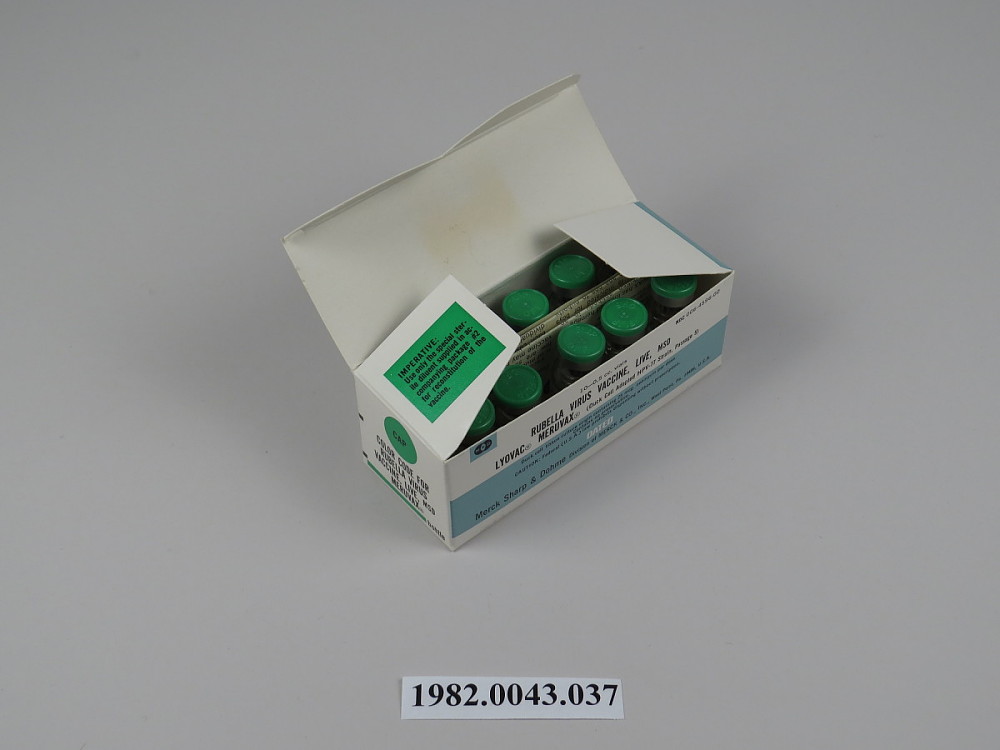 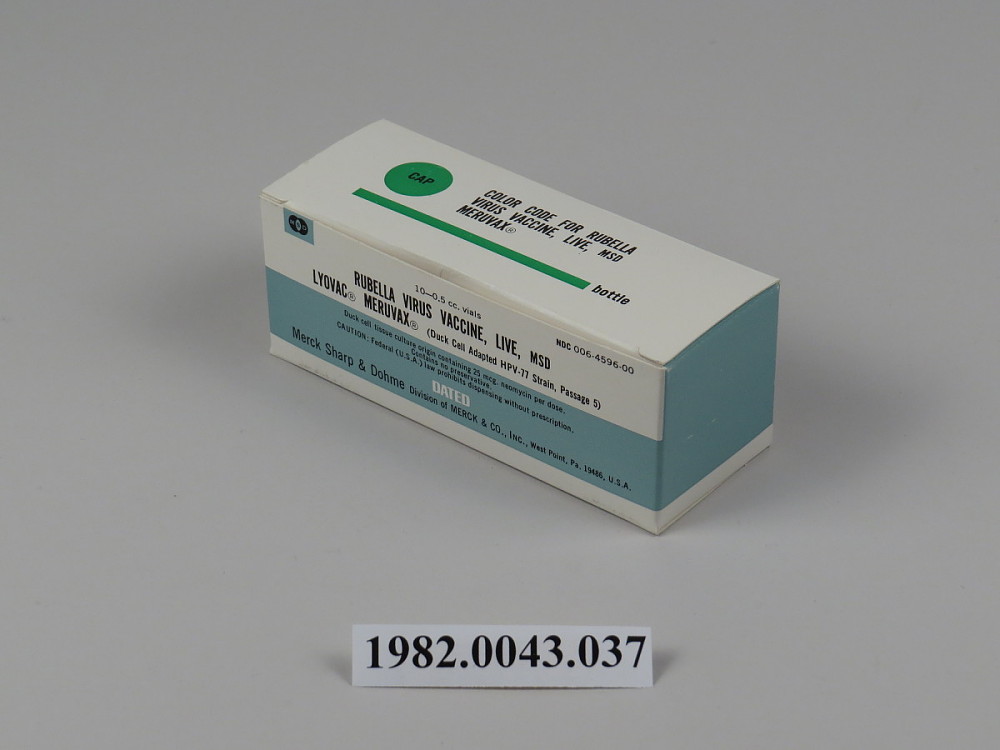 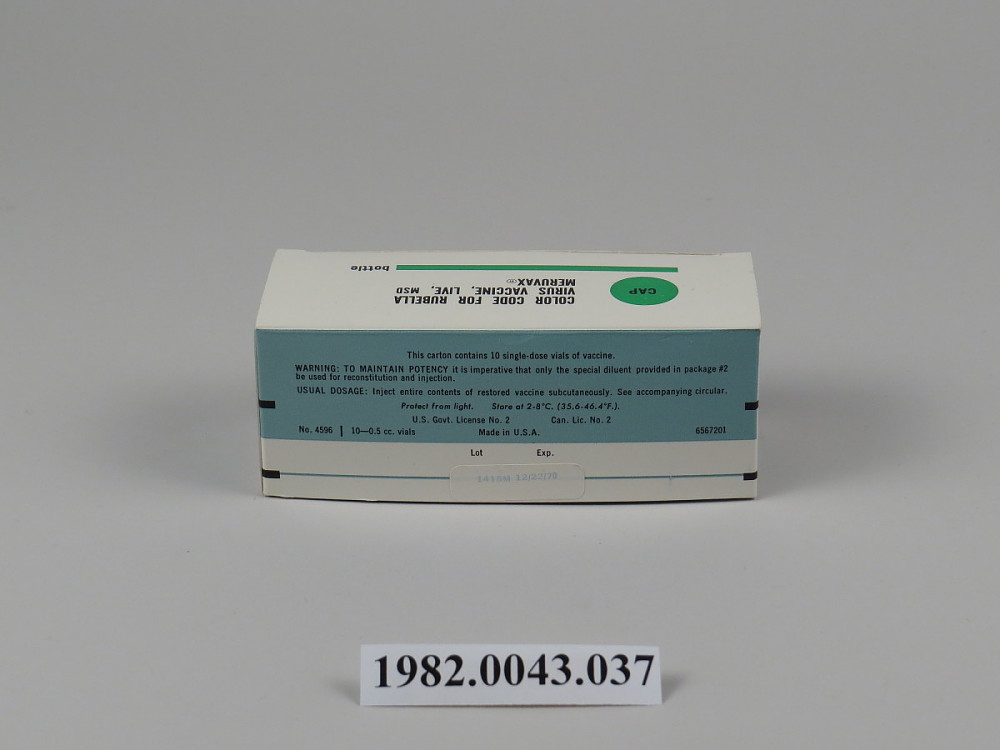 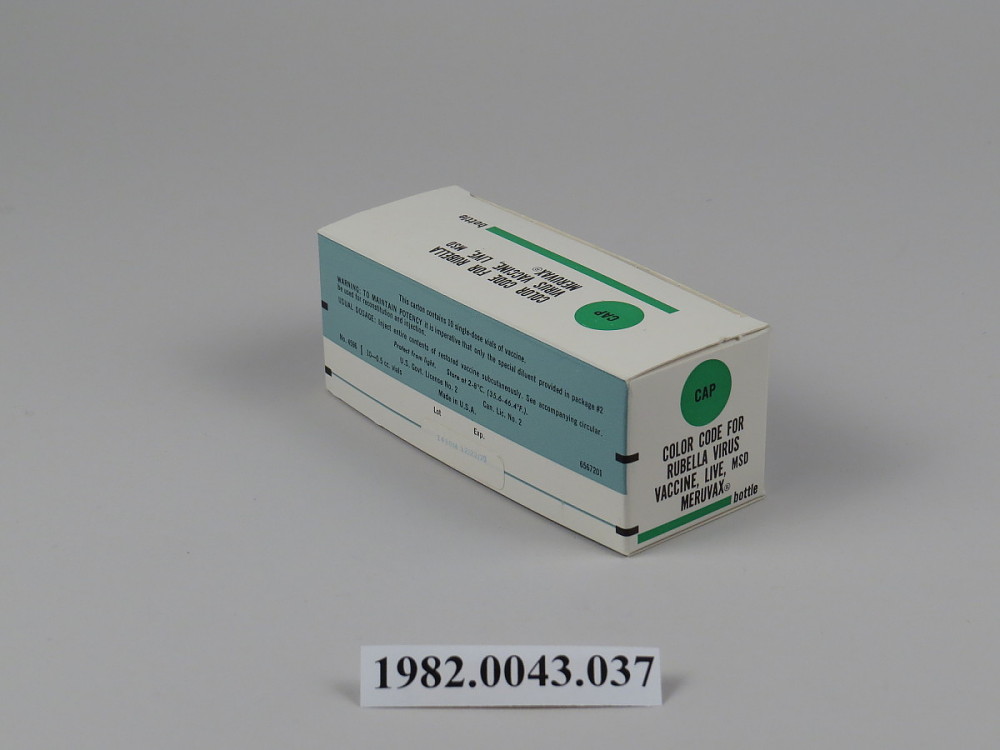 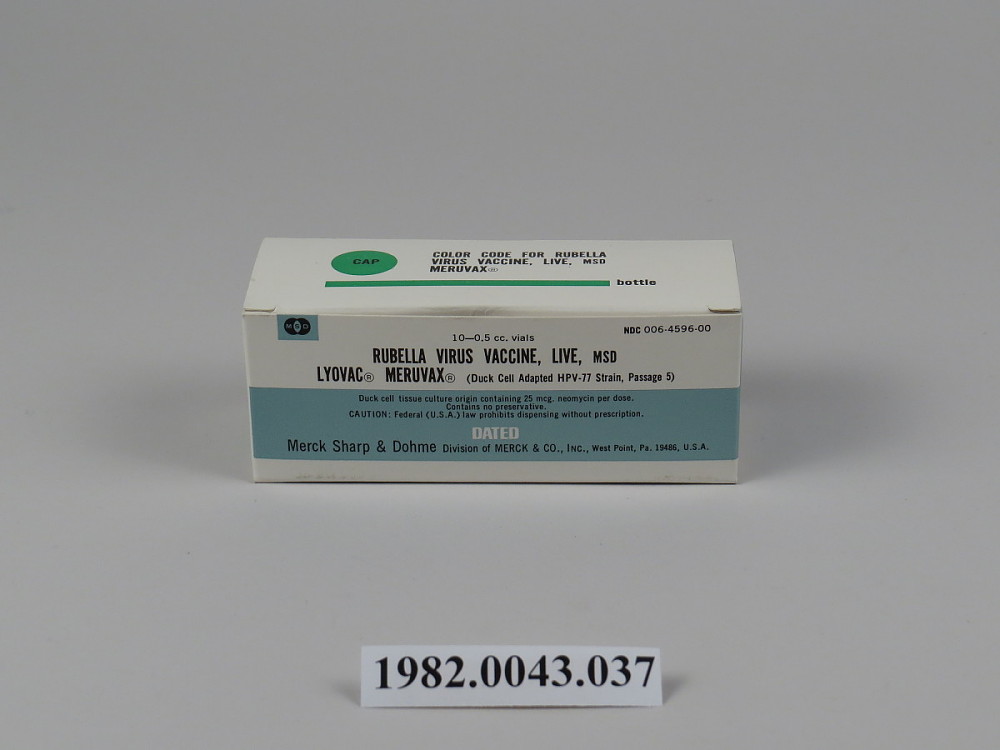 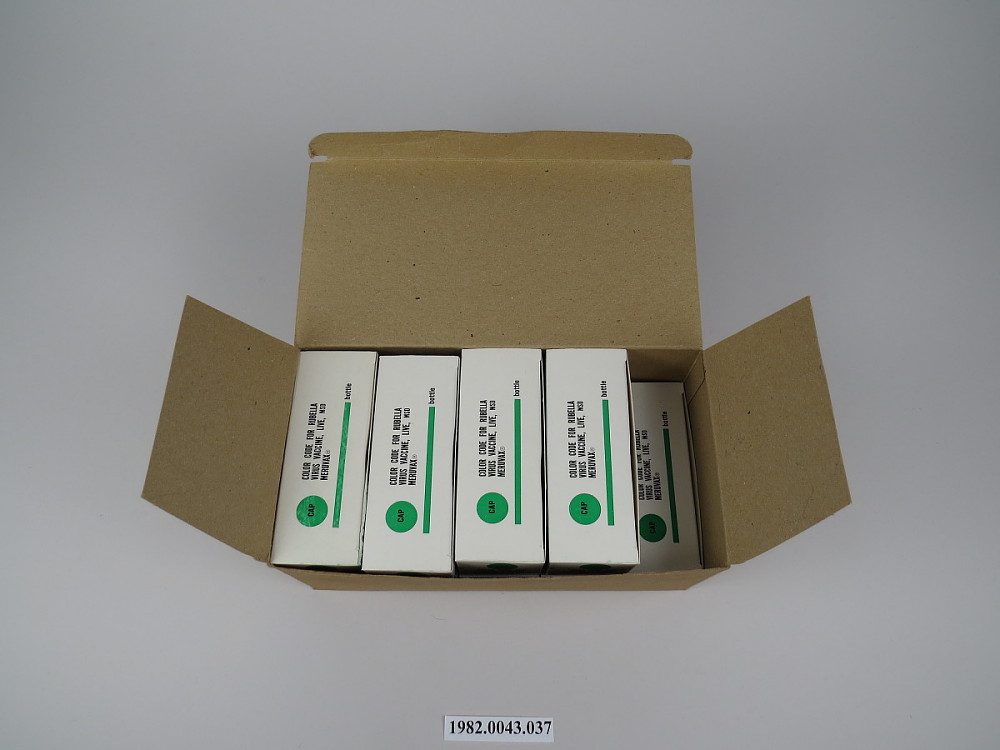 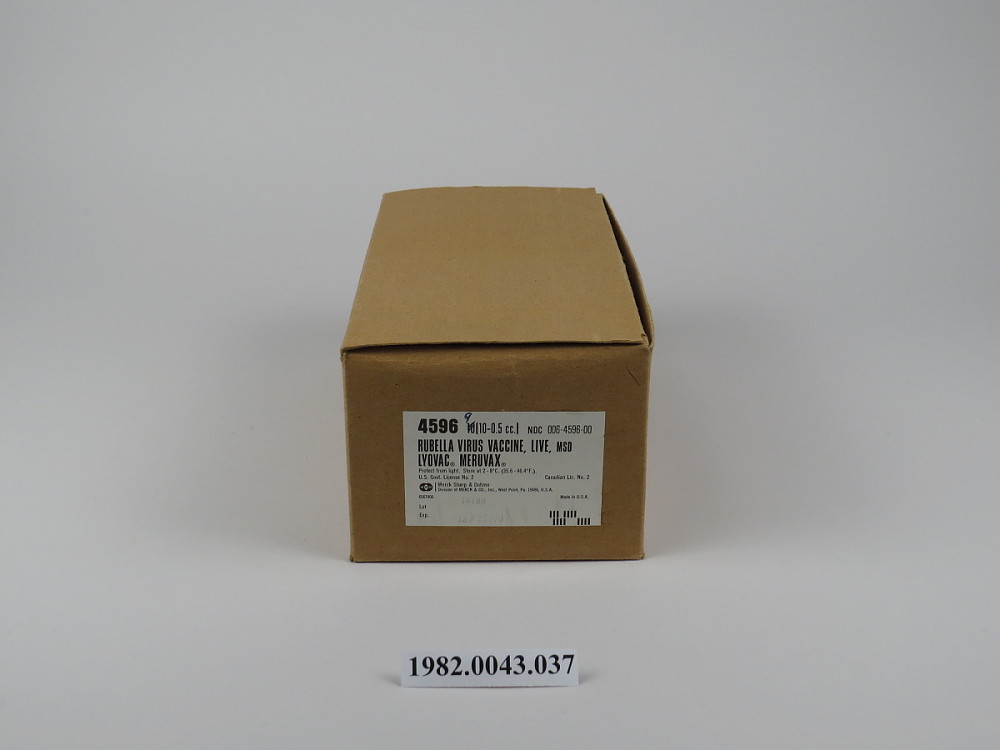 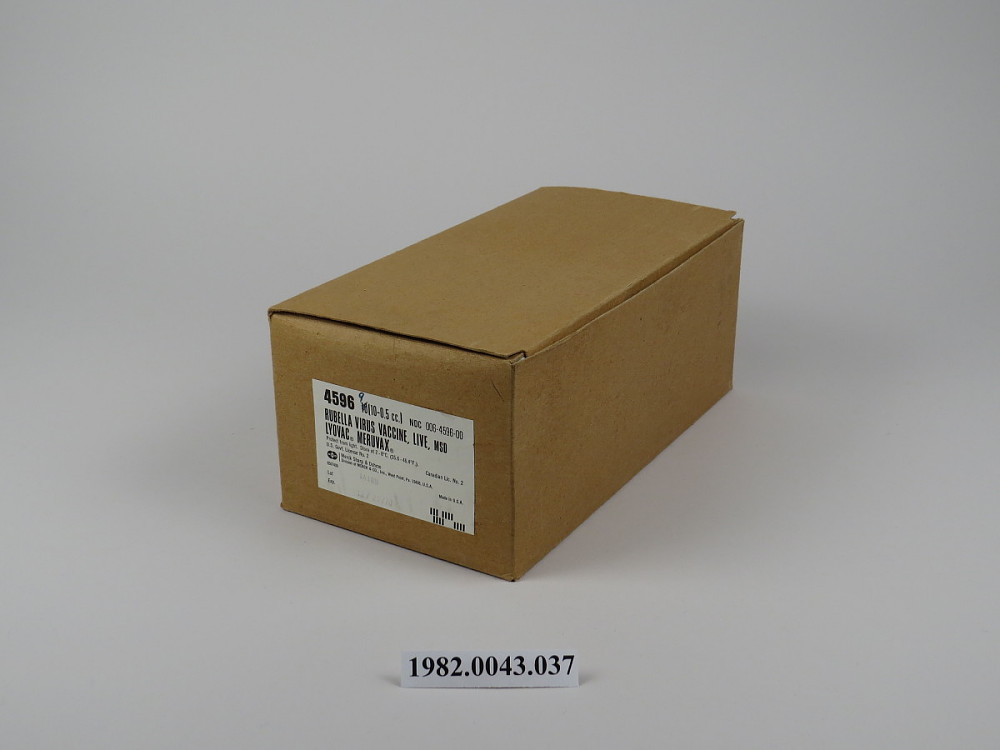 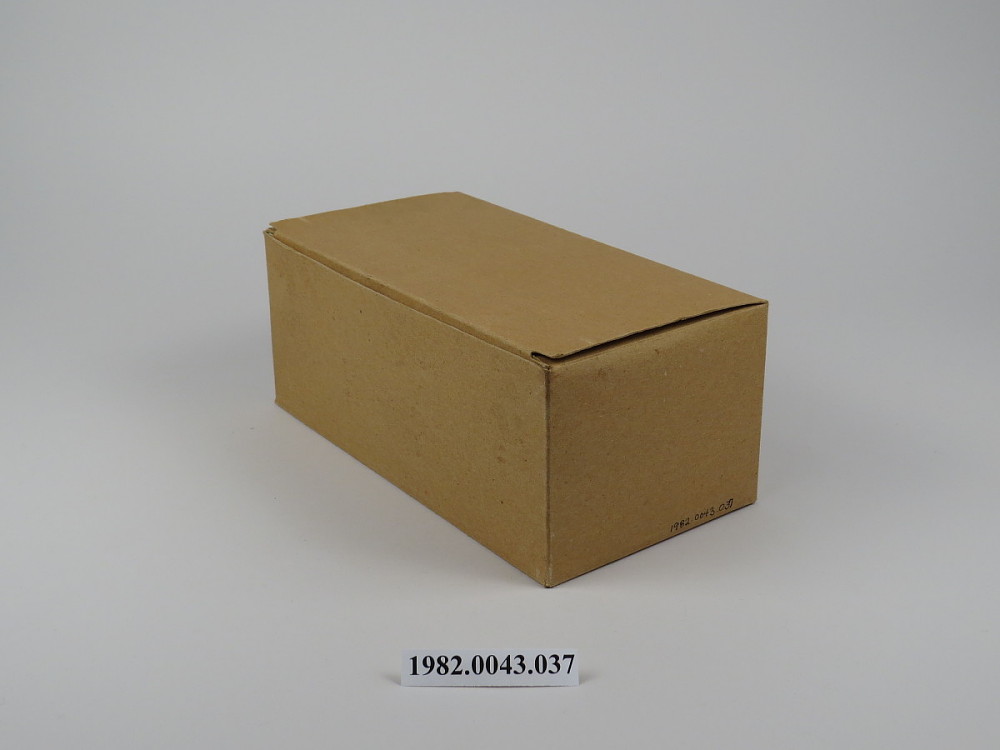 Description
The is an example of the first rubella vaccine, Meruvax (Duck Cell Adapted HPV-77 Strain, Passage 5), manufactured around 1970. This vaccine was replaced in 1979 with a new vaccine using a different viral strain and growth medium.
Metaphors of war and combat are almost impossible to avoid when describing humankind's struggle to control infectious disease. The war may be endless, but significant battles have been won (and some lost) along the way, and one of our most effective weapons has been vaccination. One such victory was declared in April 2014 when the Pan American Health Organization of the World Health Organization (PAHO/WHO) announced that rubella, a viral disease commonly known as German measles, had been eliminated from the Americas. Although the disease, spread by contact with an infected person through coughing or sneezing, is still prevalent in other parts of the world and imported cases sporadically appear, the last case of rubella to originate in the western hemisphere occurred in 2009. Rubella is the third human disease to be eliminated from the Americas through vaccination—the first was smallpox in 1971 and the second was polio in 1994. Only smallpox has been eradicated globally.
Rubella, a fairly mild childhood disease, was not considered a particularly dangerous foe until 1941 when an Australian ophthalmologist, Norman Gregg, discovered a link between the incidence of congenital cataracts in infants and mothers infected with rubella during pregnancy. This was the first report of what is now termed congenital rubella syndrome (CRS). Women exposed to rubella in early pregnancy are at high risk for miscarriages and still births, or their infants may be born with visual and hearing impairments, heart defects, neurological damage, and other lifelong disabilities. CRS rose to national attention following the U.S. rubella epidemic of 1964-65, which resulted in an estimated 20,000 cases of CRS and another 20,000 fetal deaths.
Following this outbreak, American scientists raced to produce an effective vaccine before the next rubella epidemic occurred. In 1969, the FDA approved Meruvax, developed at the Merck Sharp & Dohme research laboratories in West Point, Pennsylvania. As with many vaccines, Meruvax employs a live virus, although the rubella virus has been weakened (or attenuated) by growing it in a series of laboratory cell cultures known as "passages." Researchers at Merck used a duck embryo cell culture for the rubella virus.
With a vaccine now available, the United States launched a nation-wide vaccination campaign to dramatically reduce the incidence of the disease. Public health officials decided that vaccinating all pre-adolescent children was the best way to protect pregnant women from contracting the virus.
Successful vaccination campaigns depend on public education and outreach, and rubella presented unique challenges. Parents were being asked to have their children vaccinated in order to protect unborn babies—the health benefit to the vaccinated child was not the issue. Instead, the campaign appealed directly to the individual's sense of responsibility to the wider community.
With federal support, state and local health departments launched aggressive programs offering free vaccination in the schools and through special vaccination days and community clinics. By early 1971, about 23 million children had been vaccinated, representing about 40% of the target population.
In the Michigan campaigns, Rubella Hero medals were awarded to all vaccinated children in Kindergarten through third grade. As the state's Public Health officials declared: "The vaccinated youngster is a brave knight, a dragon fighter, and a Rubella hero insignia includes a representation of the defeated Rubella Dragon. This unique public information approach was developed to fit the unique nature of the entire immunization effort. Essentially the effort aims at vaccination of one segment of the population in order to protect another totally different segment."
But while the vaccinated youngster was a hero, the unvaccinated child was a menace—a lurking threat to pregnant women and their unborn babies. The campaigns also played on emotions of fear and pity to persuade both parents and children to participate in the vaccination effort. Children with CRS, displaying visible signs of hearing and vision loss, bone or brain damage, were featured in campaign literature and on posters—much like the polio poster children from a previous generation.
The U.S. campaign in the early 1970s was largely successful and the expected rubella epidemic of the mid-decade did not occur. Two years after the rubella vaccine was approved, Merck Sharp & Dohme developed a combination vaccine for measles, mumps, and rubella (MMR). Once the MMR vaccine became routine for infants and children, public education about rubella in the U.S. lost much of its urgency and this early campaign is now largely forgotten. Still the war is far from over, and the Centers for Disease Control and Prevention estimates that 110,000 babies are born each year with congenital rubella syndrome, largely in southeast Asia and Africa. Clearly the world is still in need of Rubella Heroes.
Location
Currently not on view