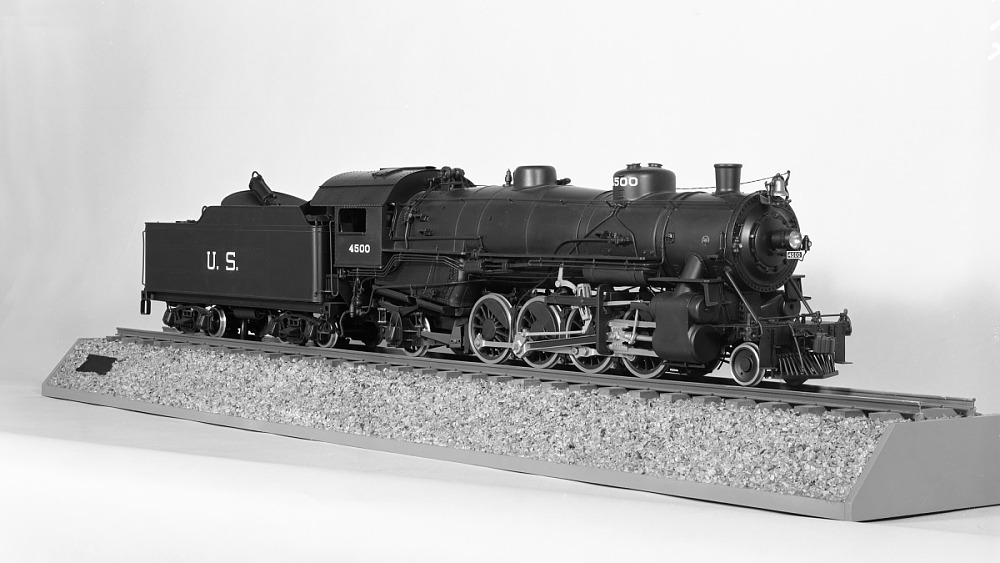 Description
This is a model of the Baltimore & Ohio Railroad’s No. 4500, completed in July 1918 by the Baldwin Locomotive Works. This model is part of the collection displayed in the museum’s Railroad Hall exhibit of 1964-2002 to illustrate the technological development of the locomotive.
Soon after the United States entered World War I in April of 1917, the nation’s railroads proved incapable of handling the increased wartime traffic. Outdated facilities and equipment caused congestion and stalled movement. In December of 1917, the federal government assumed control of all domestic railroads through the United States Railroad Administration (USRA) to provide centralized and efficient operation during the war. Typically, locomotive builders designed engines to the specific requirements of individual railroads. However, to meet the wartime shortage of locomotives, the USRA decided to mass-produce twelve standard designs. The USRA locomotives performed quite well; that another 4000 machines were built on these plans after the abolishment of the USRA in 1920 testifies to the soundness of their design.
The No. 4500 was the first engine built to standard USRA design. It was constructed in just twenty days at a cost of $53,600, and was assigned to the Baltimore & Ohio Railroad. Retired around 1959, the engine is exhibited today at the B&O Railroad Museum in Baltimore, MD.
Of the more than 1800 engines built on USRA plans, 625 of them were identical to the No. 4500. Steam locomotives are often classified by wheel arrangement, in the order of leading, driving, and trailing wheels. This engine has two leading wheels, eight driving wheels, and two trailing wheels. It is therefore classified as a 2-8-2 locomotive, also known as the Mikado type. The Mikado was one of the most widely used freight locomotives in the country; some 14,000 were built between 1905 and 1930, and many remained in service until the end of steam operations around 1960.
Location
Currently on loan