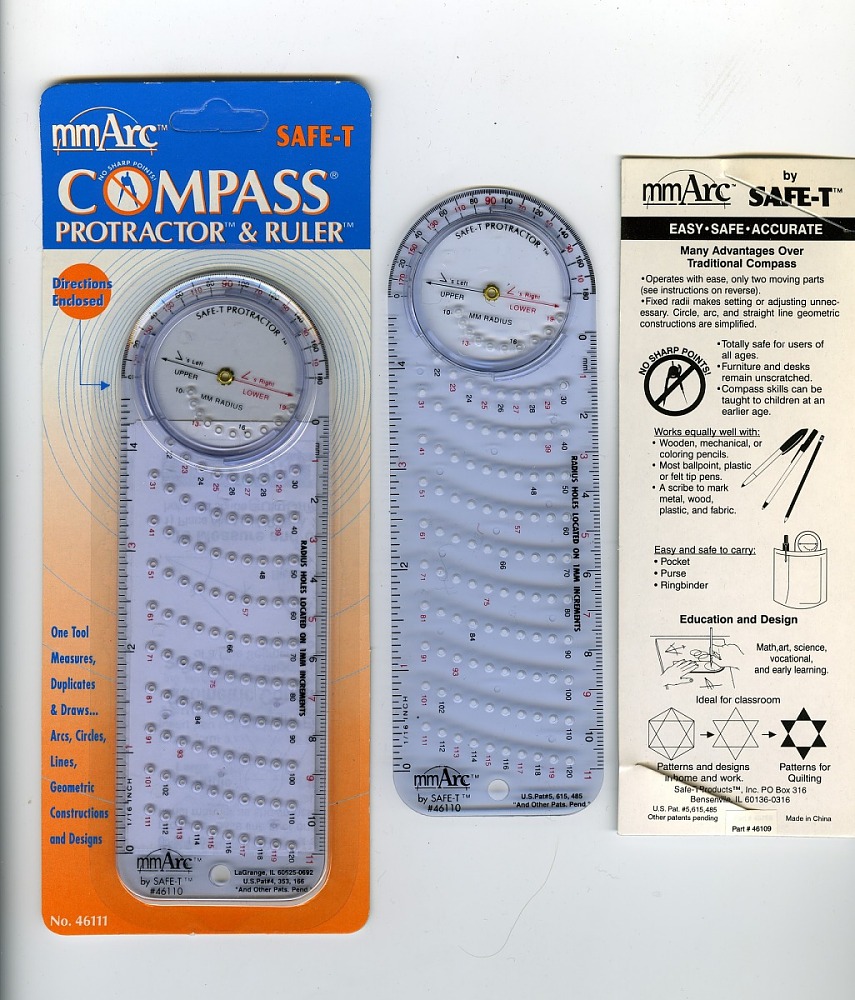 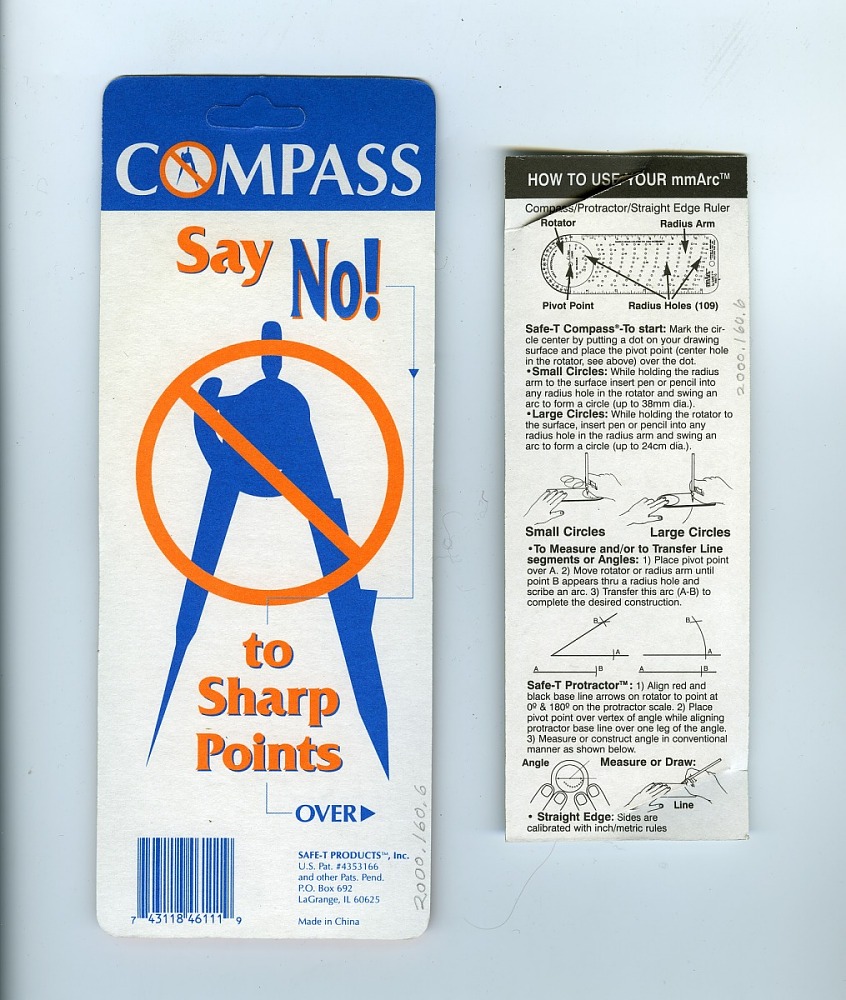 Description
These clear plastic instruments are roughly rectangular in shape, with a semicircular side at one end. A rotating disc is inset at that end. The disc has holes at distances of 10 to 19 mm from its center. The rectangular part of the instrument has ten rows of ten holes, at distances of 22 to 120 mm from the center of the disc. To draw circles, one fixes the disc at the center, places a pencil or other writing implement at the desired radius, and rotates either the disc or the rectangle.
The semicircular edge is divided to degrees and marked by 20s from zero to 180 in the clockwise direction and by 20s from 10 to 170 in the counterclockwise direction. The disc is marked: SAFE-T PROTRACTOR ™. It directs students to look at the upper, black numbers for angles facing left and at the lower, red numbers for angles facing right. A scale of 11 centimeters, divided to millimeters, is along one edge, and a scale of four inches, divided to 16ths of an inch, is along the other edge. The lower left corner is marked: mmArc ™ (/) by SAFE-T ™ (/) #46110.
One of the instruments is marked in the lower right corner: U.S.Pat#5,615,485 (/) "And Other Pats. Pend." It fits into a two-sided white cardboard of instructions. The bottom of this card has a label covering the mark: Part # 45759. The label is marked: Part # 46109. The card is also marked: Made in China.
The other instrument is marked in the lower right corner: LaGrange, IL 60525-0692 (/) U.S.Pat#4,353,166 (/) "And Other Pats. Pend." It is still sealed in its original display packaging, which describes the object as model number 46111 and indicates it was manufactured in China.
According to a company catalog in the accession file, Safe-T model number 45759 was the Safe-T Compass, so that mark on the instruction card is apparently a typo. Number 46109 was the mmArc that sold individually for $2.50 around 2000. Number 46110 sold in sets of 30 for $64.80 for classroom use. Number 46111 is not listed in the catalog but apparently was distributed to retail stores. Patent number 4,353,166 refers to a patent received by John S. Kettlestrings of Wheaton, Ill., in 1982 for the design of the disc. Patent number 5,615,485 refers to a patent received by J. Bruce Stoneberg, the president of Extra Measures, Inc., for the entire Safe-T Compass. For information on Safe-T Products and Extra Measures, see 2000.0160.04.
References: John S. Kettlestrings, "Toy-Like Instrument for Drawing Circles" (U.S. Patent 4,353,166 issued October 12, 1982); Bruce Stoneberg, "Instruments for Drawing Circles" (U.S. Patent 5,615,485 issued April 1, 1997); accession file. See also Bruce Stoneberg, "Compass" (U.S. Patent Des. 378,359 issued March 11, 1997).
Location
Currently not on view