In 1920, when the Nineteenth Amendment was ratified, there were no women serving in the United States Congress. In 1916 Jeannette Rankin of Montana became the first woman elected to the House of Representatives. She was the ranking Republican member of the House’s newly formed Woman Suffrage Committee and two years later opened the floor debate on the amendment. In 1918 she ran and lost a race for the Senate.

One hundred years later, 131 of the 541 senators, representatives, and delegates are women and a woman presides as Speaker of the United States House of Representatives.

“I may be the first woman member of Congress, but I won’t be the last.” 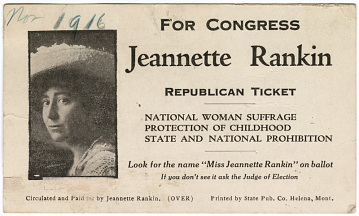 In 1965 Patsy Mink of Hawaiʻi became the first woman of color elected to Congress. In the thirteen terms she served, she championed women’s equality and coauthored Title IX of the Education Amendments Act of 1972. Title IX prohibits discrimination based on sex in any education program or activity that receives federal funding. 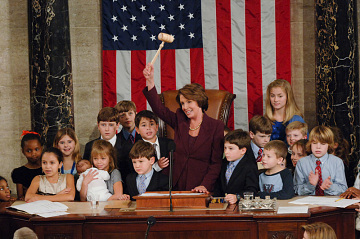 Courtesy of Nancy Pelosi and the U.S. House of Representatives This wooden gavel, a symbol of power and authority, was presented to Nancy Pelosi in 2007 when she became Speaker of the House.

Gift of the Honorable Nancy Pelosi

View object record
‹ The Women’s March, 2017 up Senators on Suffrage ›