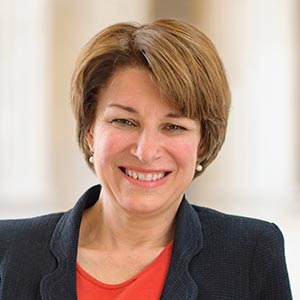 This year, we celebrate an important milestone in our democracy—the centennial of the Nineteenth Amendment guaranteeing women in America the right to vote.

We can never forget that women were not given the right to vote—women across our country fought for and won the right to vote. In my state of Minnesota, which was the 15th state to ratify the Nineteenth Amendment, it was women like Dr. Mary Jackman Colburn, Sarah Burger Stearns, Clara Ueland, and Sarah Tarleton Colvin who worked tirelessly to make it happen. When President Wilson refused at first to support a constitutional amendment to grant women equal voting rights, suffragists like Sarah Tarleton Colvin chained themselves to the fence of the White House. After weeks of similar protests and other advocacy for equal rights, President Wilson announced he had changed his mind.

The women’s suffrage movement encountered strong opposition every step of the way. The National Association Opposed to Woman Suffrage even published a piece of propaganda warning that if women were granted the right to vote, some states would be under “petticoat rule.” The pamphlet also provided a list of household cleaning tips for women, noting that there weren’t any cleaning solutions for a mud-stained reputation after bitter political campaigns. Posters were scattered across cities that depicted men at home taking care of babies and cooking and cleaning because they had been abandoned by their voting wives.

One hundred years later, I think we can safely say that America did not perish under “petticoat rule.” What did happen instead is that in 1920—in the first federal election in which women could vote—the total popular vote increased dramatically from 18.5 million to 26.8 million.

When I arrived in the Senate, there were only 16 women, led by the dean of the women senators, Senator Barbara Mikulski from Maryland. We now have 26 women senators, an all-time high. Someone once said that women should speak softly and carry a big statistic. I don’t agree with the “speak softly” part, but there is some merit to the big statistic. Maybe because it was harder for them to get where they are, I have found women senators to be accountable, to say what they are going to do, and to get it done.

And there is a lot to get done. One hundred years after the Nineteenth Amendment was ratified, the best way for us to honor the suffragists is to finish the journey they so courageously began. That means passing the Equal Rights Amendment. It means making sure that women have equal pay. It means ensuring that women’s voices are heard in our democracy and that every American’s right to vote is protected.

As the Ranking Member on the Senate Rules Committee, which has jurisdiction over federal elections, I have fought to break down barriers to voting and running for office. We should be making it easier, not harder, to participate in our democracy.

It is time for us to pass legislation to automatically register everyone to vote when they turn 18, and require states to allow eligible voters to register on the day of a federal election. It’s time to make it easier for first time voters and students to register and stop the intimidation and deceptive practices that prevent Americans from exercising their constitutional right to vote. And of course, it’s time to act to protect the security of our elections from both foreign and domestic threats that seek to undermine our most sacred democratic process.

If we are going to finish the work of the suffragists upon whose shoulders we stand today, we must ensure that women take their rightful place in every level of our government. We need to make it easier for women to run for office, including by allowing candidates for federal office to use campaign funds for child care, elder care, and health care premiums.

As we celebrate this centennial of the Nineteenth Amendment, it falls to all of us to keep working to get democracy right. It falls to us to ensure that everyone has a voice, that everyone can participate, and that our elected officials truly reflect the country they represent. That’s the kind of democracy that women suffragists struggled and sacrificed for 100 years ago. Now it’s our turn to take up their torch and finish the job.