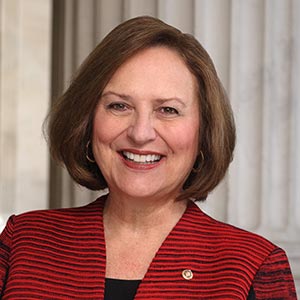 On the 100th anniversary of the ratification of the Nineteenth Amendment, it is important to pause and remember the women who fought tirelessly to secure this right for themselves and the generations of women who followed. The strong, courageous suffragists were pioneers and leaders. They recognized that women’s full participation in our public life would strengthen our republic.

I live in the Nebraska Sandhills, a region of grass-covered sand dunes that produces the world’s best cattle. Some see our rangeland as fragile, but in reality, it is robust, resilient, and powerful. It can withstand the Great Plains’ strong winds and droughts because of the diversity of cool and warm season grasses that grow there.

These grasses have extensive root systems, and each plays a role in the larger ecosystem. The cool season grasses, like Western Wheatgrass and Reed Canary grass, are hardy and long-lived. Some warm season ones, like Bluestem and Switch, hold the Sandhills together. Then there are other warm season grasses with distinct roles as well. Cattle love the beautiful Sand Love grass, and Sand Reed is the “workhorse” grass that is productive and grows despite adverse conditions.

Women involved in community and political life are like the broad array of our Sandhills grasses. We are all different, but we each contribute with our fortitude, daring, and tenacity. This diversity makes our entire country stronger, and our root system is all the women throughout our nation’s history whose firmness of mind and brilliance changed the world.

The suffragists of the late 19th and early 20th centuries paved the way for future women’s involvement in politics, including my own. Because of the trail they blazed, I was fortunate to have female political role models from Nebraska to look up to in my life. Among them are Kay Orr, Nebraska’s first female governor and the first female Republican governor in the United States, and Virginia Smith, who served as my congressional representative and was the first woman from Nebraska to hold a seat in the House of Representatives.

When I was first elected to the Nebraska Unicameral in 2004, a woman reporter asked me if I planned to focus on women’s issues. I asked her, “How do you define women’s issues?” She told me that women’s issues are “education and child care.” I replied, “Every issue is a women’s issue,” and I proceeded to list property tax relief, economic development, education, infrastructure, and many more.

I smile now as I think of that exchange (I didn’t smile then), but what I said to her remains true today—every issue is a women’s issue, and our different views on all topics provide for healthy debate.

In the Nebraska Legislature, I focused on roads, water, technology, agriculture, and education finance. In the U.S. Senate, I’ve added national defense to the list while maintaining my focus on those other issues. These are all women’s issues, not just the short list some think of as pertaining to women.

Public service is hard work—but women know about hard work. We are builders. We build relationships, families, communities, careers, and businesses. In the century since the Nineteenth Amendment was ratified, we have been able to bring that strength of character to elected office to build stronger states and a more secure and prosperous country.

We will never forget the path that brought us to where we are today, and the pioneers who fought for the rights of millions of women to participate in the core function of our republic. The story of women in American politics is far from over. Our history, our diversity, and the mentors we look up to will continue to serve as encouragement and inspiration for the generations of women who will write the next chapter.