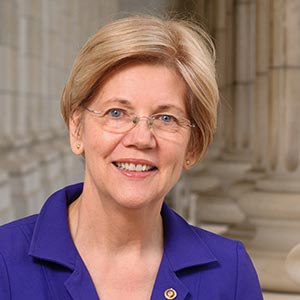 “The centennial of the Nineteenth Amendment is an opportunity to reflect on the power of raising our voices, organizing, and persisting until we see big, structural change in our country.”

But women changed the way things are—women who dedicated their lives to the cause of women’s suffrage, women across America who jumped feet first into politics, and women who continue to fight for equality every single day. I’m grateful down to my toes for them. The brave standard-bearers who fought for the Nineteenth Amendment guaranteeing women the right to vote were told over and over again to give up, but they persisted. Because of their persistence women have the vote today.

But we cannot celebrate women’s suffrage without talking about how these early efforts excluded Black women and other women of color and without recognizing the ongoing fight to end discriminatory laws, policies, and practices that keep Black Americans and other people of color from participating in our democracy. Today an aggressive effort to suppress votes has resulted in hours-long lines, polling places running out of ballots, eligible voters whose names were purged from voter rolls, burdensome voter ID rules, and a host of other despicable practices. When everyone votes, democracy wins, and that’s why I fight to level the playing field, to end racist voter suppression, and to make voting easier.

The centennial of the Nineteenth Amendment is an opportunity to reflect on the power of raising our voices, organizing, and persisting until we see big, structural change in our country.

On November 6, 2012, over 90 years after Congress ratified the Nineteenth Amendment, the Commonwealth of Massachusetts elected its first woman to the United States Senate: me. Until then, no woman had ever been elected senator of Massachusetts. In fact, plenty of people thought Massachusetts wasn’t ready to elect a female senator. So I decided to challenge the status quo one pinky promise at a time. Whenever I met a little girl on the campaign trail, I would bend down, take her hand, and say, “My name is Elizabeth and I’m running for Senate, because that’s what girls do.” And then we’d pinky promise to always remember that. Those pinky promises were declarations of hope. I wanted little girls all over Massachusetts to remember that we were in this fight together, and that they too could do anything they put their minds to. I made thousands more pinky promises when I ran for the Democratic Party’s nomination for president.

The truth is, we need more little girls, and little boys, to grow up engaged in our democracy. We need them to demand voting rights for all and help us finally pass a constitutional amendment to guarantee the right to vote. We need them to run our federal, state, and local governments, our businesses, our schools, and our hospitals. We need more women, especially women of color, to run for office and more people everywhere to join the fight to elect diverse female leaders.

On November 2, 1920, more than 8 million women in the United States first cast their ballots in a national election—and they set in motion changes that brought millions of women into fuller participation in our economy and in our democracy. One hundred years later, we still have a long way to go to make this country equal for people of every gender, race, ability, sexual orientation, and socioeconomic background. But let this anniversary remind us that we don’t have to accept the way things are. Instead, we have the power to come together, raise our voices together, persist together, and finally see progress made.