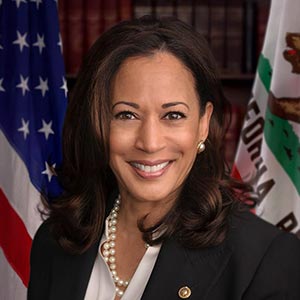 “As we continue on in the fight toward progress, the words of Coretta Scott King ring true: ‘Freedom is never really won; you earn it and win it in every generation.’”

Growing up, my mother was intentional about raising my sister and me as strong women. She knew we would face challenges, but she had an unfailing optimism that we would see what can be, unburdened by what has been.

I am inspired every day by the many women throughout our history who had the courage and vision to create progress—women like Harriet Tubman, Ida B. Wells, Sojourner Truth, and Mary Church Terrell.

It is this inspiration that has helped guide me throughout my career in public service. In fact, my mother used to say, “don’t sit around and complain about things, do something.” When I decided to run for District Attorney of San Francisco over 15 years ago, it was because I saw problems that could be fixed and I believed I could make the system better for all. No one like me had served in the role before. Not only did I win, becoming the first woman to hold that position, but I went on to become the first woman Attorney General of California and only the second Black woman in history to serve as a U.S. senator.

I am proud to join the women of the Senate in recognizing this milestone with the knowledge that our work is not done. Recently, I traveled to Selma, Alabama, to recognize the 55th anniversary of Bloody Sunday, when Americans shed blood and died as they marched for equal voting rights. In recent years, we have seen multiple attacks on the right to vote, including rollbacks on early voting and strict voter ID laws that make it harder for people to vote, particularly women, people of color, and low-income individuals. That is why—despite the progress made since the ratification of the 19th Amendment—our fight to ensure equal access is not over.

As we continue on in the fight toward progress, the words of Coretta Scott King ring true: “Freedom is never really won. You earn it and win it in every generation.”

Her sentiment is a reminder that as we acknowledge milestones, we must also take them as a call to action. And that the very nature of the fight for equality is that each generation’s contribution is not permanent. It is on all of us to be vigilant, but to also not be overwhelmed. There is never time to throw our hands in the air and give up. There is only time for us to roll up our sleeves and get to work. That is what the women before us did, and that is what we must continue to do.

I am proud to join the women of the U.S. Senate as we recognize the 100th anniversary of the ratification of the Nineteenth Amendment. Let us continue to stare adversity in the eye as we march toward progress for the next generation. Let us honor the work of the trailblazers who came before us. And let us be reminded that we will continue to rise, together.