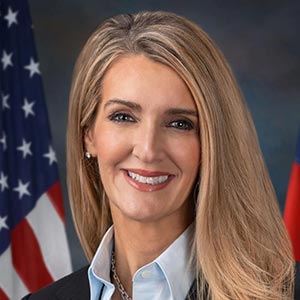 “A century ago . . . the suffragists were fighting for women’s right to vote. Since then, women have gone into space, won Pulitzer Prizes, built companies and served on the Supreme Court.”

As the newest United States senator, I spend time each week presiding over the Senate floor. Every time I am in that chair, I am reminded that being in the United States Senate is a very long way from where I started.

I grew up as part of the fourth generation on our family farm and was the first member of my family to graduate from college. I helped pay for school waiting tables and working at a department store. I spent nearly three decades in the private sector, rising from being a job seeker to a job creator, helping to grow companies and opportunity in our great state.

On January 6, 2020, I became the 57th woman in the history of our country to serve in the United States Senate. The very first woman to serve was Rebecca Latimer Felton, who was appointed to represent Georgia on October 3, 1922. Her selection, at age 87, was both a nod to and a direct result of her years of work on behalf of women’s suffrage.

At a time when women were supposed to stay home, Felton served as campaign manager, press secretary and adviser to her husband, who was a state legislator and congressman. She wrote columns and gave speeches on causes close to her, including advocating for education and training for girls. A suffragist, Felton had been instrumental in the passage of the Nineteenth Amendment giving women the right to vote. While a trailblazer in her own right, Felton’s legacy was clouded as her views were fraught with prejudice.

Governor Hardwick never intended Felton to actually serve—the next time the Senate would convene would not be until after the special election. But after he lost the special election to Walter George, the senator-elect recognized the significance of Felton’s lifetime of work. Senator-elect George allowed her to be sworn in ahead of him, officially making her the first female senator.

In her only speech on the floor of the Senate during the one day she served in the Senate, Felton said, “Mr. President, the women of this country are going to come and sit here. There may not be very many the next few years, but in time they will come. When they do I pledge that this body will get ability, integrity and unstinted usefulness.”

A century ago, Felton and the suffragists were fighting for women’s right to vote. Since then, women have gone into space, won Pulitzer Prizes, built companies, and served on the Supreme Court. Today there are 26 women serving in the United States Senate. We are businesswomen, teachers, ranchers, social workers, and veterans.

Five months ago, I took the Oath of Office in the Senate Chamber with Vice President Pence. I was surrounded by my husband and family. There was a moment during that ceremony when I thought back to that young girl growing up on her family’s farm. Could that very shy, hardworking girl have envisioned this?

I hope young women across the country know that with hard work, you can accomplish even more than you dreamed, that the American Dream is within reach. Thanks to the freedoms our country offers women, I have run a business, stood at the podium of the New York Stock Exchange, owned a sports team, and now, served our country in the United States Senate. As a senator, I am fighting each day to ensure all Americans the opportunity to achieve the American Dream.