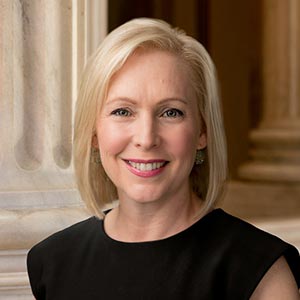 “We must honor them by challenging the inequities of our day and continuing the never-ending work of forming a more perfect union.”

One hundred years ago, when women finally won the right to vote, our nation took another step toward fulfilling its overdue promise of a more perfect union. In August 1920, decades of strategy and sacrifice culminated in the ratification of the Nineteenth Amendment. Much of that work began in my home state, New York, with suffragists like Susan B. Anthony, Sojourner Truth, and Inez Milholland.

My childhood was filled with my grandmother Polly—who was born before women won the right to vote and became an Upstate political powerhouse, and my mother Penny—a lawyer who championed LGBT rights, telling me the stories of these women.

Susan B. Anthony, of Rochester, and her mentor Elizabeth Cady Stanton are considered the mothers of the women’s suffrage movement. Anthony was a leading abolitionist who shared a lifelong friendship with Frederick Douglass and a prolific speaker and writer who traveled the country inspiring support for women’s suffrage. She pushed for a constitutional amendment for women’s right to vote, earn equal pay, and own property. Anthony was so committed to winning suffrage that she got arrested in 1872 for attempting to vote in order to bring her fight to the courts. When the judge ruled against her, she famously responded that the ruling “trampled underfoot every vital principle of our government. . . . I am degraded from the status of a citizen to that of a subject; and . . . all of my sex, are . . . doomed to political subjection under this, so-called, form of government.”

It was Sojourner Truth, however, who gave perhaps the most famous speech of the suffrage movement. Born into slavery as Isabella Bomefree in Ulster Country, New York, she changed her name to reflect her mission—to travel the country speaking the truth. She once said, “I will shake every place I go to.” She did exactly that in 1851 onstage at the Women’s Rights Convention in Ohio fighting for the equal rights of women and African Americans. She said “I am a woman's rights. I have as much muscle as any man, and can do as much work as any man. . . . As for intellect, all I can say is, if a woman have a pint, and a man a quart—why can't she have her little pint full. . . . I have heard the Bible and have learned that Eve caused man to sin. Well, if woman upset the world, do give her a chance to set it right side up again.”

Suffragists like Truth later inspired Brooklyn native Inez Milholland to insist African American women like Ida B. Wells be included in 1913’s Women’s Suffrage Parade in Washington, D.C. Milholland was a graduate of New York University School of Law, a labor activist, and a criminal attorney who once handcuffed herself to an inmate to understand the experience of her clients. Milholland’s passion led Alice Paul to make her the face of the movement during its final push for passage of the Nineteenth Amendment. She led the 1913 parade in a white cape atop a white horse, creating one of the movement’s most iconic images. Milholland traveled the world fighting for suffrage and ultimately gave it her last breath. Her last public words were “Mr. President, how long must women wait for liberty?” She was buried near Mount Discovery, which the town unofficially renamed Mount Inez shortly after her death. I was proud to work with other women’s rights champions to make that name official last year.

All three women died before the Nineteenth Amendment was passed and ratified, and never benefitted from their tireless work. Those of us who do must learn from their example and keep up their fight for a better future. I stood on their shoulders when I was sworn in as a United States Senator and when I joined 2017’s historic Women’s March. I feel their pride when I fight for universal paid leave and equal pay. And when we finally break that last glass ceiling, it will be their bold and brave vision we are fulfilling. We must honor them by challenging the inequities of our day and continuing the never-ending work of forming a more perfect union.