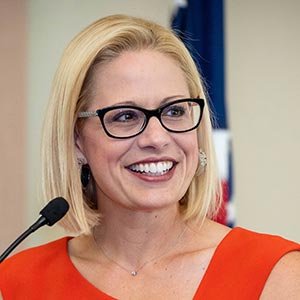 “It should surprise nobody that I'm a fan of more women in leadership, and Arizona has a long history of strong female leaders who get things done for our state.”

It should surprise nobody that I'm a fan of more women in leadership, and Arizona has a long history of strong female leaders who get things done for our state. In fact, Arizona helped lead the way in ensuring American women’s right to vote. Arizona became America’s 48th state on February 14, 1912—and almost immediately, suffragists led by the incredible Francis Willard Munds began advocating for a women’s suffrage initiative. The same year Arizona gained statehood, Arizona voters overwhelmingly voted in favor of giving women the right to vote, making Arizona the tenth state in which women won full voting rights.

In Arizona, we’re no strangers to accomplished women who’ve defied the odds and made their marks on our country. Shortly after the 1912 vote, Francis Munds continued her political work and became the first Senator elected to the state legislature. Around that time, another trailblazing Arizonan—Sarah Herring Sorin—became the first woman to argue a case before the United States Supreme Court without a male partner. By the way, she won.

One of my personal heroes is Sandra Day O'Connor—the original cowgirl from the Arizona desert. Of course, Sandra was our nation’s first female Supreme Court Justice, which is impressive enough. She also served in the Arizona Senate, where she was both feisty, and talented at working across the aisle and bringing people together. She was one of the first women to graduate from her law school, and she lived during a time when it was difficult for women to find their own footing in the workplace. Sandra Day O'Connor paved the way for women like me to pursue a career in law and public service.

Another one of my heroes is the incredible Rose Mofford. Thirty years before I was elected as Arizona’s first woman senator, Rose became Arizona’s first woman governor. A lot of people underestimated Rose—but she’s now credited with bridging a divisive time in our state's history. She was a trailblazer, an Arizona legend, and an inspiration to me—and she set the bar for what it means to get things done for our state. She had a beehive hairdo to die for, and a sense of humor to match. She was smart and witty and she always came to win.

Today, Arizona women continue to make lasting change. Nearly 70% of eligible Arizona women are registered to vote—and fabulous women mayors lead Arizona cities large and small ranging from Phoenix, Tucson, and Flagstaff to Fountain Hills, Tolleson, and Sedona. I am proud to partner with them and so many powerful women across the state as we follow in the footsteps of Francis Munds, Sandra Day O’Connor, and Rose Mofford to continue getting things done for Arizona and our nation.