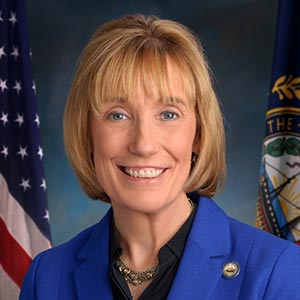 “Abigail Adams famously told John to ‘remember the ladies.’ Almost 250 years later, it is less and less likely that women will be forgotten. But there is still work to do.”

The women’s suffrage movement was on the precipice of achieving a decades-in-the-making success in 1918 when it was confronted with a new and deadly challenge: a global pandemic. The Spanish flu took hundreds of thousands of American lives and threatened to slow the momentum of the suffragist movement—stopping rallies and organizing events just when they were needed most.

Rather than retreating, women focused on providing care and support to their families and communities while they also transitioned to person-to-person grassroots advocacy. As they confronted this new challenge, women were able to draw on the resiliency and skills, as well as the respect and appreciation, that they had gained when they stepped up to fill the essential jobs vacated by men called to serve in World War I. Ultimately, thanks to the heroic efforts of countless suffragists over many decades, the Nineteenth Amendment granting women the right to vote finally became a reality in August 1920.

We mark this centennial in the midst of another global pandemic: a moment in time that reflects the substantial progress women have made, but that has also brought to the surface the limits of that progress and the fragility of some of our gains.

Since the suffragists secured a woman’s right to vote in 1920, women have made significant strides in elected office. In 2018 we saw a record number of women elected to Congress, and I am proud to be among the 26 women currently serving in the United States Senate. But in the hundred years since the ratification of the Nineteenth Amendment, 100 women have yet to serve as U.S. Senators—not even close. Although we are more than half the population, women are still far from holding half the seats in the Senate.

The story is even bleaker for women executives. No woman has served as President or Vice President. Only two women, my colleague New Hampshire Senator Jeanne Shaheen and I, have ever served as both Governor and U.S. Senator. Right now, there are only nine women serving as state governors, and 20 states have yet to elect a woman to their corner offices. Voters are increasingly comfortable welcoming women to a seat at the table, but not as much to the head of it.

I am deeply honored to represent a state that has had two elected women governors, two female Speakers of the House, four women Senate Presidents, and a woman Chief Justice—not to mention the first-ever all woman Congressional Delegation. But let there be no mistake: we still have far more work to do in New Hampshire and across the country to fully tap the experience and talent of women as we work to build a stronger, more equitable, and more resilient nation.

Despite having miles to go, we are seeing in real time the value and power of women’s suffrage and gains as this 21st-century pandemic unfolds. Women leaders in the area of public health sounded some of the first alarms about how devastating COVID-19 would be, expertly exercising the power that comes with public positions, and as a result, having far greater reach and arguably saving many more lives than they could have in 1918. Women in positions of responsibility and authority have been able to direct government’s response, bringing their professional and personal experience and talent to bear, just as men do.

While the scope of women’s leadership has greatly expanded since the Spanish flu of 1918, our current pandemic has also highlighted the fragility of women’s overall place in our society and economy. And that uncertainty makes it more important than ever that more women step up to run for, and serve in, office.

As more and more women have served in office, we have made strides in areas that have allowed more Americans—including women—to be fully included in our economy and civic life. Some of my proudest moments in public life have been expanding access to quality, affordable health care, passing marriage equality, and freezing college tuition at the university system—because each of these changes meant that a growing number of people would have the opportunity to successfully participate in the economy, and made clear that we value each individual’s talent and energy on equal footing.

I believe my experiences—as a woman, but also my unique personal and professional experiences—helped me prioritize issues and emphasize values aimed at making it possible for more and more citizens to contribute, collaborate, and compete in our economy—and thrive. I believe too that this enhanced economic and civic participation makes America stronger.

As the COVID-19 pandemic takes a devastating toll on our families, communities, economy, and country, the tenuous position that women hold in our society is increasingly clear. Employers want workers back as we reopen—but our childcare system is barely operational and will not be able to return to even its previous barely sustainable status without massive help from the federal government. Research shows that women are shouldering a disproportionate share of home schooling and housework while also continuing to work remotely (when fortunate enough to still have a job). And many of the most dangerous and essential frontline jobs in the pandemic are held by women.

So, the question laid bare by COVID-19 is whether the gains women have made—in suffrage and in elective representation—will be enough to forge a COVID-19 response that recognizes the needs and potential of all our people—including women and families. We would have a better shot of doing so if women made up at least half of our country’s elected representatives. But nonetheless, our advocacy must underscore that the strength of a country grows from its roots—the health, education, and inclusion of all of its people.

Abigail Adams famously told John to “remember the ladies.” Almost 250 years later, it is less and less likely that women will be forgotten. But there is still work to do. We owe the women who fought so hard for suffrage our own commitment to continue their work, and to reach for the goal of full participation and representation that they envisioned.