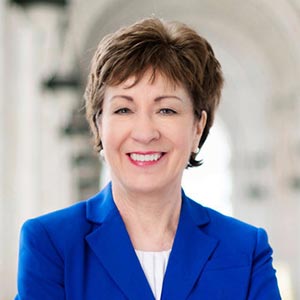 “The story of women’s suffrage is an anthology of remarkable biographies. We truly walk in the footsteps of giants.”

In 1776, as the Second Continental Congress was forging a new nation conceived in liberty, Abigail Adams admonished her husband, John, to “remember the ladies.”

Despite that advice, it took nearly a century and a half for women to achieve their rightful place as full U.S. citizens. On August 18, 1920, the courage and determination exhibited by generations of women and men were rewarded with the ratification of the Nineteenth Amendment to our Constitution.

It has often been said, as Emerson put it, that “there is properly no history; only biography.” The story of women’s suffrage is an anthology of remarkable biographies. We truly walk in the footsteps of giants.

This year, as we celebrate the Nineteenth Amendment’s centennial, Maine is celebrating its bicentennial. Less than a century after achieving statehood, Maine produced leaders who played key roles in granting women the right to vote. Katherine Reed Ballentine, daughter of the legendary House Speaker Thomas Brackett Reed, led the Maine Woman Suffrage Association. Author and activist Florence Brooks Whitehouse became a nationally known organizer and offered these words to opponents: “This you must know; the world is mine, as yours.” When the amendment came to the Senate floor, both of Maine’s senators, Bert Fernald and Frederick Hale, joined 54 colleagues voting in favor.

The amendment was ratified less than three months before the national election of November 2, 1920. Among the women eligible to vote for the first time was a 23-year-old newspaper reporter from Skowhegan, Maine. Today, Margaret Chase Smith is remembered as the first woman to be elected to both the House and the Senate, and the first woman to have her name entered into nomination for President by a major party.

Senator Smith once addressed the question of what is a woman’s proper place. Her famous short answer was, “Everywhere.” The rest of her answer describes the importance of the struggle and the success we celebrate on this landmark anniversary: “If there is any proper place for women today, it is that of alert and responsible citizens in the fullest sense of the word.”

I am proud to be among the 26 women of the Senate. While that is an all-time high—we were only nine when I joined the Senate in 1997—it still is only 26 percent. In the House, we are less than one-fourth, and less than one-third in state legislatures. Only nine of our 50 governors are women. At all levels of government, we must close the gap between being eligible to vote and being sworn into office.

We are making progress. For 16 years, from 1997 to 2013, I had the pleasure of serving in the Senate with Olympia Snowe, making Maine one of only three states to have two women in the upper chamber at that time. But expectations are changing. During my third campaign in 2008, my chief-of-staff’s then eight-year-old daughter asked him, “Daddy, can boys grow up to be Senators, too?”

We women of the Senate span the political spectrum, from liberal to conservative. We do share a special bond forged by similar experiences as women in public life who overcame certain barriers. This leads to a collaborative, pragmatic, problem-solving approach. At the same time, we reject the idea of a Women’s Caucus. We work across party lines, we meet regularly, but we don’t see the challenges our country faces as women’s or men’s issues.

May this centennial milestone for equality under the law strengthen our resolve to eliminate the glass ceiling for future generations of women.