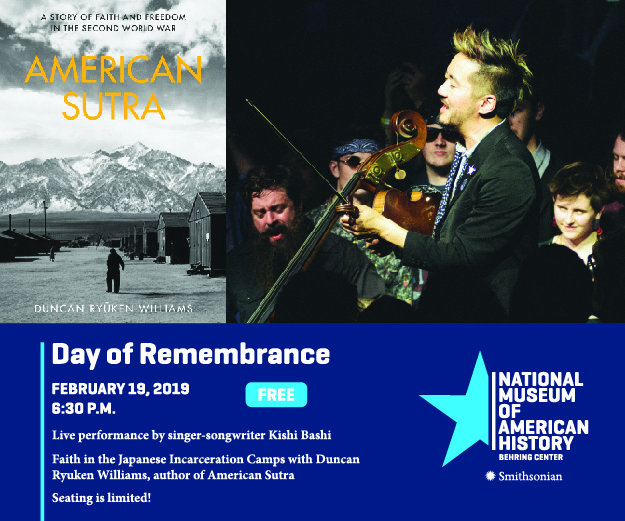 Seating is limited and is first come-first served.

In observance of the Day of Remembrance, which marks President Franklin D. Roosevelt’s 1942 signing of Executive Order 9066 and subsequent incarceration of nearly 120,000 Japanese Americans, the museum will host a free live performance by the award-winning composer Kishi Bashi and a guest lecture by renowned scholar Duncan Ryuken Williams.

In Omoiyari: a Songfilm by Kishi Bashi, composer Kaoru Ishibashi (professionally known as "Kishi Bashi") embarks on a personal quest by creating music in locations relevant to the Japanese American Incarceration. Omoiyari is a genre-breaking cinematic exploration that fuses history and art to examine the complexities of the human condition. NPR’s All Songs Considered listed Kishi Bashi as a favorite new artist, praising his work as "a radiant, uplifting soundscape."

USC professor Duncan Ryuken Williams is the author of the new book American Sutra: A Story of Faith and Freedom in the Second World War, which for the first time explores the role of religion – particularly Buddhism – in the Japanese American incarceration. George Takei has called American Sutra "a must-read for anyone interested in the implacable quest for civil liberties, social and racial justice, religious freedom, and American belonging."

Day of Remembrance 2019 is made possible with the support of Lilly Endowment Inc., the USC Shinso Ito Center for Japanese Religions and Culture, the National Japanese American Memorial Foundation, and the Japanese American Veterans Association.