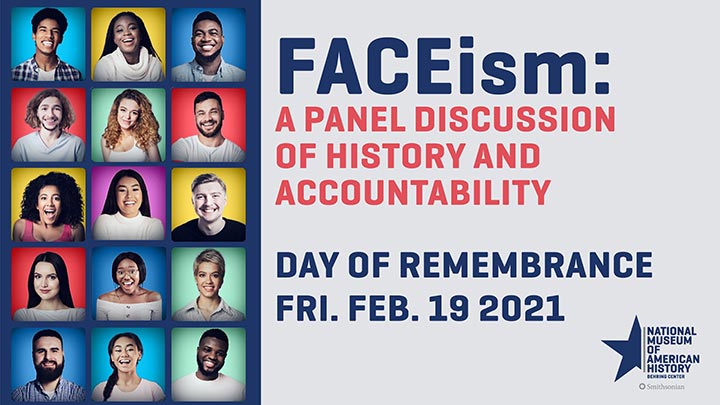 FACEism: A panel discussion of history and accountability

How to watch: The program will be available on the museum's YouTube channel and Facebook page. Register to attend on Eventbrite.

February 19 is the Day of Remembrance, the annual recognition of President Franklin D. Roosevelt’s signing of Executive Order 9066 and the subsequent incarceration of nearly 120,000 people of Japanese descent living mostly in Washington, Oregon, and California. To commemorate the thousands of people affected by this human rights abuse, our discussion this year features news anchor and filmmaker David Ono and his documentary series FACEism, which examines how racism is rooted in often ignored and painful histories.

"FACEism is when we make quick, often unfair, judgments about people we don't even know, ignoring the fact there is so much more behind their face."

Panelists will consider episodes from the documentary series and explore community activists’ further discussions about history, accountability, and injustice in our past, present, and future. The episodes are: “FACEism: How COVID-19 is Resurfacing U.S. History Against Asian Americans” and “President Reagan’s Apology for the U.S. Internment [Incarceration] of Japanese Americans during World War II.”

The National Museum of American History welcomes visitors of all ages and abilities. Real-time captioning (CART) will be provided for online programs. For other questions about accessibility, please email nmahprograms@si.edu. Two weeks’ notice is preferred.