A historic day for the U.S.A.

Many of today’s newspaper headlines describe the victory of presidential candidate Barack Obama as “historic.” The election might qualify as historic for a number of reasons, but with the selection of this country’s first African American president, the issue of race is what’s on most people’s minds. 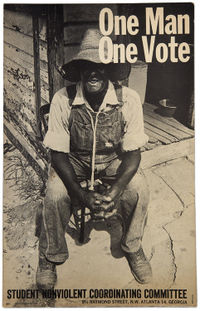 This ca. 1963 poster from the museum’s collection makes the point well. At that time, when Obama was about two years old, African Americans and other minorities were engaged in a protracted and sometimes violent struggle to exercise their full rights as citizens of this country. That same year, civil rights leader Martin Luther King, Jr. proclaimed his dream that “my four little children will one day live in a nation where they will not be judged by the color of their skin but by the content of their character.”

The long-term significance of this election to America’s history of race relations remains to be seen, and will surely be the topic of many debates. But when you consider the change that has occurred over the course of a single lifetime, it is hard to describe the occasion as anything but “historic.”

Matthew MacArthur is the museum’s Director of New Media.