Editor’s Note: Today’s post is the fourth in a series of six about the museum’s work in Julia Child’s kitchen. Anneliese Bustillo is a Museum Studies graduate student at The George Washington University.

I often claim that I can make homemade whipped cream. By that, I mean to say that I can pour heavy whipping cream into my KitchenAid Artisan mixer, turn it to the highest speed, and walk away. I return in a few minutes to check that peaks have formed. Then, I add some sugar, mix the cream a little more, and voila! Needless to say, I'm no aficionado of the culinary arts. In fact, I often take all the credit for the work of my stand mixer. I was therefore nervous the first time I entered the kitchen of cooking legend Julia Child.

My nerves quickly disappeared as I stepped inside the kitchen for the first time. It became immediately evident that Julia, too, cherished her stand mixer and the many other gadgets and appliances she owned. I was in the workspace of a professional chef, but this particular room was nothing short of warm and welcoming; I felt like I was stepping into a friend’s kitchen. Julia seemed more real to me than I ever expected.

Anyone who has visited the Bon Appétit! exhibition knows that all the corners and walls are covered with the cookware used by Julia. Every day I worked in the kitchen was full of new discoveries; I constantly learned about kitchen tools that I never knew existed. One day, I came across an object that appeared to be a small silver platter with a tall rim and a handle large enough for one finger. Over the finger loop were the initials “PCC,” those of Julia’s husband, Paul. I looked at the piece for a good five minutes, unsure of what to write in the “object name” section of the condition checklist. Finally, I gave in and searched through the records to find that this “silver platter” was in fact a wine taster. As much as I would love to say that idea crossed my mind, I was not even close. 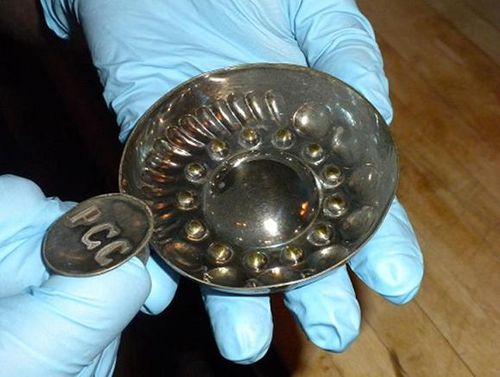 The wine taster with the initials "PCC."

Every week in the kitchen, I had little adventures like this. There was so much to discover: Julia had salad spinners for washing greens, a knife solely to devein shrimp, a cherry pitter, and a KitchenAid stand mixer engraved with the words “Bon Appétit!” One day, I noticed that Julia had an apple slicer (just like mine!) that cores the fruit and produces eight perfectly even pieces. It may be a superfluous device, but in my mind, seeing that Julia owned one of those slicers seemed to validate that it’s a useful gadget in any kitchen. It’s these moments that made me feel closest to Julia. 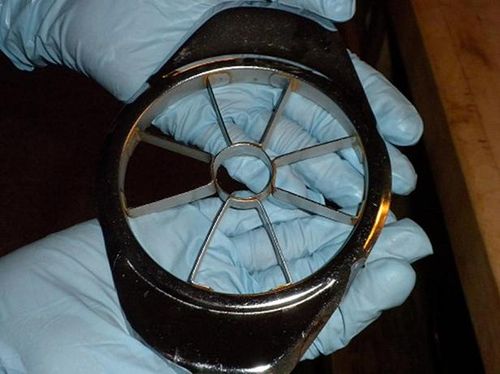 As we examined the objects one by one, we made notes about how it had changed since it was first accessioned and suggestions for how to best preserve the object, so that the Smithsonian can display it for generations to come. I feel as though our work has been important and necessary, but, above all else, it has been enjoyable. I imagine, years from now, I will still be gushing over having that once-in-a-lifetime opportunity to step into Julia Child’s kitchen and experience the feeling that she still lives on through the room and its objects.

Anneliese Bustillo is a Museum Studies graduate student at The George Washington University.