The movie 42 has introduced many to the story of Jackie Robinson. Archivist Cathy Keen explores one interpretation of the baseball player's life published early in his career.

Comic books help us escape reality. We read about the adventures of fictional superheroes with supernatural abilities. But this comic book is different. It inspires readers not with the hero's supernatural abilities but by his courage, poise, and dignity in the face of tremendous hostility, and by his natural gifts of speed, power and agility. 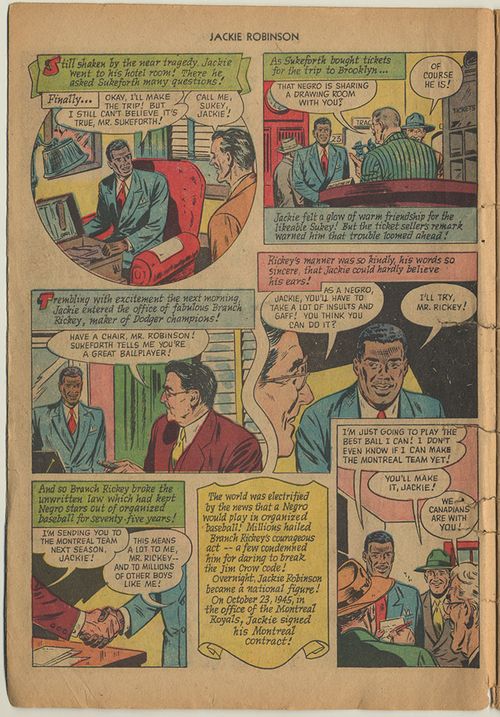 "As a Negro, Jackie, You'll have to take a lot of insults and gaff! You think you can do it?" asks Branch Rickey in the third panel of this page. Archives Center, National Museum of American History.

This comic was published in 1950, during Robinson's career and three years after he debuted with the Dodgers. The abuses he endured are addressed in a vague, sanitized way in the comic book, which mostly covers his minor league career and his call-up to the Dodgers. (This comic was part of a series.) Brief reference is made to "the Jim Crow code." The words "race" and "racist" are never used. Instead, the words "scheming foes," "sinister plotters," and "Jackie's enemies" are used to describe the abusers, virtually implying that there were only a handful of bad apples who made his life unpleasant.

As is well documented, Jackie endured much worse than that. Base runners slid hard into him. There were beanings—attempts to hit him in the head with pitches—along with death threats, and even a petition against him by his own teammates. The comic includes a couple of scenes of the famous meeting between Robinson and Dodger President Branch Rickey, in which Rickey offered Robinson a Dodger contract, but warned him of some of the abuse he could expect if he accepted the offer. Surely he used stronger language than, "As a Negro, Jackie, You'll have to take a lot of insults and gaff! You think you can do it?" 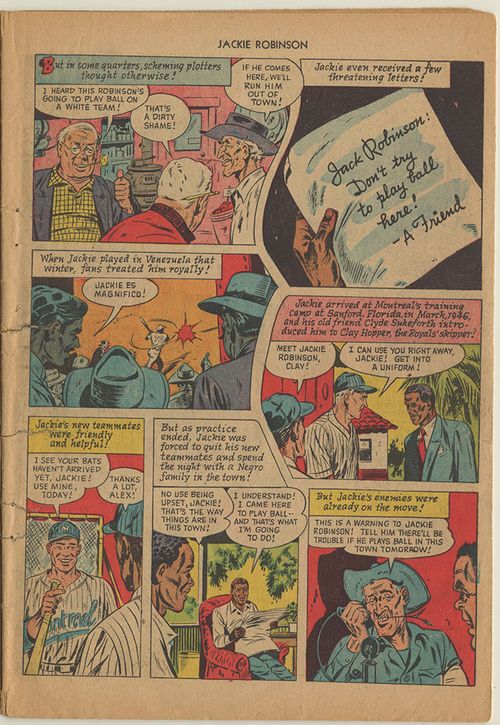 "I heard this Robinson's going to play ball on a white team!" says one character in the first panel of this page of the comic book. "That's a dirty shame!" says another. "If he comes here, we'll run him out of town!" Archives Center, National Museum of American History.

Another example is the page, illustrated here, that informs us that in Montreal, where Robinson joined the Dodgers' minor league team before his rookie year with the Dodgers, "Jackie even received a few threatening letters!" These too, probably contained stronger words than "Jack Robinson: Don't try to play ball here!  — A Friend."

The comic also briefly mentions that in Jersey City, where Robinson's team, the Montreal Royals, opened their season in 1946, "Jackie ignored the taunts of his enemies!" but does spend several frames describing Robinson's base running heroics. 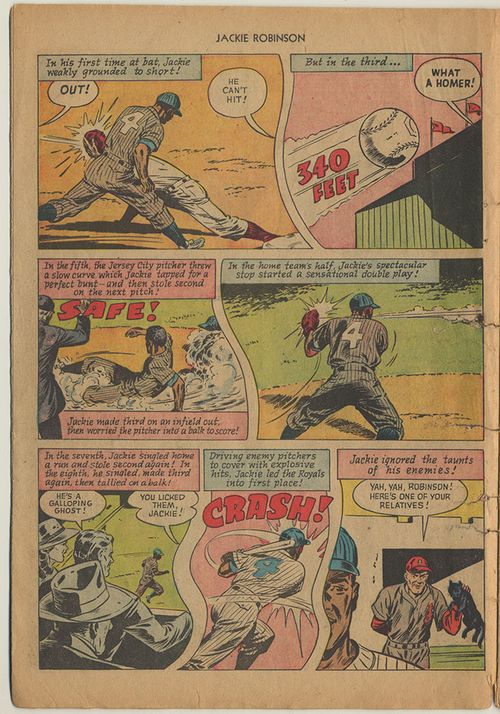 In the final panel, a rival team member holds up a black cat, saying, "Yah, yah, Robinson! Here's one of your relatives!" Narrative text explains that "Jackie ignored the taunts of his enemies!" Archives Center, National Museum of American History.

The comic spends not even one frame on Robinson's major league debut game on April 15, 1947, one of the most pivotal moments in baseball history and civil rights history, instead concentrating on a game a few days later in which he got his first hit, a home run, against the New York Giants at the Polo Grounds. Optimistically, the comic gives a lot of power to this particular home run: "Jackie's first homer struck a death blow to intolerance which kept Negroes out of organized baseball for 70 years!"

Unfortunately, it wasn't truly a death blow. Many teams resisted integration for years, and the last team to bring in a black player, the Red Sox, didn't do so until 1959, twelve years after Robinson's debut.

Why were the sharp edges of reality so blunted in this comic book? There are many possible reasons—protecting children who idolize the players, avoiding offense, wishful thinking—but perhaps one was to focus on the game. 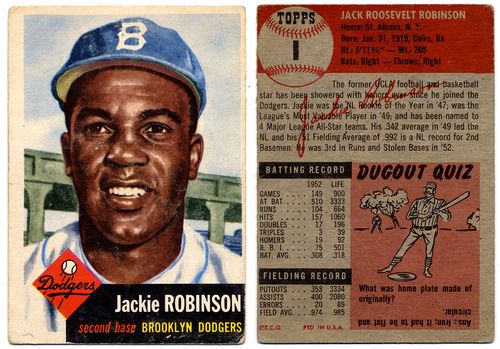 "As the first black player in major-league baseball, Jackie Robinson was influential, in part, because he kept playing after the rough early years, for a total of ten seasons," wrote Margaret Talbot in a recent New Yorker article about N.B.A. player Jason Collins who recently announced that he is homosexual. "We need to see what happens after the barriers are broken, and we like to see the people who broke them doing what they wanted to do in the first place: playing the game they love."

Cathy Keen is an archivist in the museum's Archives Center. She has also blogged about one of her favorite teams, the Nationals. Comic books can be powerful teaching tools. Explore a 1960s comic book on the civil rights movement with children with this activity guide.