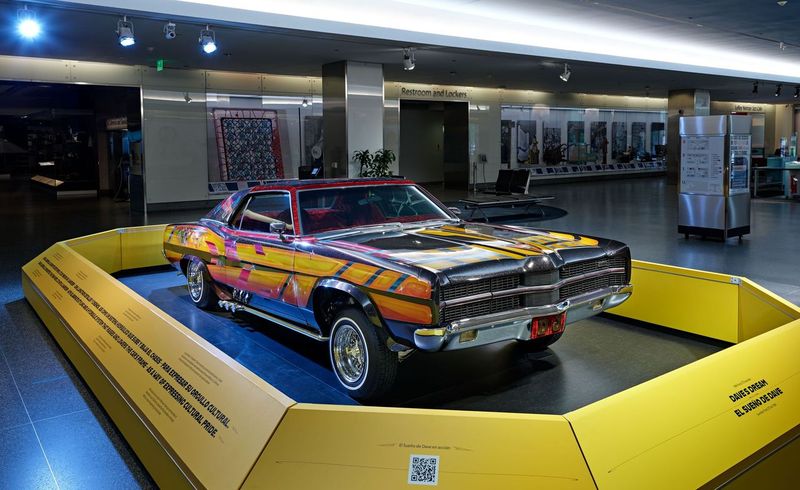 The Smithsonian’s National Museum of American History will showcase “Dave’s Dream,” a modified 1969 Ford LTD Lowrider, beginning today. The car is named for David Jaramillo of Chimayo, New Mexico, who began customizing the car in the 1970s. After his death, Jaramillo’s family and local artisans completed the modifications that he had planned. “Dave’s Dream” won several “first” or “best in show” awards in area competitions.

“Dave’s Dream” takes center stage at the museum’s first floor, just ahead of the opening of “¡Presente! A Latino History of the United States” in the Molina Family Gallery in mid-June, the first exhibition of the new National Museum of the American Latino.

Lowriding is a family and community activity that is an artistic expression and an expression of pride. Creative paint schemes and custom upholstery make each lowrider unique and culturally significant. Hydraulic lifts enable lowriders to hop, making the cars seem alive and animated.

“Lowriding is a reflection of the Mexican American post-war experience,” said Steve Velasquez, the museum’s curator of cultural and community life. “Cars tell stories of individuals and communities, and car clubs are a reflection and extension of that community. The social aspects, which include support through fundraisers and other activities, are 90% of the cultural expression while the cars represent 10%.”

The National Museum of American History, located on Constitution Avenue N.W., between 12th and 14th streets, is open Friday through Tuesday between 10 a.m. and 5:30 p.m. Admission is free and passes are not required. The doors of the museum are always open online and the public can follow the museum on social media on Twitter, Instagram and Facebook. For more information, go to https://americanhistory.si.edu. For Smithsonian information, the public may call (202) 633-1000.